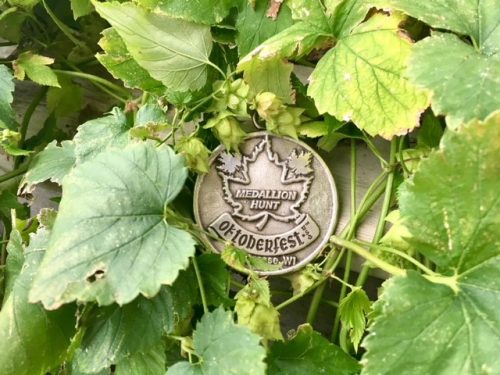 After searching with her husband for the past 30 years, Amy Ellingson found the 2020 Oktoberfest Medallion Thursday morning under a pavilion pole at Bluffview park.

“I kind of wanted to jump up and down and yell,” Amy said. “I just couldn’t believe that I actually had it in my hand.”

She said she immediately went to find her husband, Bill, and show him the prize.

“It is the first time in all the years we’ve been married that I’ve ever seen her red in the face,” Bill joked.

It was not a simple find. Amy had to stick her hand into the middle of posts holding up the pavilion shelter.

“It took me three times to get my hand in there and pull it out,” she said. “I turned it over, and there was the maple leaf, so it was pretty exciting.”

Amy is a retired school teacher from La Crosse Logan High School. In her years of teaching, she spent many mornings searching for the medallion before class.

“Oftentimes, she would be teaching in wet shoes,” Bill said.

Amy and Bill had help from their sons Mark and Matt in the effort. She will now collect the entire prize package, which includes $500 cash and a swag basket of Altra Federal Credit Union & Oktoberfest goods.

The couple said they are thinking of donating some of the money to a scholarship program at Logan High School.

The hunt is sponsored by Altra Federal Credit Union. One clue per day was issued starting September 14. Ten clues are prepared, but Ellingson found the Medallion after just four were released.