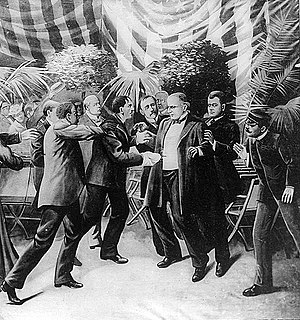 William McKinley was six months into his second term as president in September of 1901, when an anarchist shot him during the Pan-American Exposition in Buffalo, New York. Shooter Leon Czolgosz had been waiting in a line of people being greeted by McKinley, and covered his hand with a cloth to hide the gun.  The day after the shooting, a newspaper from Oshkosh carried headlines President McKinley Still Lives, The World Condoles, and The Villain Not Alone, suggesting the shooter had an accomplice.  When McKinley died 8 days after being wounded, a La Crosse newspaper demanded answers from scientists on why their 20th century technology couldn’t save the president’s life.

New vice president Theodore Roosevelt succeeded McKinley.  Just days before the assassination, Roosevelt had traveled to the Minnesota State Fair, where he would deliver one of his most famous quotes: “Speak softly, and carry a big stick.”  He explained that he was talking about speaking courteously to foreign governments.

The Continental Clothing House had locations in La Crosse, Chicago, Oshkosh, and Appleton.  The store was selling back-to-school wear, such as boys’ suits with knee-length pants for under $3, and young men’s suits for $12.50, advertised as better than any $15 suit anywhere else.

The Listman Mill in La Crosse was selling Marvel Flour.  A newspaper ad said other flours removed the nutrients that help brain, bone, and muscle, leaving only starch, which was “totally without food value.”  But Marvel Flour kept the nutrients in, and was a kitchen favorite in 1901, yesterday in La Crosse.