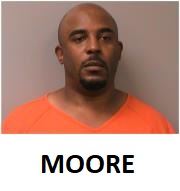 This guy had $4000 hidden in his shoes, apparently including money from a recent drug deal.

Frederick Moore of Chicago is now charged with dealing fentanyl in La Crosse.

Police arrested Moore this week after a deal involving an undercover informant.

Investigators found Moore carrying fentanyl, and hiding thousands of dollars inside his shoes.

Moore claimed he was in town to visit a cousin, but the informant says the only reason Moore comes to La Crosse is to sell drugs.