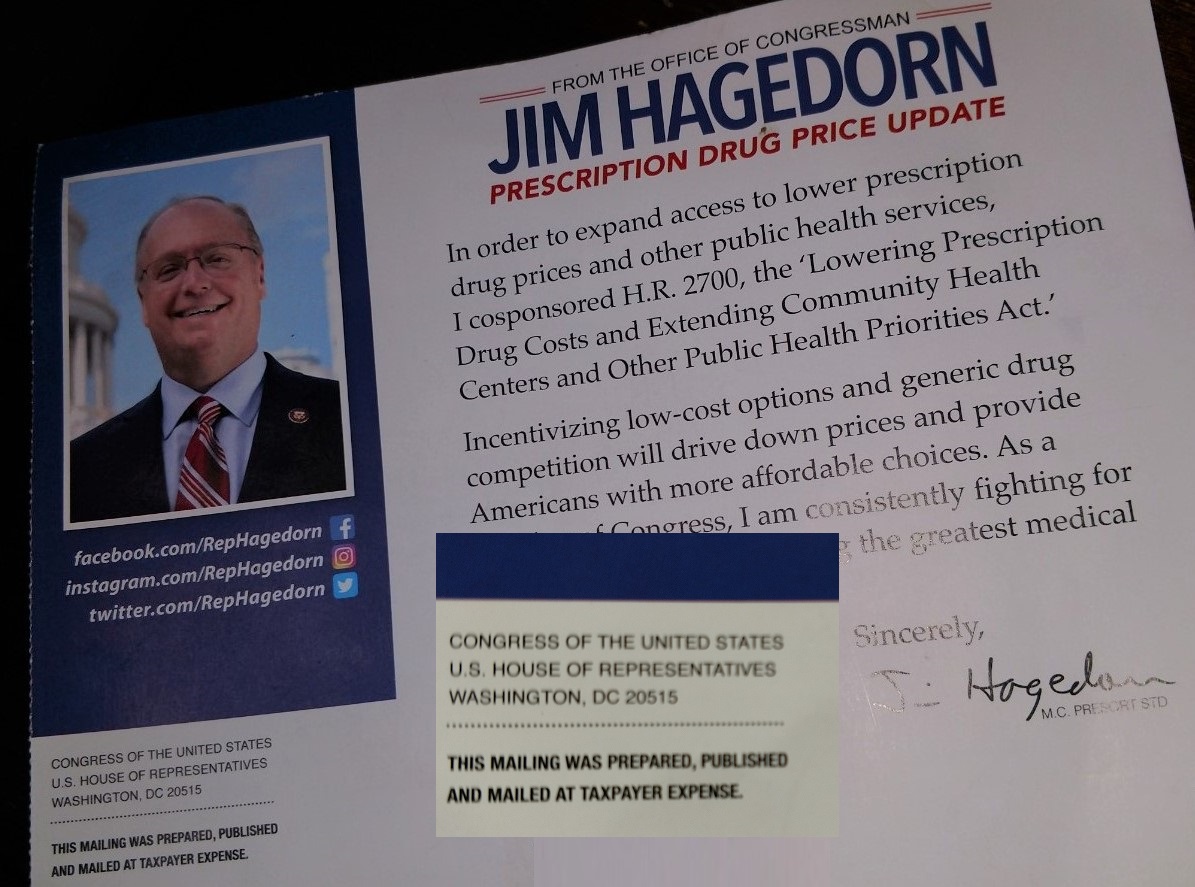 MINNEAPOLIS (AP) — The head of the Democratic Party in Minnesota denounced Republican U.S. Rep. Jim Hagedorn on Wednesday for heavy spending on taxpayer-financed mailings to his constituents and called for the House Ethics Committee to investigate.

Democratic-Farmer-Labor Party State Chairman Ken Martin made the call at a news conference after the Star Tribune reported that emails between Hagedorn and his staff show he was personally involved in decision-making about the mailings. He has blamed staff for exhausting around a fifth of his $1.4 million official office budget on mailings alone in the first three months of the year. He fired his chief of staff, Peter Su, in mid-June over the issue.

“This meant that Hagedorn spent as much of our taxpayer dollars on mailers as the average congressional office spends on everything else,” Martin told reporters. “It seems clear to us that was using his tax dollars to prop up his failing campaign.”

Hagedorn is seeking a second term in southern Minnesota’s 1st District. He faces a strong challenge in a rematch with Democrat Dan Feehan.

“The DFL is lying about the facts in this story to give life to a non-issue and prop up their ultra-liberal candidate, Dan Feehan, who’s radical left-wing views don’t fit the First District,” Hagedorn said in a statement issued through his campaign committee.

The Minnesota Reformer news site and the Star Tribune have reported that much of the printing work was contracted out to a company owned or partly owned by John Sample, a part-time staffer in Hagedorn’s congressional office, and to Abernathy West LLC, a company incorporated in Delaware with no publicly listed owners. Hagedorn’s congressional office and campaign did not respond to questions Wednesday about who controls that company.

Tom Rust, staff director and chief counsel for the House Ethics Committee, which is controlled by Democrats, declined to comment to The Associated Press about the allegations or the possibility of an investigation.

The Star Tribune obtained emails from a former staffer who insisted on anonymity for fear of retribution. They show that the congressman, in both 2019 and early 2020, managed at least some aspects of the constituent mailings and was aware of the volumes.

“We should send an updated mail piece on Cambria,” Hagedorn wrote on Sept. 5 to several senior staffers about a countertop manufacturer based in his district, in just one example cited by the newspaper. “Our successful bipartisan efforts to punish China for illegal dumping of quartz products and stealing intellectual property has helped to defend Le Sueur-based Cambria and 1,000 good-paying jobs in southern Minnesota.”

Hagedorn said in his statement that he will stay within the $1.4 million he was allotted for the year and that all of the mail his office sent to southern Minnesota was cleared by the Democratic-controlled House Administration Committee. He said the mailings were meant to inform constituents about his town meetings and work on issues important to the district.

The congressman also insisted that the “nuts and bolts” of preparing and sending the mailings was “fully delegated” to his former chief of staff, whom Hagedorn said he fired the day after he became aware of the issue. He said he immediately hired outside counsel to conduct a review and notified the Administration and Ethics Committees. He said the findings of the internal review will be provided to the committees and the public.

Craig Holman, a lobbyist and ethics expert with the watchdog group Public Citizen, said at Martin’s news conference that he believes Hagedorn violated House rules on spending their office budgets. “They cannot be used for personal benefit of the lawmaker, the lawmaker’s family or any staff member of the lawmaker,” he said.

Holman said the consequences Hagedorn might face would depend on how directly he was involved in the decisions. He expects Hagedorn will at least be ordered to reimburse the government for any improper payments and that he could be reprimanded or censured by the full House.