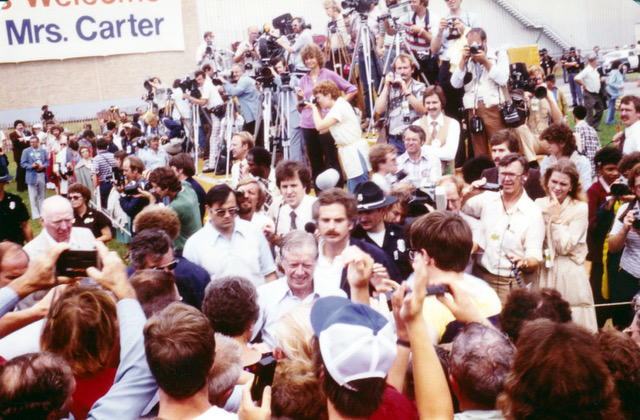 In August of 1979, President Jimmy Carter took a Mississippi River cruise on the Delta Queen, along with First Lady Rosalynn and their daughter Amy. The riverboat did not make an official stop in La Crosse, but on August 19th, the Delta Queen spent the afternoon in Prairie du Chien. There, the president spoke about energy policy at a 3M Company picnic and took a jog around the PDC High School track.

While at 3M, Carter also signed a wall-sized mural of the Delta Queen, based on a picture by local photographer and 3M employee Griff Williams. The signed wall photo eventually was moved to a local history museum in Prairie.

The Wisconsin Touring Theatre Company from UW-La Crosse took its last tour that summer, ending a five-year run of performing summertime shows around the state. The final performance was a production of “Twelfth Night” at West Salem High School. UW-L would begin its “Summerstage” shows at the Toland Theatre the following year.

Disco ruled the radio, but the biggest hit of the year was the rock tune “My Sharona” by the Knack, which topped the charts in the summer of 1979.