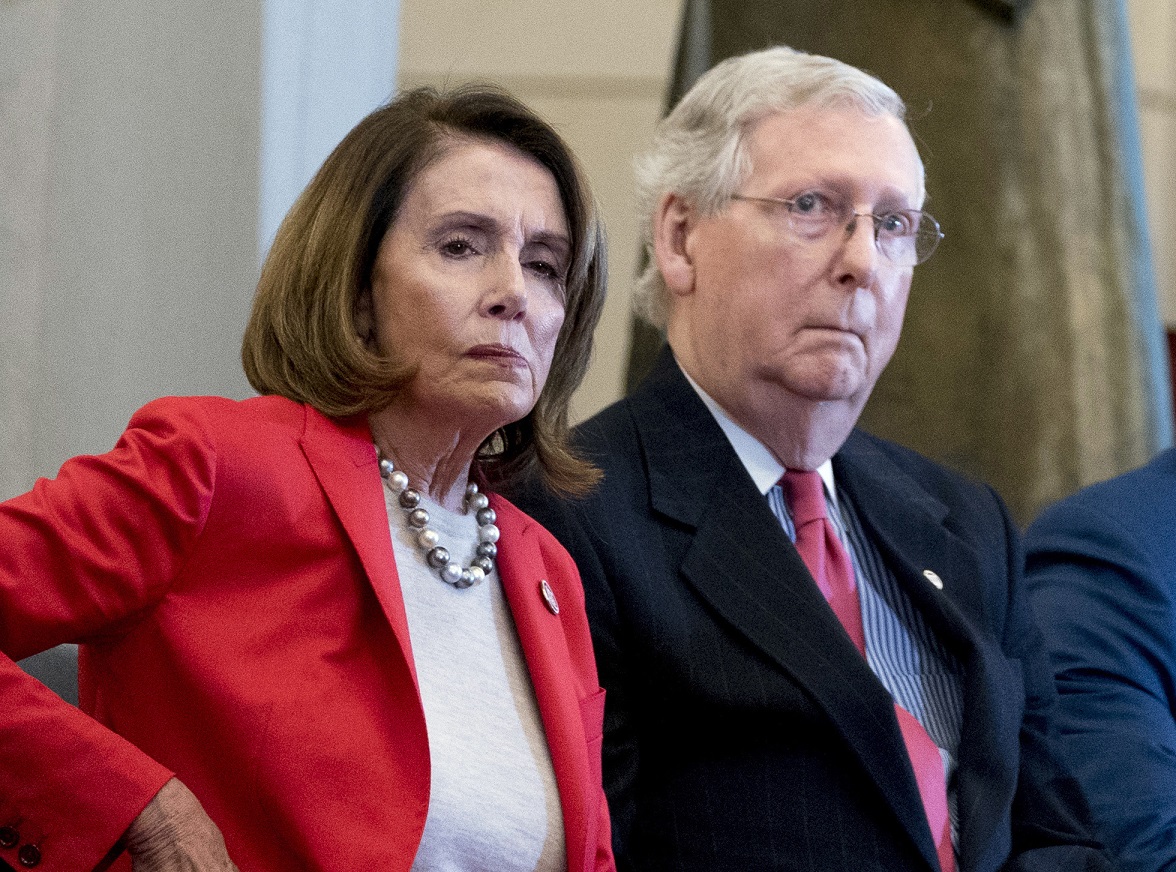 WASHINGTON (AP) — With talks on emergency coronavirus aid having stalled out, both sides played the blame game Thursday rather than make any serious moves to try to break their stalemate.

Washington is emptying, national politics is consuming the airwaves and the chasm between the warring sides appears too great for now.

All indications are talks will not resume in full until Congress resumes in September, despite the mounting coronavirus death toll. The Republican-led Senate left DC on Thursday for recess until September — it did delay that recess a week — without coming to a resolution, while the Democratic-led House approved its own relief package back in mid-May.

House Speaker Nancy Pelosi pressed the case for funding for the U.S. Postal Service, rental assistance, food aid and rapid testing for the virus at her weekly press event, blasting Republicans as not giving a damn and declaring flatly that “people will die” if the delay grinds into September.

“Perhaps you mistook them for somebody who gave a damn,” Pelosi said when asked if she should accept a smaller COVID-19 rescue package rather than endure weeks of possible gridlock. “That isn’t the case.”

All of the chief combatants have exited Washington after a several-day display of staying put as to not get blamed for abandoning the talks. The political risk for President Donald Trump is continued pain in U.S. households and a struggling economy — both of which promise to hurt him in the September campaign. For Democrats, there is genuine disappointment at being unable to deliver a deal but apparent comfort in holding firm for a sweeping measure instead of the few pieces that Trump wants most.

At the White House, Trump suggested that one main holdup is the amount of money Democrats want for cash-strapped states and cities, which he dismissed as “bailouts.” It’s a view shared by top Republicans.

A modest Trump administration overture on Wednesday to restart talks generated nothing but stepped-up carping and accusations of bad faith.

Across a nearly empty Capitol, the Senate’s top Republican sought to cast the blame on Pelosi, whose ambitious demands have frustrated administration negotiators like White House chief of staff Mark Meadows.

“They are still rejecting any more relief for anyone unless they get a flood of demands with no real relationship to COVID-19,” said Majority Leader Mitch McConnell, R-Ky. McConnell has kept the talks at arm’s length, nursing deep divisions among Republicans on the foundering relief measure.

Among the items lost is perhaps $10 billion in emergency funding for the Postal Service to help improve service as its role in the fall election takes on greater importance, given an expected surge in mail voting because of the coronavirus pandemic. Trump is against $3.4 billion demanded by Pelosi for helping states with the crush of mail-in ballots.

Trump seemed to take advantage of the stalemate to press his case against voting by mail. He said Thursday on Fox Business Network’s “Mornings with Maria” that among the sticking points were Democrats’ demand for billions of dollars to assist states in protecting the election and to help postal workers process mail-in ballots.

“They need that money in order to have the post office work so it can take all of these millions and millions of ballots,” Trump said. “If they don’t get those two items, that means you can’t have universal mail-in voting because they’re not equipped to have it.”

The White House and congressional leaders are far apart on the aid for shoring up households, reopening schools and launching a national strategy to contain the virus, which has infected more than 5.2 million people in the United States and has killed more than 166,000, according to figures compiled by Johns Hopkins University.

With the House and Senate essentially closed, and lawmakers on call to return with 24 hours’ notice, hopes for a swift compromise have dwindled. Instead, the politics of blame have taken hold, as the parties focus on this month’s presidential nominating conventions and lawmakers’ own reelection campaigns.

For Americans, that means the end of a $600 weekly unemployment benefit that has expired, as has a federal ban on evictions. Schools hoping for cash from the federal government to help provide safety measures are left empty-handed. States and cities staring down red ink with the shattered economy have few options.

Trump’s executive actions appeared to provide a temporary reprieve, offering $300 in jobless benefits and some other aid. But it could take weeks for those programs to ramp up, and the help is far slimmer than what Congress was considering. More than 20 million Americans risk evictions, and more are out of work.

The Democrats said they are waiting for the White House to put a new offer on the table: “We have again made clear to the Administration that we are willing to resume negotiations once they start to take this process seriously,” they said in a statement.

But Mnuchin shot back with his own statement, saying, “The Democrats have no interest in negotiating.”