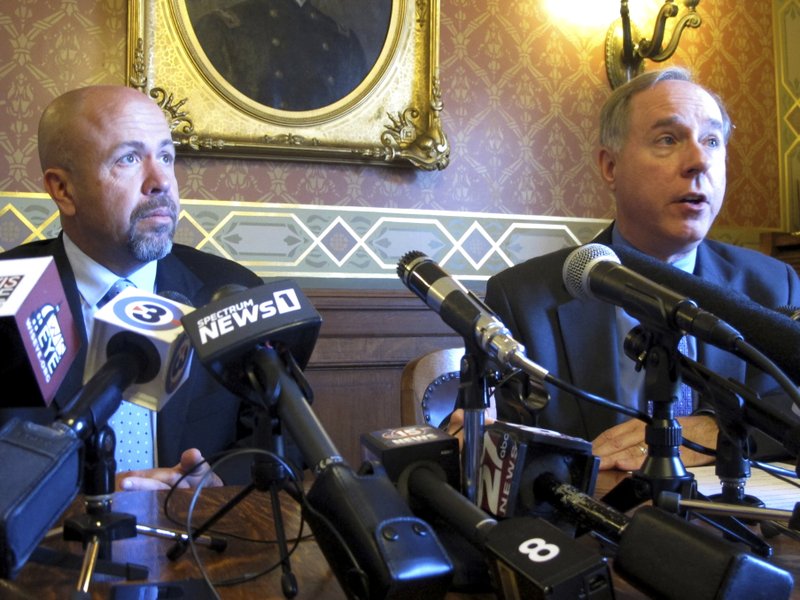 FILE - In this May 15, 2019 file photo, Wisconsin Republican Assembly Speaker Robin Vos, right, and Majority Leader Jim Steineke, left, speak in Madison, Wis. Wisconsin's Republican Assembly leaders are breaking with President Donald Trump over possibly delaying the Nov. 3, 2020 presidential election. Speaker Vos and Majority Leader Steineke tweeted Thursday, July 30, 2020, that they oppose delaying the election, a date that is enshrined in federal law and would require an act of Congress to change, including agreement from the Democratic-controlled House of Representatives. (AP Photo/Scott Bauer File)

MADISON, Wis. (AP) — Wisconsin’s Republican legislative leaders and the state’s longest-serving Republican in Congress broke with President Donald Trump on Thursday when he floated the idea of delaying the Nov. 3 presidential election.

Republican U.S. Rep. Jim Sensenbrenner, state Assembly Speaker Robin Vos, Assembly Majority Leader Jim Steineke and Senate Majority Leader Scott Fitzgerald all said separately that they opposed delaying the election, a date that is enshrined in federal law and would require an act of Congress to change, including agreement from the Democratic-controlled House of Representatives.

Steineke was direct in his tweet in reaction to Trump: “Hard NO.”

Vos referenced Wisconsin Republicans’ opposition to the call from Democrats earlier this year to delay the April presidential primary election because of the pandemic.

“We shouldn’t delay the November election either,” Vos tweeted. “Elections need to happen for democracy to function.”

Fitzgerald, a staunch Trump backer who is running for Congress, tweeted that he also opposed moving the election. Fitzgerald had sued Wisconsin’s Democratic Gov. Tony Evers to stop a delay in the state’s April election.

Evers supported disallowing in-person voting in the April election, replacing it with all mail-in voting that would have been counted into May. He opposes delaying the presidential election.

“Just bringing it up is breathtaking in and of itself,” Evers said.

Democratic U.S. Sen. Tammy Baldwin tweeted at Trump that “the election is not going to be delayed. The American people are going to vote and take back our Democracy to bring about the change they want and need.”

Democratic U.S. Rep. Mark Pocan, one of the most liberal members of Congress, called Trump a “fascist” in a tweet stating his opposition to an election delay.

“Only Congress can delay the election, and we won’t be doing it just so a fascist can preserve his power,” Pocan said.

Trump tweeted Thursday: “With Universal Mail-In Voting (not Absentee Voting, which is good), 2020 will be the most INACCURATE & FRAUDULENT Election in history. It will be a great embarrassment to the USA. Delay the Election until people can properly, securely and safely vote???”

Trump’s allegations that increased mail-in voting will result in fraud are unsubstantiated.

In Wisconsin, voters can mail in absentee ballots or cast them in person ahead of the election. As of Thursday, more than 813,000 people had requested absentee ballots for Wisconsin’s upcoming Aug. 11 statewide primary, which includes legislative and congressional races. That exceeds the 645,619 total votes cast in the 2016 primary.

Of those requested, about 290,000, or 36%, had been returned, according to the Wisconsin Elections Commission.