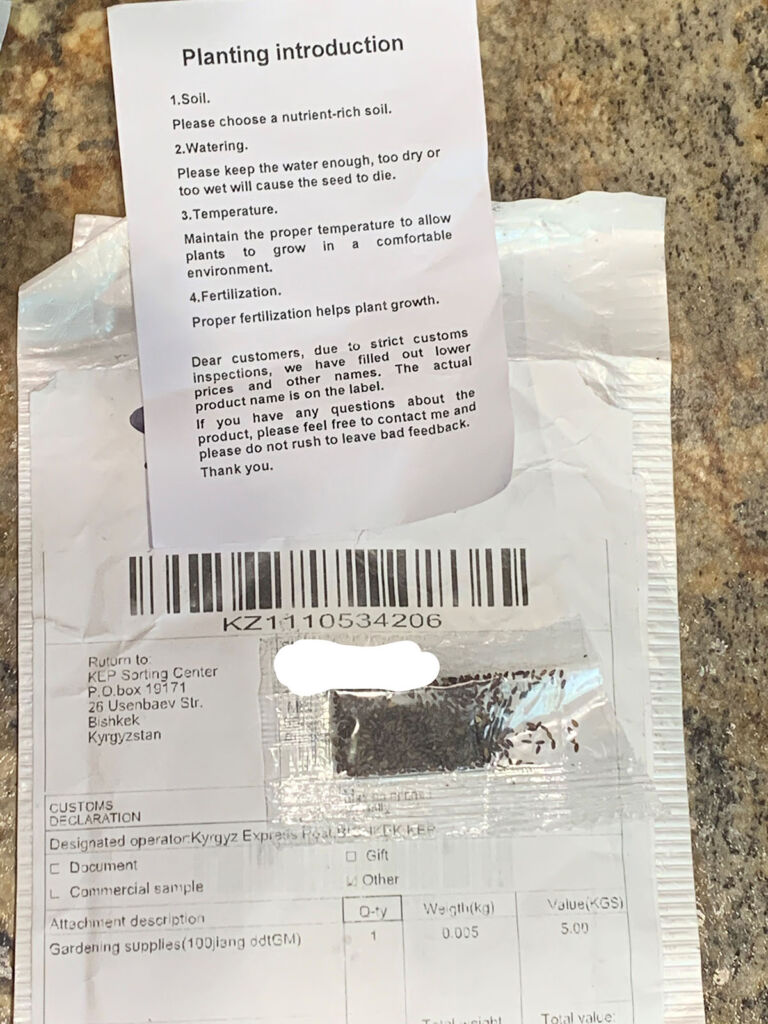 States across the nation are trying to discover the origin and contents of mystery seeds arriving as packages in the mail.

Although many reports said the seeds came from China, she saw several different countries labeled on various packages that were described as containing jewelry or other small items, not seeds.

Thiede said Tuesday the Minnesota Department of agriculture had more than 200 reports in the state of unsolicited seeds.

“The scale of this situation is what is really surprising,” she said. “There are two different scenarios that were hearing,” Thiede said. “One is that no one had placed an order for seed, and they just got the package unsolicited. The second story that we’re hearing is that the person placed an order for seed and never got the order fulfilled. Then weeks to months later, ended up getting this seed shipment, but obviously the seed was not identified in any way to show that it was the seed that they ordered.”

For instance, one person ordered tulip bulbs but received seeds instead. All foreign seeds shipped to the United States should have a phytosanitary certificate that means the seeds meet important requirements. Thiede said these seeds were not truthfully labeled in a way required by law. A key concern is that these unsolicited seeds could be invasive species, contain noxious weeds, introduce diseases to local plants, or be harmful to livestock.

Unfortunately, some people planted the seeds before realizing the possible impacts. Thiede said in most cases, the plants did not germinate.

“There are still risks there because seeds can live in the soil for a long time,” she said. “Even if they didn’t germinate now, they could potentially germinate at a later point in time.”

Anyone who did plant the seeds is asked to destroy anything that grew and try to remove the seeds. Thiede also recommended monitoring the area for a couple of years to make sure nothing unusual comes from the soil.

“We want to protect agriculture,” Thiede said. “We definitely don’t want this seed to get planted. We’ve learned this lesson many times, and painfully. You introduce something new that is not native and has novel characteristics that can allow the plant to become a difficult pest. We don’t want farmers having to deal with weeds that they can’t control. Likewise, we value our natural lands and all the wild places in Minnesota. We don’t want something that could possibly out-compete some of our important, native species.”

Customs, border patrol, and even post office inspectors have been able to identify some of the seed packaging based on photos released. Those officials have been working to intercept the packages as they come into the country.

The USDA and state departments of agriculture have been trying to identify the types of seeds, but there is a variety, and many have not received physical packages to more closely examine the contents yet. The Minnesota Department of Agriculture asks anyone who receives the seeds to not throw away the package or contents, not plant the seeds, and contact Arrest the Pest line at 1-888-545-6684 or email [email protected] with a name, contact information, and the date the package was received. Officials are coordinating shipping and package the contents to the MDA Seed Program.

County agriculture inspectors may be mobilized to help collect seeds and control the issue.