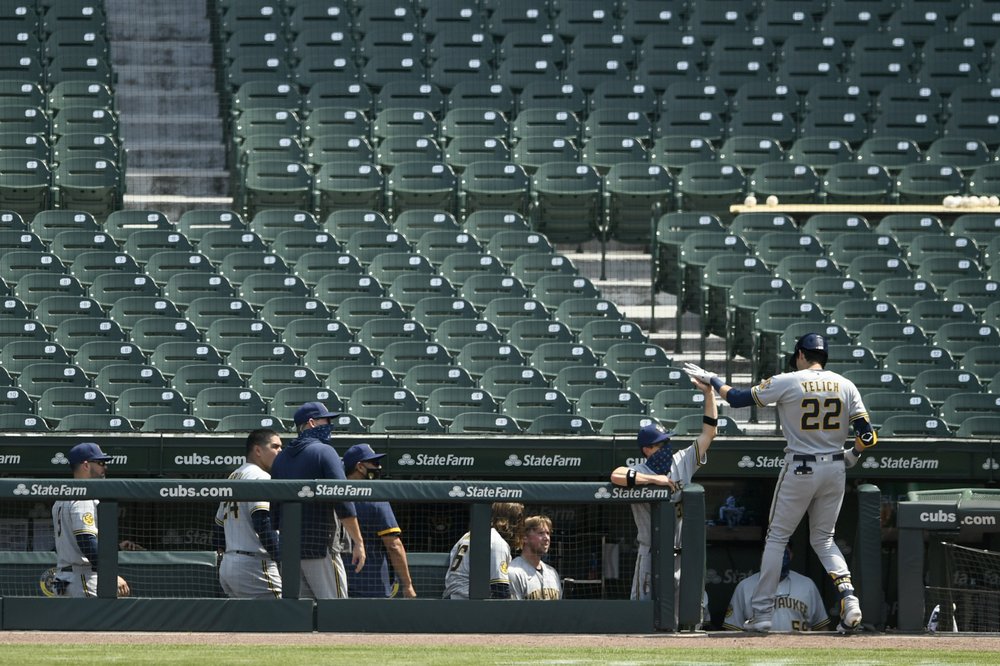 Milwaukee Brewers' Christian Yelich (22) celebrates with manager Craig Counsell at the dugout after hitting a two-run home run during the sixth inning of a baseball game against the Chicago Cubs, Saturday, July 25, 2020, in Chicago. (AP Photo/Paul Beaty)

CHICAGO (AP) — Christian Yelich and Justin Smoak hit long home runs, umpires intervened before a shouting match between the teams got too serious and the Milwaukee Brewers powered past the Chicago Cubs 8-3 on Saturday.

Without fans at Wrigley Field, players from both NL Central rivals could be heard shouting toward each other from their dugouts before the start of the fourth inning.

All-Star catcher Willson Contreras seemed to be barking the loudest from the warning track in front of the Cubs dugout, and several players from both sides popped out onto dirt near their benches. Umpires jumped in and calmed things down quickly before players could cross the foul lines.

“I think this is going to be part of this season,” Counsell said. “Both dugouts can hear each other and umpires can hear everything. There’s talking that goes on in game you never hear with all the fans here. It’s just part of the game.”

Brewers starter Corbin Burnes said the chirping, “was one of those things that kind of built up from the first pitch.”

“I think if you’re in the dugout now in this environment, you’re going to expect some of that,” Ross said. That’s going to spark some intensity. I don’t know how it all kind of started.”

Ditto for Kyle Schwarber, who hit a two-run homer deep to right. He’s says players are aware of COVID-19 protocols that limit physical contact and could lead to suspension.

“Today was just one of the cases where both teams were going back and forth,” Schwarber said. “It’s not a big deal. It’s just baseball.

“We’re going to have to be careful with the new rules and not be able to go into each other,” he said.

Cubs star Javier Baez was hit by a pitch in the first and Milwaukee’s Omar Narvaez was plunked in the fourth and the fifth.

A day after Kyle Hendricks shut them out on three hits, Milwaukee’s bats broke loose against Yu Darvish and the Cubs bullpen on a warm, breezy afternoon.

Smoak launched a towering solo shot off the right-field scoreboard in the fifth. Yelich drove a two-run blast high into Wrigley’s center-field batter’s eye in the sixth.

Ben Gamel hit a two-run triple for the Brewers.

“I thought all day our offense was really good,” Counsell said. “Against Darvish, we just made him work and continued to make him work.”

Contreras singled in a run for Chicago.

Burnes lasted 3 1/3 innings and tossed 75 pitches in his first start since April 2019 and only the fifth of his career. He allowed a run on two hits while striking out six.

Darvish (0-1) failed to follow up on a strong finish in 2019, allowing three runs on six hits in four innings.

BROTHERS BEHIND THE PLATE

Contreras saw his younger brother, William — also a catcher — make his major league debut with Atlanta on TV on Friday night. William, 22, entered as a defensive replacement for the Braves in the eighth inning against the Mets. “It’s more than special,” Willson Contreras said. “I think he can be better than me. He has great talent, great tools.”

Jason Kipnis, from suburban Northbrook, Illinois, made his Cubs debut starting at second base. The two-time All-Star with Cleveland signed a minor league contract with the Cubs in February, then was added to the major league roster on July 17.

Brewers: SS Luis Urias, who tested positive for coronavirus prior to summer camp, has been cleared to play. He reported to reporting to the Brewers’ secondary camp in Appleton, Wisconsin. Urias had been expected to compete with Orlando Arcia for the starting shortstop job after they acquired him from San Diego, but he underwent wrist surgery in the offseason and then had his COVID-19 setback.

Cubs: Both 3B Kris Bryant and 1B Anthony Rizzo were in the starting lineup for a second straight day, again batting in the leadoff an second spots, after dealing with back trouble in summer camp