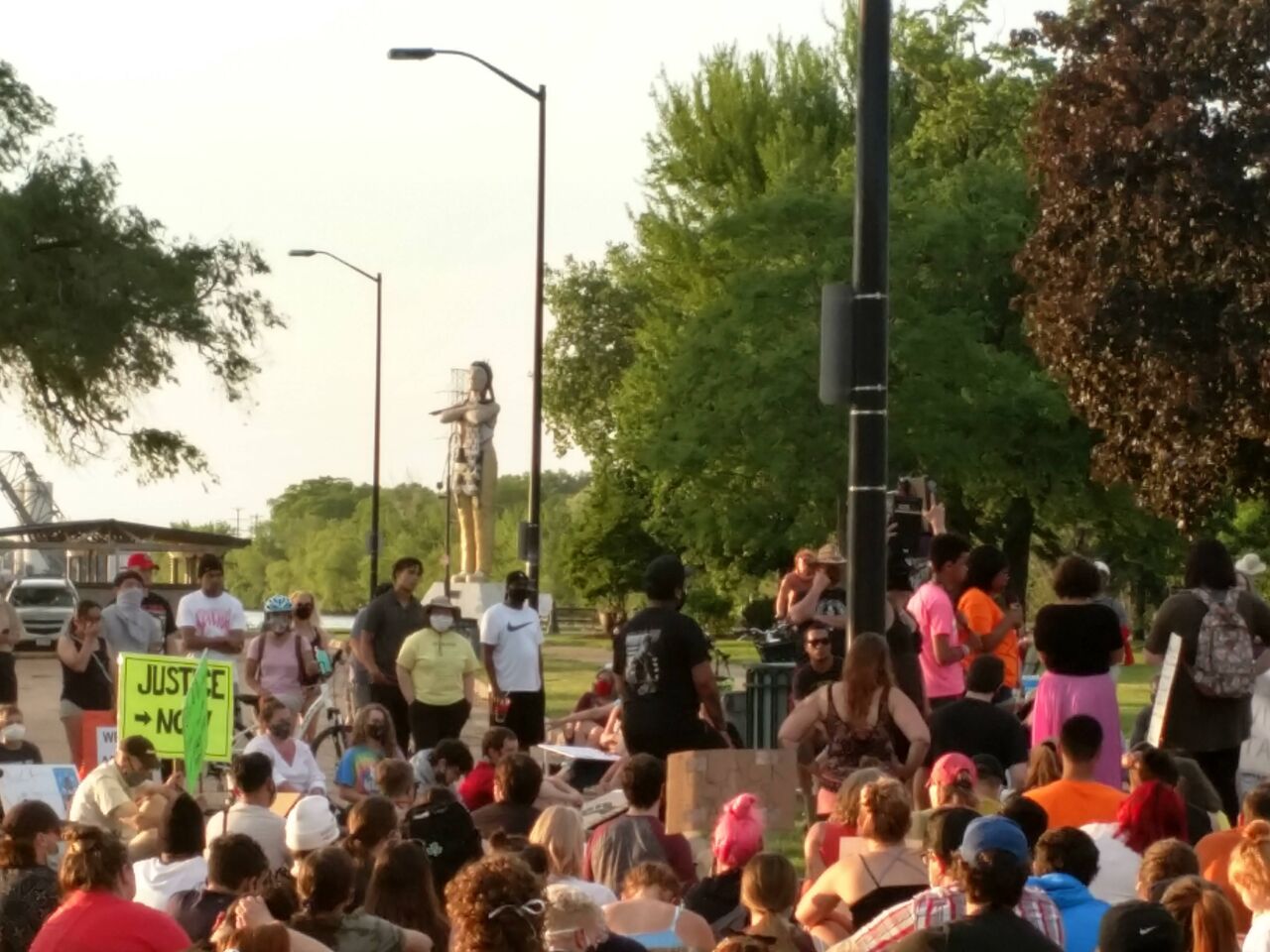 FILE - With the "Hiawatha" statue in background, protesters over the murder of George Floyd by Minneapolis Police gather at Riverside Park in La Crosse, Wis., on June 4, 2020. (PHOTO: Rick Solem)

The societal view of having a 25-foot Native American-looking statue in the middle of the most popular park in La Crosse.

The other is, quite simply, that the family wants it back and had requested that, at least two years ago.

Monday on La Crosse Talk PM, Kabat defended his decision to sending a letter to the Parks Board, requesting it vote on removing the statue from Riverside Park — which it did, unanimously, four days later on Thursday.

“At this point, because we are also part of a larger world that is looking at issues and symbols and histories, I feel that it’s time that La Crosse addresses it,” Kabat said.

For the most part, however, Kabat maintained on the show, in defense of some callers, that this was the decision of the artist’s family.

“We’ve been working with the family of the artist, to return the statue,” Kabat said, “because they had come to us, I don’t know, two and a half years ago or so, and had requested that the statue be returned to the family.”

But, over the past 58 years, the city hasn’t really held up its end of the deal, according to Kabat. Over the years, the condition of the statue has deteriorated.

“There were things pledged, at that time,” Kabat said, “that the Chamber of Commerce and, I think there were some other civic groups, that said that they were going to take care of the statue and make sure that it was maintained. And, of course that did not happen, so the city really is responsible for that.”

So, with changing times, and a deteriorating statue in disrepair from a city that either has to come up with funding to repair it or funding to give it back, Kabat chooses the latter. Not to mention, again, that Kabat says the family wants it back and the city can make amends as to its condition.

“That was part of our discussions with the family, from a couple years ago,” Kabat said, “is that, as a part of this whole effort, and really a compromise, that we agreed to taking the statue down and transporting it to their desired location.”

Asked again, however, of the timing, since the world is in the midst of a pandemic and the city of La Crosse is cutting budgets and funding everywhere, why not push removal back?

“At this point, that question really is moot,” Kabat said. “I felt it was time to address it now. I wrote a letter to the Park Board and the Park Board is taking action. So we’re moving forward with implementing what the board has adopted.

“I’ll leave that to the Monday morning quarterbacking, whether it should happen a year from now or 10 years from now. The decision has been made.”

Kabat said funds are there for removing it, and storing it. The city will have to store it. Another reason why the big lag in when talks began about the family requesting it back and the city not giving it back, is apparently because they don’t quite know where to put a 25-foot cement statue.