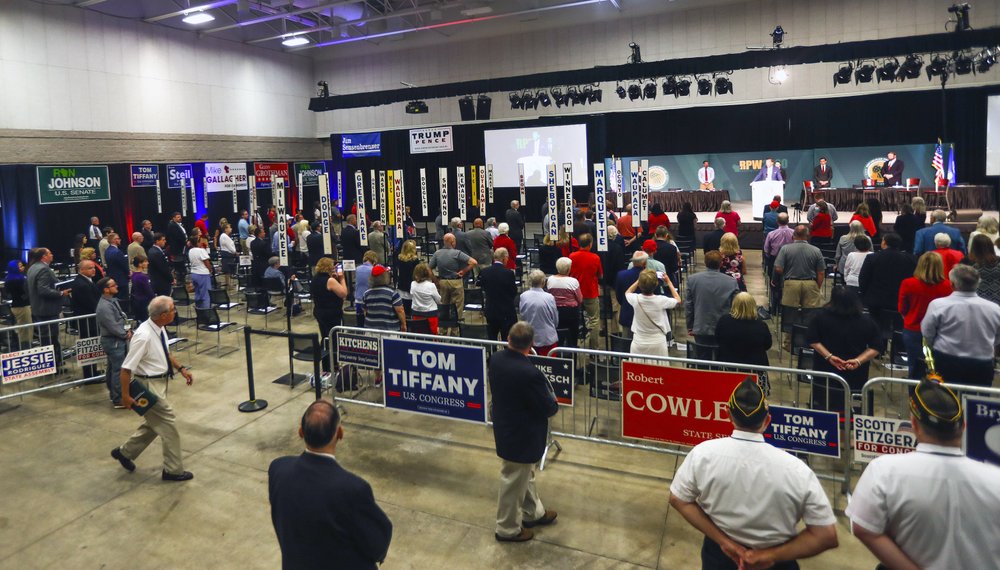 MADISON, Wis. (AP) — A pair of President Donald Trump’s top advisers touted him to Wisconsin Republicans on Saturday as a defender of law and order who will win over key Black voters, while casting presumed Democratic rival Joe Biden as out of touch and Biden’s party as a “mob” bent on erasing American history.

The strategists headlined the state Republican convention, which the party held in-person at a Green Bay convention center despite the risks posed by the coronavirus pandemic. The schedule was shortened, masks and hand sanitizer were made available, and guests had to accept risk and liability for their health in attending. Wisconsin set a record high in daily confirmed cases of COVID-19 on Saturday, breaking records set each of the two days leading up to the convention.

Mercedes Schlapp, a Trump adviser who is Cuban American, and Katrina Pierson, who is Black and worked on Trump’s 2016 campaign, are among the highest-profile senior female staffers working to help him get reelected. They participated in a women for Trump bus tour in Wisconsin leading up to them speaking at the convention.

Both women described Trump as a “law and order” president.

Speaking to a mostly white audience, Pierson said Republicans have the “moral authority to stand strong and fight back” and win over minority voters.

“And that is why the black voices for Trump coalition will be taking on Black Lives Matter,” she said. “Because we have the candidate who has the policies that prove Black lives matter because he believes that all lives matter.”

Schlapp said Trump will keep communities safe and stand by police. She contrasted him with Biden and Democrats, who Schlapp said “let the left mobs destroy our cities. … These Democrats want to rewrite our past, they want to erase history, that’s why they tear these statues down.”

Wisconsin Democratic Party spokesman Phil Shulman dismissed the comments as “delusional conspiracy theories and outright lies that will continue to put Wisconsinites and Americans everywhere at risk and cost Trump the presidency.”

Schulman said Republicans, by holding the convention in person, were “following Trump’s lead by ignoring the deadly crisis that is COVID-19 and don’t have the slightest understanding of the pain and suffering so many people across the badger state are experiencing because of this president’s gross incompetence.”

Schlapp cast Trump as a leader in the effort to fight COVID-19, even as Democrats mocked Republicans for holding their convention in person. Wisconsin Democrats switched to an all-virtual state convention, which they held in June.

Schlapp said Trump has worked with local, state and federal leaders to fight the coronavirus, while emphasizing the importance of reopening the economy, including schools in the fall.

Republican U.S. Rep. Mike Gallagher, of Green Bay, repeatedly blamed the coronavirus on China, saying it had “unleashed a pandemic on the world.”

In an awkward moment, U.S. Rep. Glenn Grothman, of Glenbeulah, got into a coughing fit when he tried to say Trump’s name at the start of his speech.

“It is a disaster for this country if he loses,” Grothman said.

Trump won Wisconsin by fewer than 23,000 votes in 2016 and it’s a key battleground state in this year’s election, as well. Polls have shown Biden with a lead, but the polls in 2016 also showed Democrat Hillary Clinton leading Trump at this point. Clinton never campaigned in Wisconsin after the primary, which Schlapp mentioned when wondering whether Biden would come.

“Even if he were in Wisconsin, he wouldn’t know,” she said.

Biden recorded a video message for the state Democratic convention and has also held virtual events targeting Wisconsin since the virus broke out. His surrogates have also been holding virtual events.

Pierson said that the Trump campaign had far more resources this time than in 2016, when it barely won the state.

“This time we have an entire Army locked and loaded,” she said.

Pierson also said not to be concerned about voter fraud, an issue that Trump and other Republicans have repeatedly raised as rationale for policies making it more difficult for people to vote. She said instead of worrying about fraud, Republicans should think about turning out a margin so large “that any fraud won’t matter.”