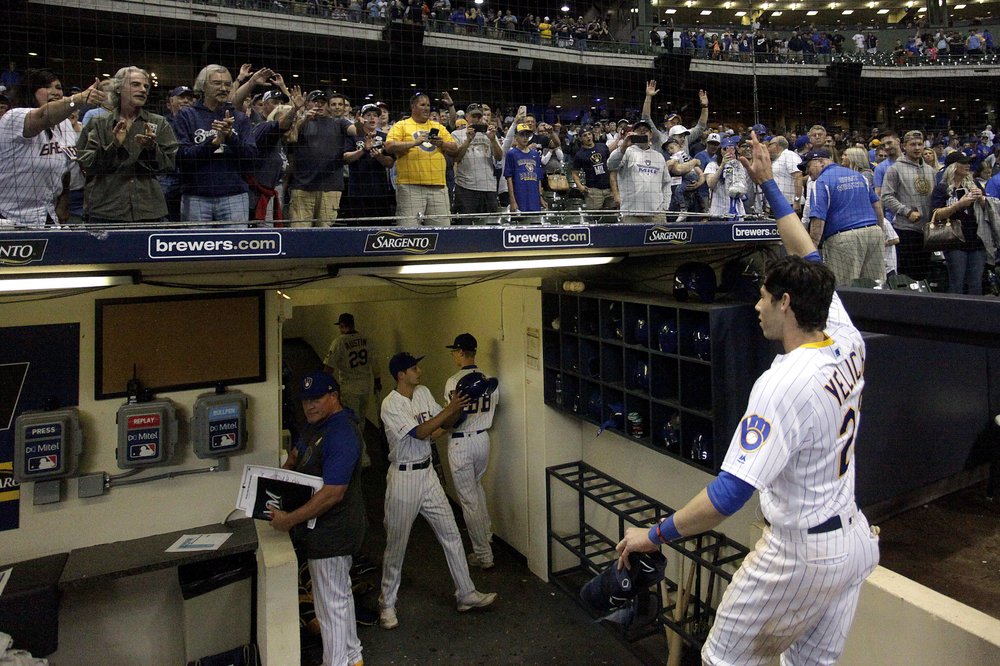 FILE - In this Sept. 7, 2019, file photo, fans cheer as Milwaukee Brewers' Christian Yelich walks off the field after driving in the winning run with a double during the ninth inning of the team's baseball game against the Chicago Cubs in Milwaukee. Major League Baseball will start each extra inning this season by putting a runner on second base. This rule has been used since 2018 in the minor leagues, where it created more action and settled games sooner. “I think it’s great,” Yelich said. “As a player, there’s nothing worse than extra innings." (AP Photo/Aaron Gash, File)

MILWAUKEE (AP) — Baseball has its answer to penalty kicks, overtimes and shootouts, and it figures to stir just as much debate as all those other tiebreakers.

Major League Baseball will start each extra inning in this abbreviated, 60-game season by putting a runner on second base. The rule has been used since 2018 in the minor leagues, where it created more action and settled games sooner.

Those words may cause traditionalists to shudder.

“I haven’t met anyone so far that likes it,” Washington Nationals manager Dave Martinez said.

“I think it’s great,” said Yelich, the Brewers outfielder and 2018 National League MVP. “As a player, there’s nothing worse than extra innings. Especially in a season like this, where you literally can’t take on that 15- or 16-inning game with just how rosters are constructed and pitchers not being built up to where they usually are and not really having the option to draw from this minor league talent pool.”

Indeed, MLB is experimenting with the rule this year in part to prevent marathon games from causing long-term damage to pitching staffs.

According to minor league data, 71% of extra-inning games ended after one or two more innings in 2016 and it was about the same in 2017 (74%). With the new rule in place, that number climbed to 93% each of the last two seasons.

Brewers general manager David Stearns, who backs the change, noted a game that lasts at least 15 innings “can impact you for weeks after that if they are compounded by other challenging games.”

“I think it makes sense in terms of trying to bring some finality to the game in this short season,” Chicago White Sox general manager Rick Hahn said. “And, frankly, in a year where we’re playing 60 games, why not try something different? Why not experiment a little bit?”

There will be experimentation in dugouts as baseball adjusts to the change.

Will road teams try to bunt that runner over to third or play for the big inning? How often will pitchers walk the leadoff batter to set up a double play? How frequently will teams pinch-run for the guy on second?

Thorman used to make sure he saved at least one or two relievers in case a game ended up lasting 14-plus innings. He said he doesn’t have to worry about that anymore because games rarely last that long.

Matt Erickson, who manages the Wisconsin Timber Rattlers of the Single-A Midwest League, said the cold weather had road teams often bunting and playing for one run early in the first season under the new rule.

“But as the summer went on, you find out you’re not really playing for a run as the visiting team,” Erickson said. “You’re pretty much playing for multiple runs if you’re on the road, trying to get a big inning.”

Williams believes road teams have an advantage because the runner on second scores so often, putting immediate pressure on the home team.

“As the season went on, I was talking to my coaches and I’d say that I wish you had a rule where if you’re the home team, you had the option of hitting first or pitching first (in extra innings),” Williams said.

The other side of it is that when a road team doesn’t score, the home team can win the game without another batter even reaching base safely.

Some players wonder if all these tactical decisions could defeat the purpose of the format change by lengthening time between pitches.

“I think you’ve all seen, with a runner on second base these days, we have to be pretty complicated with our sequences,” Minnesota Twins closer Taylor Rogers said. “I don’t see that speeding up the game. In fact, I see that slowing it down.”

That hasn’t been the case in the minors.

Skeptics of this format may need to get used to it even though MLB has indicated this is a one-year deal put in place because of this season’s unusual circumstances.

“I wouldn’t necessary say I support it or don’t moving forward,” New York Yankees manager Aaron Boone said. “In the short term, I’m OK with it. I do think there’s some tactical advantages to be taken advantage of there if you can be smart about it.”