McCain's campaign came mainly on a plane, 12 years ago 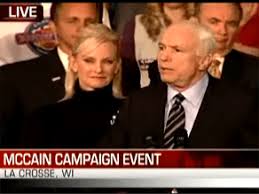 In October of 2008, Arizona Senator John McCain and his wife Cindy landed at the La Crosse airport, for a campaign rally roughly a month before the presidential election.  McCain’s opponent, Barack Obama, had spoken outside the La Crosse Center a week before.  The McCain event was inside the arena on a Friday morning, and in photos of the rally, you can also see former Governor Tommy Thompson and future Trump chief of staff Reince Priebus.  McCain commented on polls which showed him trailing Democrat Obama, saying he was going to “fool” the pundits who didn’t give him much of a chance of winning. Some McCain supporters said they didn’t believe the polls showing him trailing Obama, and people in the crowd booed when Obama’s name was mentioned. It would be McCain’s last campaign appearance in Wisconsin before the November election.

At another rally that same day in Lakeville, Minnesota, a woman in the audience claimed that Obama was an “Arab.”  McCain responded that the woman was wrong, and told his supporters that he admired and respected his Democratic opponent, calling Obama “a decent family man.”  The John McCain campaign came through the region in 2008, yesterday in La Crosse.