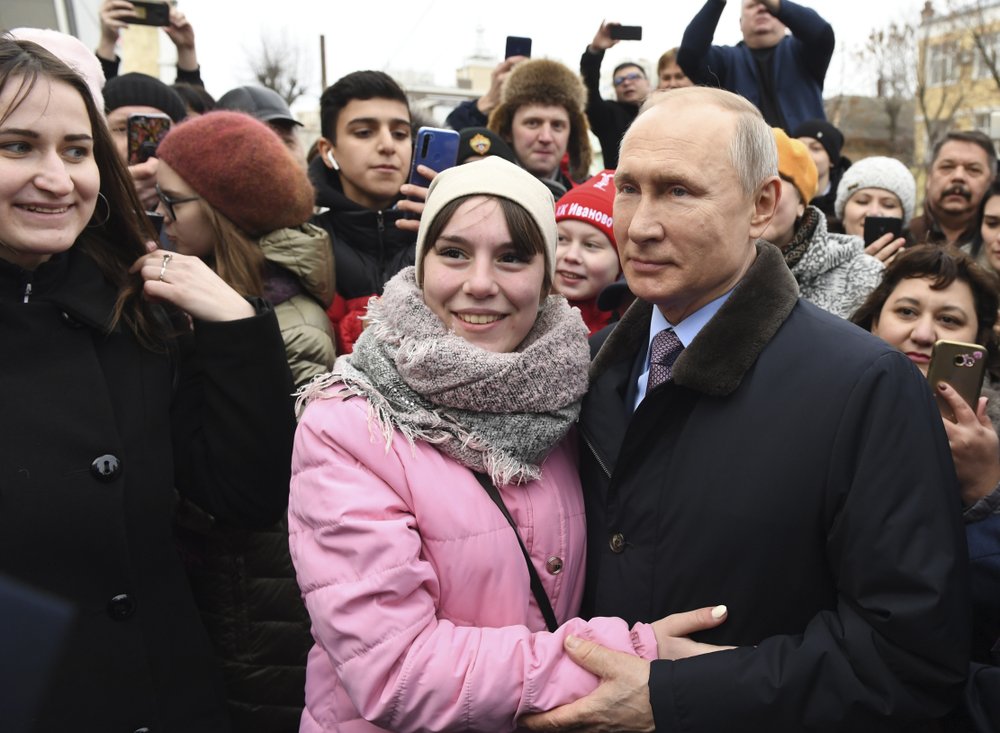 FILE - In this March 6, 2020, file photo, Russian President Vladimir Putin, right, poses for a photo with local citizens in Ivanovo, Russia. Putin is just a step away from bringing about the constitutional changes that would allow him to extend his rule until 2036. The vote that would reset the clock on Putin’s tenure in office and allow him to serve two more six-year terms is set to wrap up Wednesday, July 1, 2020. (Alexei Nikolsky/Sputnik, Kremlin Pool Photo via AP, File)

MOSCOW (AP) — Russian President Vladimir Putin’s main political project of the year — a constitutional vote that would allow him to extend his rule until 2036 — is set to wrap up Wednesday.

The nationwide balloting on the amendments that would reset the clock on Putin’s tenure and enable him to serve two more six-year terms enters its final day. For the first time in Russia, the polls were open for a week to help reduce crowds and to bolster turnout amid the coronavirus pandemic.

Putin is all but guaranteed to get the result he wants following a massive campaign to get Russia’s voters to say “yes” to the changes. Ironically, however, the plebiscite intended to consolidate his hold on power could end up eroding his position because of the unconventional methods used to boost participation and the dubious legal basis for the balloting.

“Putin lacks confidence in his inner circle and he’s worried about the future,” Pavlovsky said. “He wants an irrefutable proof of public support.”

The balloting completes a convoluted saga of concealment, deception and surprise that began in January when Putin first proposed the constitutional changes in a state-of-the-nation address. He offered to broaden the powers of parliament and redistribute authority among the branches of the Russian government, stoking speculation he might continue calling the shots as parliamentary speaker or as chairman of the State Council when his presidential term ends in 2024.

The amendments, which also emphasize the priority of Russian law over international norms, outlaw same-sex marriages and mention “a belief in God” as a core value, quickly sailed through the Kremlin-controlled parliament.

As speculation swirled about Putin’s future, the 67-year-old leader remained poker-faced until March 10. That’s when legislator Valentina Tereshkova, a Soviet-era cosmonaut who was the first woman in space in 1963, suddenly proposed a measure to let Putin run two more times. In a carefully choreographed show, Putin then arrived in parliament just before the decisive vote to endorse Tereshkova’s proposal.

The maneuver stunned Russian political elites who were busy guessing about Putin’s future and possible successors. Many saw the resetting of term limits as an attempt by Putin to avoid becoming a lame duck and to quell a power struggle in his inner circle.

The Russian president, who has been in power for more than two decades — longer than any other Kremlin leader since Soviet dictator Josef Stalin — said he would decide later whether to run again in 2024. He argued that resetting the term count was necessary to keep his lieutenants from “darting their eyes in search for possible successors instead of normal, rhythmical work.”

While Putin used his KGB-honed skills of deception to delude both the public and his own entourage, he complicated his constitutional plan by putting it to voters even though parliamentary approval was sufficient to make it law.

The move was intended to showcase his broad support and add a democratic veneer to the constitutional changes. But it backfired weeks later when the coronavirus pandemic engulfed Russia, forcing Putin to postpone the plebiscite originally scheduled for April 22.

The delay made Putin’s campaign blitz lose momentum and left his constitutional reform plan hanging as the damage from the virus mounted and public discontent grew. Plummeting incomes and rising unemployment during Russia’s outbreak have dented his approval ratings, which sank to 59% during Russia’s outbreak, the lowest level since his ascent to power, according to the Levada Center, Russia’s top independent pollster.

Amid the uncertainty, Putin rescheduled the vote immediately upon seeing the first signs of a slowdown in Russia’s infection rate even though the number of new confirmed cases reported daily remains high.

She noted that the vote comes shortly after the government’s lifting of coronavirus restrictions helped brighten the public mood.

Schulmann argued that the Kremlin’s focus isn’t so much on boosting overall turnout but rather on increasing attendance by the public sector workers who make up Putin’s base.

The authorities have mounted a sweeping effort to persuade teachers, doctors, workers at public sector enterprises and others who are paid by the state to cast ballots. Reports surfaced from many corners of the vast country that managers were coercing people to vote.

The Kremlin also has used other tactics to increase turnout and support for the amendments.

Prizes ranging from gift certificates to cars and apartments were offered as an encouragement, giant billboards went up across Russia and celebrities posted ads for the “yes” vote on social media.

At the same time, monitoring the vote became more challenging due to hygiene requirements and more arcane rules for election observers. Kremlin critics argued that these would increase opportunities for vote fraud.

Russia’s weakened and fragmented opposition split into two camps over the amendments: those who called for a boycott of the vote, like the most visible Kremlin foe, Alexei Navalny, and those who advocated voting against the constitutional changes.

Most observers expect the Kremlin to get its way, regardless of the opposition’s strategies.

“People are angry at the government, but they still don’t have any alternative to Putin,” Pavlovsky said.

He noted, however, that the unusual methods used by authorities to boost turnout and get the result Putin wants would undermine the legitimacy of the vote.

“The procedure has been distorted and simplified to the point when it would be difficult to trust the figures,” Pavlovsky said.

Schulmann also warned that the balloting will likely fail to serve its designated purpose of cementing Putin’s rule as the economic pain from the coronavirus deepens.

“I think the vote will not be perceived as the legitimizing one,” she said.