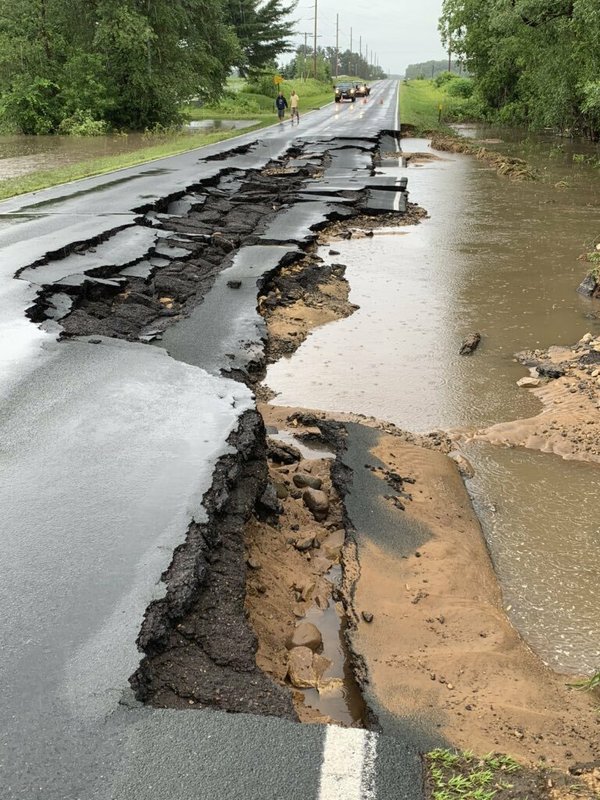 County Highway JJ is washed out by the Kinnickinnic River east of River Falls, Wis., Monday, June 29, 2020. Flash flooding made some roads impassable and forced some residents to evacuate their home in western Wisconsin where up to 6 inches of rain fell by Monday. (Andrew Krueger/Minnesota Public Radio via AP)

BALDWIN, Wis. (AP) — A 70-year-old man died Monday after his minivan went off the road and became submerged in a ditch as a western Wisconsin village grappled with hours of torrential rain that resulted in home evacuations and heavy floodwaters.

Gary Parent of Emerald, Wisconsin, was driving a Dodge Grand Caravan around 5:15 a.m. Monday when he drove into floodwaters that were sweeping across the road. He lost control and landed in the ditch, where the van became covered by water. Parent was rescued but later pronounced dead, the St. Croix Sheriff’s Office said.

The storms swept through the southern Minneapolis and St. Paul metro area before deluging western Wisconsin late Sunday and Monday, where eight families in the St. Croix County village of Baldwin were evacuated from houses near a creek to a community center, sheriff’s Capt. Jeff Klatt told the Star Tribune.

At least five motorists were rescued from the roofs of their flooded vehicles on Highway 63 in the Baldwin area, Klatt said.

Stretches of that highway and many other roads and bridges were made impassable, the St. Croix County Sheriff’s Office said.

“We urge everyone to use extreme caution if you have to travel,” the sheriff’s office said. “Be very cautious of submerged roadways in low lying areas and blind corners.”

In nearby Pierce County village of Ellsworth, officials said the rain overwhelmed many culverts and caused localized flooding, including along parts of Highway 10.

Highway 29 near Spring Valley was also closed, according to the Wisconsin Department of Transportation.

“These roads are impassable for the time being,” police tweeted.

The water began to recede by mid-morning Monday and there were no reports of serious injuries.

In Minnesota, heavy rain caused mudslides on Highway 169 south of St. Peter and on Highway 68 near Courtland, just east of New Ulm, the Minnesota Department of Transportation said.