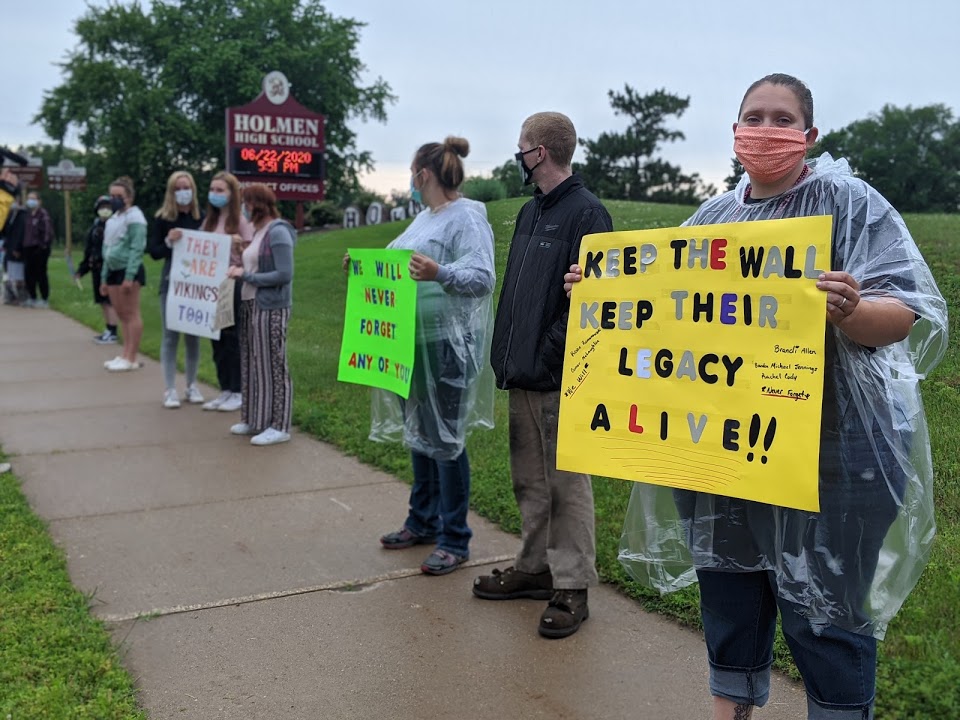 A temporary sigh of relief for families of loved ones lost in Holmen, the school district decided to create a committee to review the decision to remove the school’s memorial wall.

It all started with a letter. Linda Murray-Stollenwerk was one of many parents who was asked by the Holmen School District to pick up the memorial hanging on the wall in her daughter Mia’s memory. Mia was diagnosed with juvenile Huntington’s Disease and passed away before graduating.

The letter signed by District Administrator Dr. Kristen Mueller explained the memorial wall was to be torn down as part of the school’s renovation, and it would not be replaced. Mueller said the focus of the district is to support learning, and memorials can be an ongoing reminder of a traumatic event. In a follow-up letter, she added the wall was not a complete representation of all lives lost at Holmen and that living memorials such as scholarships or run/walks may be fitting ways to honor a memory.

Stollenwerk shared her letter on Facebook, where it was shared hundreds of times. Eventually, an online petition formed to keep some form of a memory wall in the school. Stollenwerk reached out to the school board and asked to be placed on the June 22 meeting agenda.

Wearing face masks, standing feet apart, and holding signs in honor of those passed, members of the Holmen community gathered outside the high school before the school board meeting. The protest was organized by incoming Holmen senior Aidan Hutfless.

“There are many families who are deeply hurt by the School District of Holmen’s decision to remove that student memorial wall,” Hutfless said. “Students are very outraged by that decision as well. I just think it’d be a good thing to get our voices out and show us show them that we care.”

Hutfless asked all who were joining the protest to wear face masks and personally purchased masks to pass out to those who did not have any. He disagreed with the district’s statement that the memorial wall was traumatizing for students. Rather, he believed it too reflected a valuable life lesson.

“I think it serves as a reminder that sometimes life happens,” Hutfless said. “It needs to stay up because it’s a reminder, and they need to be honored. I just hope that people realize students care and that we’re doing this for the family’s and the fellow students on that wall.”

She shared how the school stepped forward to help her daughter before the disease took her life at age 15. Faculty were at the hospital on the day of her diagnosis to offer support.

“After we were told Mia did have this disease and we might have two to five years with her, we were told we were in the best possible district for Mia, and I believed that 100 percent,” Stollenwerk said.

The transportation department helped arrange her rides. Nutrition services made special meals for Mia. Stollenwerk said the administration welcomed her coming into classrooms to educate staff and students on Mia’s disease.

“It was a priority that Mia stayed in school as long as she could because she always wanted to be in school,” her mother remembered. “She loved to read. She loved art. She loved to sing in the choir front row, pink wheelchair and all. She loved her friends.”

Stollenwerk could not believe this same district would send a letter asking to remove her daughter’s memory from the school.

School Board Treasurer Gary Dunlap added his voice in support of Stollenwerk and other community members.

“This is probably the worst, misguided, and uninformed decision this school district has ever made in my opinion,” Dunlap said. “The reasoning behind it is it falls short. It was a terrible decision, and I’m embarrassed for the school district to have this decision been made in the first place. I hope we can make it right.”

“At that time, we discovered the district did not have a policy or consistent practice or procedure for memorials,” Mueller said. “We did learn there were a number of ways that families have remembered a loved one including planting trees, memorial benches, a memorial garden, memorial rocks, plaques, time capsules, and the memorial wall in the high school. We continue to learn of other memorials throughout the district.”

As construction approached, the district used the response and recovery section of the comprehensive school safety plan to guide the recent decision to remove the wall. She said they sent letters to families would not hear about the wall coming down second-hand.

“We recognize the approach to informing these families could have been done more sensitively,” Mueller said. “Therefore, we reached out to have conversations with the families to listen. We also had individuals read out to us to share their thoughts. The information shared will help guide us as we move forward towards policy development and future decisions.”

At that point, Mueller announced they would establish a board committee to create a consistent way to memorialize those lost in the district. The committee would consist of stakeholders and board members.