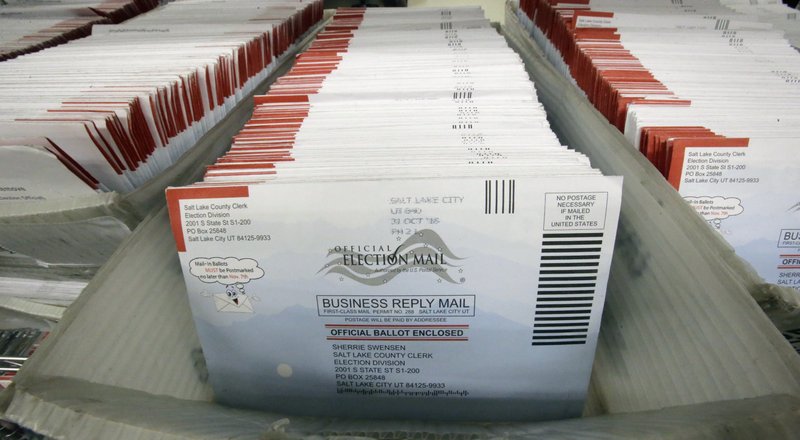 MADISON, Wis. (AP) — A conservative law firm asked the Wisconsin Elections Commission on Monday to outlaw in the state the process by which outside groups, typically partisan, help to send or return large numbers of absentee ballots.

The move by the Wisconsin Institute for Law and Liberty to ban ballot harvesting in the battleground state is a precursor to a possible lawsuit in an ongoing fight over the push to increase mail-in voting during the coronavirus pandemic. Both major parties are preparing for a monthslong, state-by-state legal fight over how citizens can safely cast their ballots should the coronavirus pandemic persist through November’s election.

High absentee voting is expected again in November, putting the spotlight on the practice of ballot harvesting. Wisconsin law does not specifically outlaw the practice. The Wisconsin Institute for Law and Liberty, on behalf of five registered voters, argues that it believes state law does not allow it but could be interpreted to permit it. The law firm is asking the Wisconsin Elections Commission to enact a rule to enforce the firm’s interpretation of the law.

Wisconsin law requires photo ID for citizens to obtain an absentee ballot. A witness must sign the ballot. However, the law does not prevent third party groups from collecting and returning the ballots en mass.

The commission staff said last year that it was not aware of any efforts in Wisconsin by a political campaign or organization to systematically collect absentee ballots. However, the commission did ask the Legislature in March 2019 to clarify the law relative to ballot harvesting. The Legislature did not do that.

The request filed Monday is for the commission to clarify that only the voter may request an absentee ballot and that person then must place the ballot in the mail or return it in person, meaning a third party group could not do it for the voter.

Commission spokesman Reid Magney had no immediate comment on the request.

Twenty-seven states allow voters to designate someone else to return their ballot, according to the National Conference of State Legislatures. Wisconsin is one of 13 states that is silent on the issue, according to NCSL.

Rick Esenberg, president of the law firm that is also seeking to purge about 130,000 registrations of voters who have moved, said that Wisconsin’s law is not as clear as it should be, making clarification by the commission important.

“This type of thing is ripe with the potential for abuse,” Esenberg said Monday on WISN-AM. “It’s not an unreasonable expectation, and it’s one I think is important to ensure, not only that our elections are conducted fairly, but we have confidence they are conducted fairly.”

Esenberg said stopping ballot harvesting is not a partisan issue. He noted a North Carolina congressional election in 2018 that was overturned due to ballot harvesting by Republicans. Both parties harvest ballots in states that permit it.