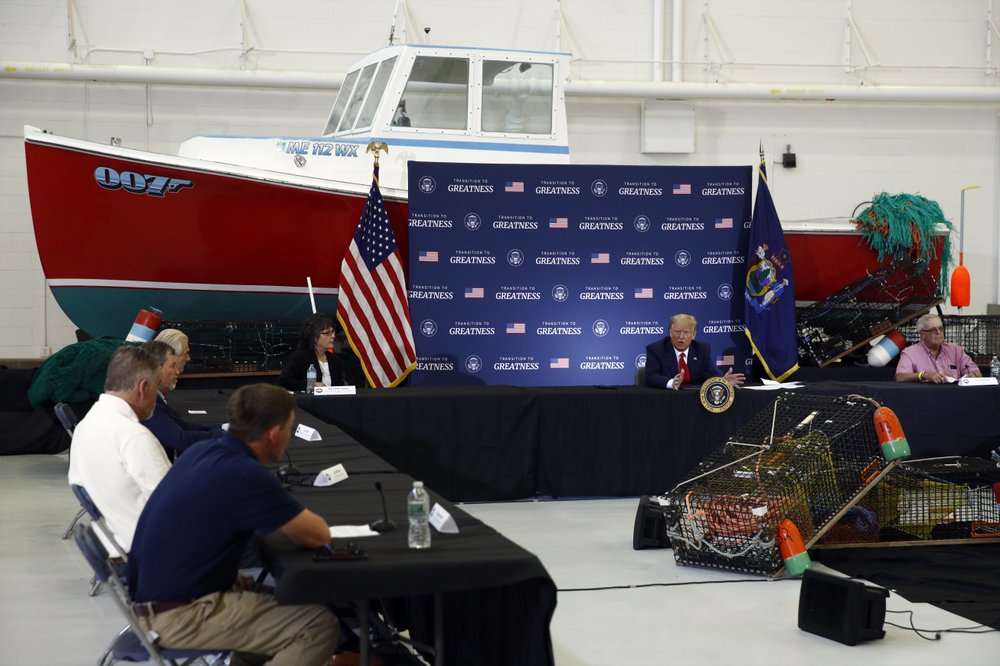 BANGOR, Maine (AP) — President Donald Trump rolled back protections Friday at a marine conservation area off the New England coast, signing an order to allow commercial fishing in a stretch of water environmentalists say is critical for endangered right whales and other fragile marine life.

“We are reopening the Northeast Canyons to commercial fishing,” Trump told a roundtable meeting with fishing industry representatives and Maine officials. “We’re opening it today.”

The Northeast Canyons and Seamounts Marine National Monument off the New England coast, created by former President Barack Obama, was the first national marine monument in the Atlantic Ocean, and one of just five marine monuments nationwide.

ADVERTISEMENT
The conservation area comprises 5,000 square miles (8,000 square kilometers) east of Cape Cod, which contains vulnerable species of marine, such as fragile deep sea corals and endangered right whales, which number only about 400. The whales are susceptible to ship strikes and entanglements in fishing gear.

It’s also a place fishermen have long harvested lobsters and crabs, and its creation drew the ire of commercial fishing groups, some of whom sued.

“We want conservation and good environmental practices — that’s very important — but we also want something that’s fair to you,” he told the fishermen.

Environmental groups vowed to push back against the president’s actions.

Trump’s decision will devastate protections for the underwater world along that stretch of New England, and threatens the end for right whales and other endangered marine animals, said Kristen Monsell, a senior attorney for the Center for Biological Diversity environmental group.

“Gutting these safeguards attacks the very idea of marine monuments,” she said.

The action comes a day after the equally sweeping rollback and proposed rollback of public health and environment protections by the Trump administration. On Thursday, Trump signed an executive order directing agencies to look for ways to override environmental laws to push big projects like highways and pipelines to completion.

And the Environmental Protection Agency proposed changing the rules for crafting air pollution limits under the Clean Air Act, in a way critics say will make it harder to move against dangerous pollutants in the future.

ADVERTISEMENT
Trump has made a priority of annulling or weakening public health and environmental regulations — especially ones enacted under Obama — that he sees as overly burdening business.

Conservative groups and lawmakers have urged him to keep up the pace as his first term draws to a close. On Friday, however, Maine Republican Sen. Susan Collins said Trump should be tackling bigger problems for the state’s fishing businesses rather than “reopening the debate” on the marine national monument.

Janet Mills, Maine’s Democratic governor, dismissed the president’s actions, saying it’s “not going to help the vast majority of Maine fishermen feed their families. It will not support an industry that is struggling under the massive weight of an unprecedented pandemic and misguided federal policies.”

Rolling back protections for the marine monument “is part of the Trump administration’s continued assault on environmental protections,” Elizabeth Turnbull Henry, president of the Environmental League of Massachusetts.

The Northeast Canyons and Seamounts National Marine Monument has already withstood a legal challenge by fishermen who opposed its creation. A federal judge dismissed the lawsuit challenging its creation in 2018, and the Court of Appeals for the District of Columbia Circuit upheld the decision in December.

The Trump administration has reviewed a number of national monument designations used by Obama to protect land and water. One of them, Katahdin Woods and Waters National Monument, is in Maine.

The Antiquities Act of 1906 lets presidents establish national monuments but doesn’t give them power to undo such a designation. Nonetheless, Trump has downsized two national monuments Utah and allowed energy development on some of the land.