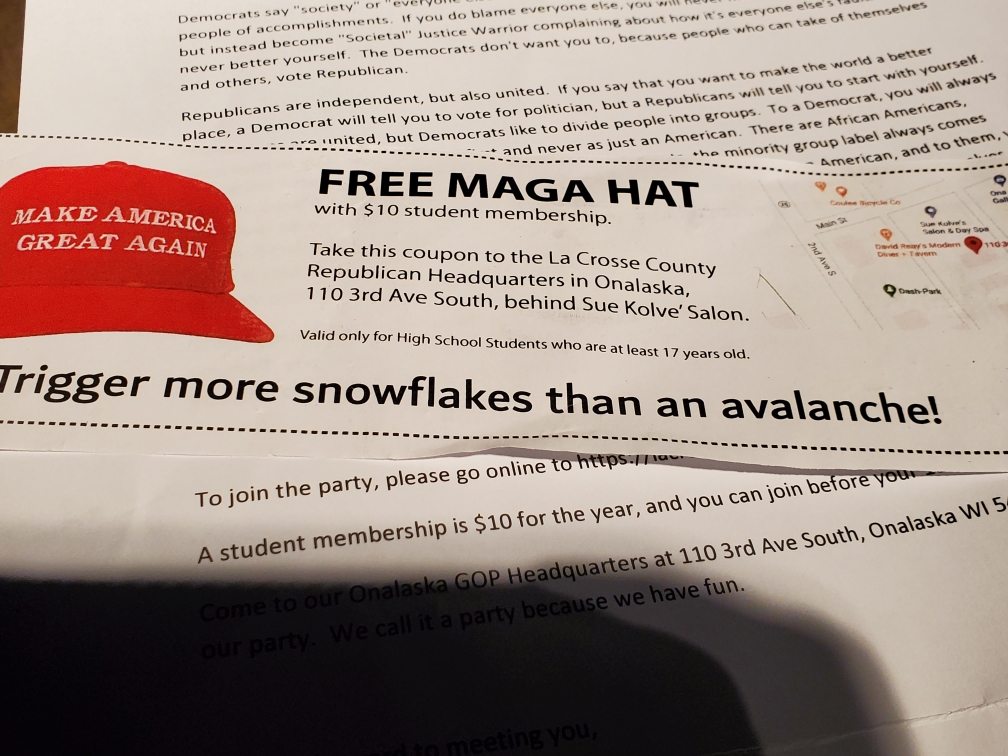 A strange thing some La Crosse area high school seniors got in the mail.

But it gets stranger than that. It was a recruitment letter to join a political party, now that they’re entering adulthood.

Because, as we all know, the best way to get through to a 17-year-old is to send them a letter in the mail.

And, of course, it wasn’t to join just any ole’ political party. It was to join The Republican Party — signed off by the La Crosse County Executive Committee.

It is filled with “history” — which, as we also know, every 17-year-old loves — bullet points and rankings. It talks of race, sexual preference, white privilege.

And, at the bottom, a coupon for a free MAGA hat with the $10 membership. So, it really isn’t free. And, did the sender believe a high school student had a printer to print the letter and cut out this coupon?

Oh, and, of course, the letter was fake.

“We didn’t send that letter out,” La Crosse County Republican Party Chair Bill Feehan said Wednesday on La Crosse Talk PM. “We don’t support what’s said in that letter. We find it offensive. It feels like a gut punch. This is the kind of dirty trick stuff in politics that makes people not want to be involved.”

“You’ve got a lot of trolls out there, and they’re not really interested in saying anything constructive,” Feehan said. “I guess I’m just going to, kind of chalk this up to the trolls.”

Feehan, however, then escalated the letter from comment troll.

“The thing I want to make clear, in this letter, there’s a lot of bizarre statements,” Feehan said. “It’s almost like the Unabomber Manifesto.”

As the letter denounces Democrats on seemingly every front, Feehan waned to make clear that the Republican Party is welcome to everybody. Feehan also put out a statement on the Party’s Facebook page here.

“We find the letter repugnant,” he said, “and it does not represent the views of our county party.”

Asked if he thought they might get the law involved, Feehan wasn’t optimistic.

“I’ve been doing this for a long time,” he said. “History’s taught me that these things usually don’t go anywhere.”