States give few details on billions spent on virus supplies 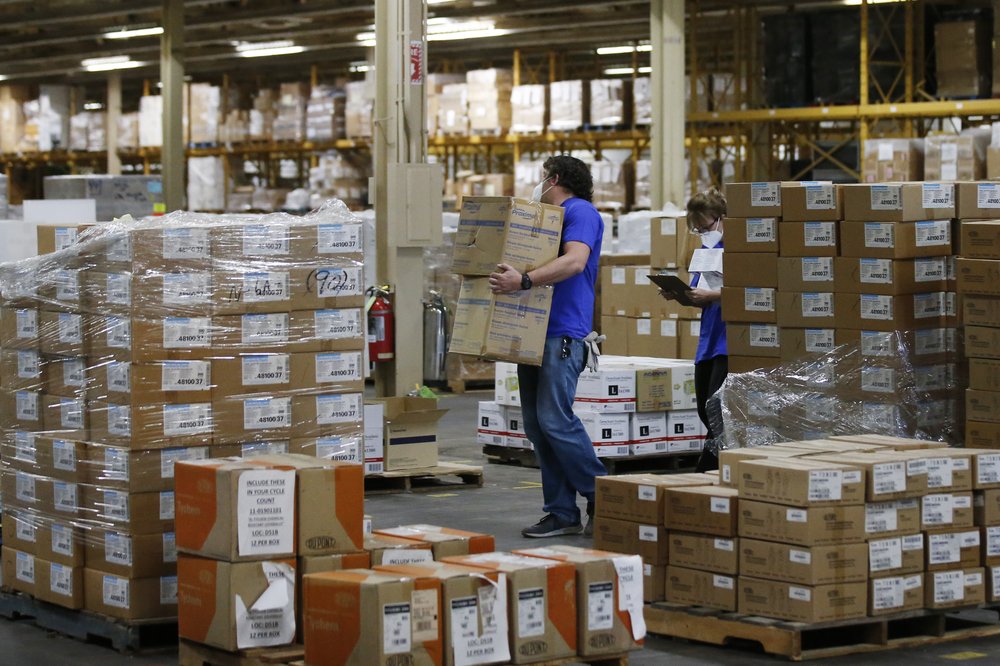 FILE - In this April 7, 2020, file photo, workers carry boxes at Oklahoma's Strategic National Stockpile warehouse in Oklahoma City, in Oklahoma City. States are spending billions of dollars stocking up on medical supplies like masks and breathing machines during the coronavirus pandemic. An Associated Press survey of all 50 states found a hodgepodge of public information about the purchase of masks, gloves, gowns and other hard-to-get equipment for medical and emergency workers. (AP Photo/Sue Ogrocki, File)

JEFFERSON CITY, Mo. (AP) — States are spending billions of dollars stocking up on medical supplies such as masks and breathing machines during the coronavirus pandemic. But more than two months into the buying binge, many aren’t sharing details about how much they’re spending, what they’re getting for their money or which companies they’re paying.

An Associated Press survey of all 50 states found a hodgepodge of public information about the purchase of masks, gloves, gowns and other hard-to-get equipment for medical and emergency workers.

Illinois has one of the most detailed tracking websites, showing the date, vendor, purpose, quantity and price of each purchase. In most states, it’s not that easy. Some provided similar information only after the AP pointed to laws requiring the release of government documents.

The public can see only a piece of the procurement puzzle in many states — maybe an estimate of the total spent on supplies, but not the names of the providers or the price of each item, which could show whether the state got a good deal or was ripped off.

Those details are important because many states set aside purchasing safeguards amid a scramble for supplies among health care providers, states, the U.S. government and other countries. Instead of seeking competitive bids and vetting them for months, states have closed emergency deals in days with businesses claiming to have access to supplies. In some cases, states have prepaid to ensure orders aren’t diverted elsewhere.

Some states say technological barriers prevent them from posting more information. Others provided no explanation for why they aren’t doing so.

Transparency advocates say they’re troubled by the difficulty in getting details about government spending, especially during a crisis that’s shaken the economy and sickened about 1.6 million in the U.S.

After an AP request in late April and early May, 44 states provided figures showing they had ordered or spent more than $6 billion collectively on protective equipment and ventilators. The actual costs likely are higher, because some numbers were several weeks old and some reported only what they had spent so far, not what was in orders still to be delivered.

The AP hasn’t received figures from Florida, Indiana, Massachusetts, Nevada, New Jersey and Texas. Some provided no specific timeline for releasing the information.

States should prioritize requests for public records that relate to the coronavirus, said Anna Diakun, an attorney at the Knight First Amendment Institute at Columbia University.

“As this crisis is unfolding, the value of that information is less after the government response has concluded,” Diakun said. “There is still time to make course corrections, but only if the public knows they need to be taken.”

Several states have made changes already. Missouri canceled orders worth $34 million for over 9 million masks made in China after tests showed they didn’t fit properly. A Chinese company refunded California $247 million after missing a deadline for the U.S. to certify its N95 masks were safe and effective.

The AP’s survey shows other states have yet to get their supplies. North Carolina placed orders for $253 million in protective equipment but had received just $21 million of it as of early May. Emergency managers say they’re starting to cancel orders that probably won’t be delivered.

Colorado said it ordered over $58 million in protective equipment but has paid just $44,000 so far because it hasn’t received most of the supplies. The state has declined to identify its vendors in case they “fall victim to fraud or customs delays” and can’t deliver the goods, the health department said.

By contrast, Illinois Comptroller Susana Mendoza has created a website tracking coronavirus-related spending. It shows what was purchased, from what business, on what date, in what amount and at what cost.

“Transparency, to me, is like a pathway to rebuilding trust in government,” Mendoza said.

The website, for example, shows that the state paid nearly $11.8 million to Steven MacGeachy on May 6 for 2.4 million N95 masks.

MacGeachy, who does business as The Rare Group LLC in suburban Chicago, declined to tell the AP where he got the masks. He said he specializes in accessing global government institutions and wealthy people.

“I got involved in this particular instance in an effort to make sure that the state of which I live in was able to procure good product at fair pricing,” MacGeachy said.

“Normally, we wouldn’t be able to do that, nor would we ever even entertain the thought,” Mendoza said. But “we kind of had a gun to our head — we didn’t have the leverage to negotiate the best deals.”

Though not posted online, officials in Georgia, Iowa, Kansas and Louisiana provided the AP with detailed lists showing how much they paid each vendor and how many supplies they got.

Other states are posting only certain information.

Minnesota publishes a biweekly online COVID-19 report detailing the prices and quantities purchased, but not the vendors. Washington state posts a list of vendors it uses to buy protective equipment, but not the amounts paid or ordered from each.

Missouri Treasurer Scott Fitzpatrick launched a website showing how the state is using federal coronavirus aid. Because that money can reimburse state purchases, the site is gradually including some of the $42 million spent on protective equipment. It shows the amount paid to each vendor but only for general categories like “medical and dental supplies.”

“In a perfect world, I’d love to be able to put a check and a copy of every invoice up so people could see what it was,” he said. “But that’s not a realistic thing for us right now. That would be a massive amount of document scanning and uploading and cataloging.”

Ohio also said computer programming complications kept it from releasing more information. Three agencies have committed more than $109 million for personal protective equipment, but “a comprehensive number would be very difficult to ascertain because there is no single code in the State accounting system to identify PPE,” Bill Teets, a spokesman for the Department of Administrative Services, said in an email.

“It’s 2020,” he said. “There should be no difficulty in making this information available online.”