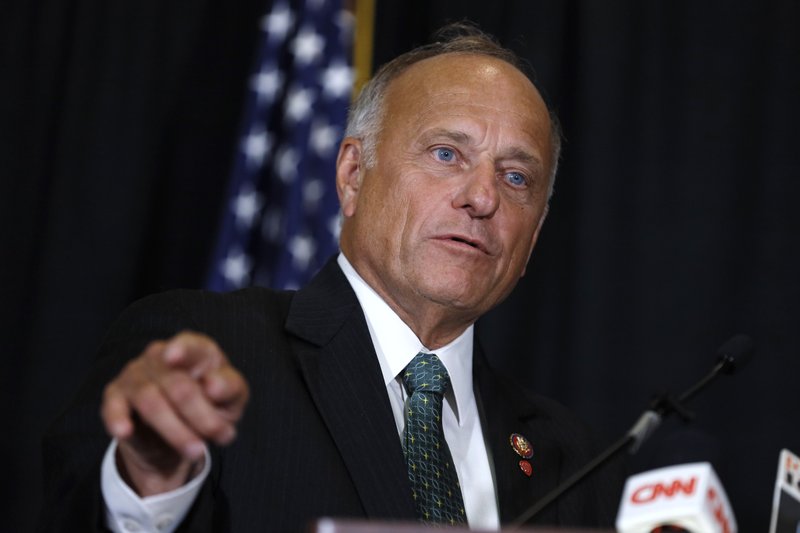 FILE - In this Aug. 23, 2019, file photo, Rep. Steve King, R-Iowa, speaks during a news conference in Des Moines, Iowa. King is on the outs with a significant bloc of his long-reliable conservative base, but not for almost two decades of incendiary utterances about abortion, immigrants and Islam. (AP Photo/Charlie Neibergall, File)

DES MOINES, Iowa (AP) — Rep. Steve King is fighting for his political life — but not because he’s compared immigrants crossing the border illegally to cattle. His Republican opponents in next week’s primary aren’t raking him over the coals for making light of rape and incest. His chief rival’s ads don’t mention the time King wondered when the term “white supremacist” became offensive.

Instead, the nine-term congressman known for his nativist politics is fighting to prove he can still deliver for Iowa’s 4th Congressional District. Since Republican leaders stripped him of his committee assignments, in a rare punishment, King has been dogged by questions over whether he’s lost all effectiveness. Some longtime supporters are turning away, not because of his incendiary remarks but because they think he can no longer do the job.

“We all want to feel that we’re being represented in Washington, D.C., that we have a voice,” said Iowa state Sen. Annette Sweeney, a former King supporter.

Establishment Republicans in Iowa and Washington, some of whom share King’s policy views and have long tolerated his provocative remarks, have largely abandoned the congressman, throwing their weight behind Randy Feenstra, a conservative state senator.

That sets up the June 2 primary, a five-way fight in a GOP-heavy district, as a test of whether the establishment can effectively police the party and distance itself from racist and far-right voices who critics say have been amplified in recent years.

But Republican activists in King’s district, a sprawling swath of corn, soybeans and towering wind turbines, haven’t been quick to accept the influence from outsiders.

“He’s not what he’s portrayed to be by certain media outlets,” said Barb Clayton, a leading GOP activist in the district. Clayton says she “respects” King and believes his comments about white supremacy were taken out of context. Still, she’s backing one of his four opponents, though she won’t say whom, because she’s worried King’s diminished influence would cost him in November.

“My primary issues is being able to hold the seat. It makes it more difficult to do that when he’s lost his committees,” she said.

Sweeney, who has endorsed Feenstra, offered only glancing criticism of King.

“His comments at times were just off the cuff,” she said. “Sometimes some of them might have been him trying to be funny or cute, though some weren’t. In fact, some were repulsive.”

Still, Sweeney hosted two fundraisers at her home for King in 2014, when he faced what was expected to be a competitive challenge from former Iowa first lady Christie Vilsack, a Democrat. King won decisively.

By then, King had a reputation for controversial statements about race, immigration and religion.

In 2006, King proposed electrifying the U.S.-Mexico border fencing to curb illegal border crossings, saying, “We do that with livestock all the time.”

In 2013, he said for every one well-intended “Dreamer,” immigrants brought to the U.S. illegally as children, 100 more “weigh 130 pounds and they’ve got calves the size of cantaloupes” from hauling drugs across the desert.

In recent years, King received scrutiny for his overtures to foreign, right-wing extremists. The outreach prompted the House campaign committee to pull its financial backing in 2018. King was stripped of his membership on the House judiciary and agriculture committees the following January after he was quoted in the New York Times seeming to defend white nationalism.

The punishment sidelined King from defending President Donald Trump during the impeachment hearings, a spotlight King would have relished. It also silenced him on agriculture policy, a blow in a district that ranks second nationally in agricultural production, according to federal statistics.

But it hasn’t muted King. He’s continued to defend his hard-right abortion stance with provocative comments. Asked in August about his opposition to abortion in cases of rape and incest, he wondered whether there would be “any population of the world left” if not for births stemming from rape and incest.

Feenstra has called the comments “bizarre” but has not made them the focus of his critique of King. Instead, the 51-year-old former candy company executive promotes his work in the statehouse on big issues such as tax cut legislation, and attacks King for a lack of sway on farming and agribusiness issues.

It’s a tack that Iowa Republicans say is working, in part because it doesn’t shame Iowans who have long defended King.

“You move away from the argument that he’s an embarrassment and into an argument of effectiveness — when you get into that zone, people say this matters,” said Iowa Republican strategist John Stineman, who is unaffiliated with any campaign in the race.

King argues that establishment Republicans have targeted him for being such an effective defender of conservative causes.

“It’s no single thing,” King said. “But it gets back to their argument that this is part of a pattern with me they are uncomfortable with.”

But Feenstra’s focus on King’s diminished role also appears to have hit a nerve. In recent candidate forums, King started telling voters he has struck a deal with House leaders to resume his committee posts if he wins reelection.

King told The Associated Press that Minority Leader Kevin McCarthy said he would vouch for him when King appeals to his GOP colleagues for reinstatement.

“Congressman King’s comments cannot be exonerated, and I never said that,” McCarthy told reporters last week. “He’ll have the opportunity to make his case, talking to the members of the Steering Committee. I think he’ll get the same answer that he got before.”

If King pulls out a primary win, McCarthy could have another headache on his hands. Some fear mainstream Republicans might leave the ballot empty rather than vote for King, allowing Democrat J.D. Scholten, who lost by 2 percentage points in 2018, to win.

The National Republican Congressional Committee, the GOP’s congressional campaign arm, declined Friday to say whether it would support King in November or opt for a second time to withhold support.