Economy in crisis: more virus aid or wait and see?

Fear of vaccines isn't new, according to Mayo doctor

Walk-ins at Mayo, Weber and Gundersen in La Crosse for anyone who wants vaccine 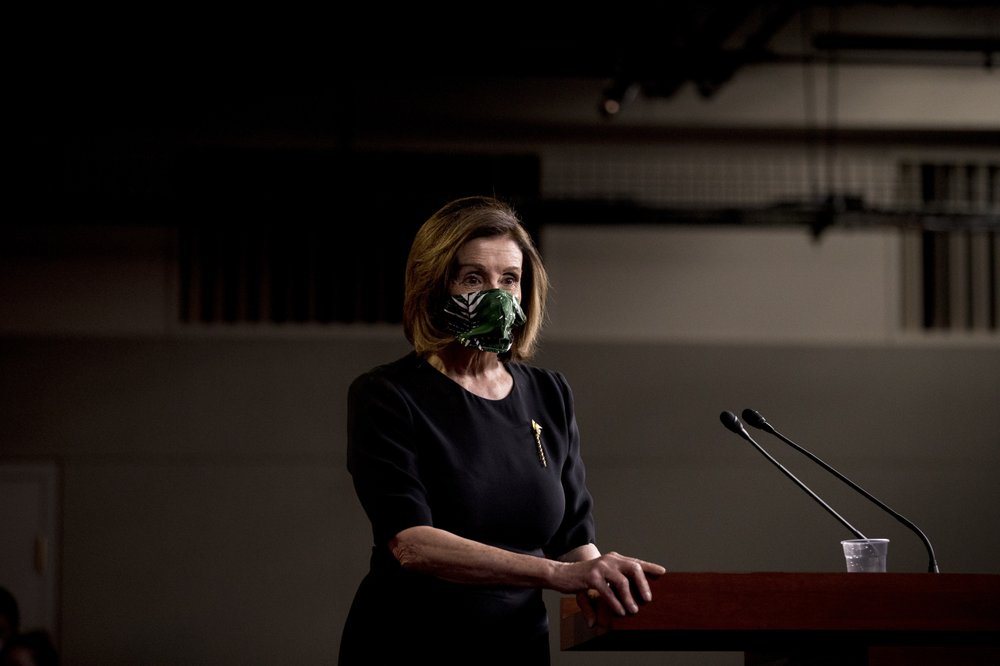 House Speaker Nancy Pelosi of Calif., wears a mask as she steps away from the podium at the conclusion of a news conference on Capitol Hill, Thursday, May 14, 2020, in Washington. (AP Photo/Andrew Harnik)

WASHINGTON (AP) — The unparalleled speed of the collapse of the U.S. economy, forcing more than 36 million Americans out of work, has left an all-too-common political divide, with many Republicans seeing reasons to believe the worst is over while Democrats call for more aid to stave off a possible depression.

After approving nearly $3 trillion to help stem staggering losses for businesses and workers, Republicans say they want to see if that aid is sufficient as unemployment claims slow and shelter-in-place orders are eased. But House Democrats argue that another $3 trillion rescue package is urgently needed or the crisis will worsen and workers could suffer permanent dislocation, a view shared generally by Federal Reserve Chairman Jerome Powell.

The political gridlock baffles many economists who see the need for action on multiple fronts.

“It’s crazy,” said Timothy Bartik, a senior economist at the Upjohn Institute in Michigan. “It makes no sense to me.”

One reason for their concern is the many uncertainties that lie ahead. Will the coronavirus start to fade as a threat? Will customers return to stores? Will colleges and schools reopen? Will smaller companies still have enough cash to operate as the lockdown eases?

What is clear are the risks of atrophy if the U.S. economy spends too much time shuttered, the risks of further job losses because of slashed state and city budgets and the risks for incumbents seeking reelection with the worst economic numbers since the Great Depression.

Bartik estimates that cutbacks by state and local governments due to lost tax revenues would cause the overall U.S. economy to shrink by 4% annually, unless the governments receive roughly $1 trillion in federal help over two years. His numbers align with the proposal by House Speaker Nancy Pelosi, though he would prefer if the funding was tied to economic data so that its distribution could be adjusted as needed.

But Democrats could err if they fail to find ways to reopen the economy, as the job losses are of such a magnitude that the economy could suffer lasting damage. Harvard University economist James Stock said at a webinar held Tuesday by the Brookings Institution that people need to start returning to their jobs, while avoiding mass gatherings such as baseball games and backyard barbecues in order to contain the disease.

“It’s clear we need to reopen the economy now — this is urgent,” said Stock, adding that the situation is delicate given the risks of a second wave of infections.

The situation is so uncertain that Powell took the unusual step of saying that lawmakers must do more for the communities that elected them.

His words were phrased in the language of bureaucrats, but his message was clear: More money is needed now.

“Additional fiscal support could be costly but worth it if it helps avoid long-term economic damage and leaves us with a stronger recovery,” Powell said Wednesday. “This trade-off is one for our elected representatives, who wield powers of taxation and spending.”

Voters have sent mixed messages about the economy and political leaders, as the vast majority of people who lost jobs expect to be rehired. More than half approve of President Donald Trump’s handling of the economy, even though 71% described economic conditions as poor.

Republicans can point toward some optimistic signs. Requests for unemployment aid fell to 3 million last week from a peak of 6.9 million at the end of March. Industry data hint that drops in retail spending bottomed out in the middle of April.

Their message has been that the U.S. economy deserves some time to digest the record financial aid that is already flowing through the economy. Republicans also hope easing stay-home orders will kick-start the economy and reduce the need for more aid.

“Our view is, let’s take a step back for a few weeks,” Treasury Secretary Steven Mnuchin told Fox Business Network on Thursday. “For now, we don’t need more money in the states. We need to see how this plays out.”

The Democrats’ package is centered on billions to help cash-strapped states and cities avert layoffs. Relying on historically low interest rates to finance spending, it includes another round of $1,200 cash payments to Americans, money for mortgage and rental assistance, and stepped up virus testing.

“The American people,” Pelosi said, “are worth it.”

But Trump declared the package “dead on arrival” and issued a veto threat. Senate Majority Leader Mitch McConnell labeled it “a seasonal catalog of left-wing oddities.”

The political division may ultimately reflect how the pandemic itself spreads, and the tensions might be resolved as the death toll mounts.

For every 100 people killed in Democratic states by COVID-19, only 31 had died in Republican states in early May, said Princeton University economist Angus Deaton, a Nobel laureate.

Deaton said it’s a lot to ask Republican lawmakers to hurt their own businesses and economic growth for an outbreak that is mostly affecting other states. But the current political dynamic could change as more deaths seep into Republican territory.

“It’s clear that as deaths move into red states there will be less political difficulty about helping states in trouble and a greater consensus for a smart opening,” Deaton said.

Still, both sides in the debate agree they have no playbook from a previous time. Within days of insisting Republicans were hitting “pause” with no Senate action until after Memorial Day, McConnell signaled a shift after private talks with the White House.

“We all believe that another bill probably is going to be necessary,” McConnell said late Thursday on Fox News. “But I’m not prepared today to put a precise date on when that will be.”