Only 4,000 have received results under Iowa testing program

Pettibone gets ready for "Haunted Mile"

Plans for 2020-themed art may be delayed in La Crosse 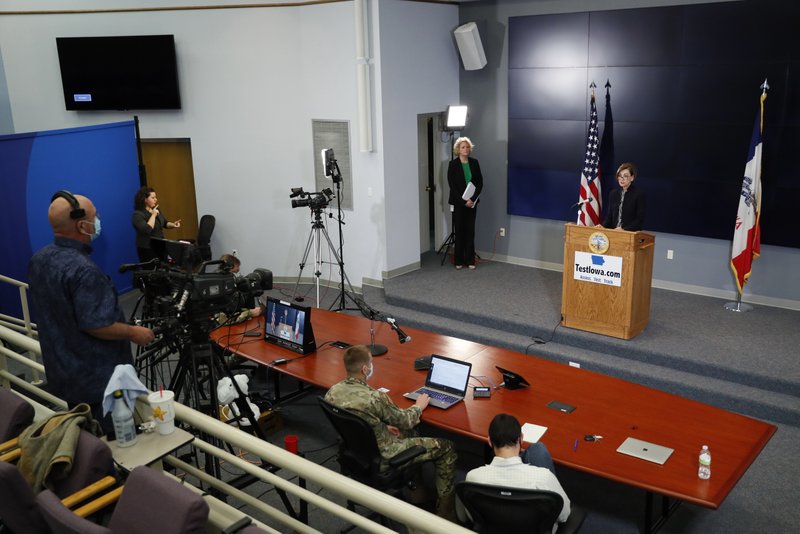 IOWA CITY, Iowa (AP) — Only 4,000 people have gotten results through Iowa’s month-old $26 million coronavirus testing contract, but that will increase rapidly now that the equipment has been validated, Gov. Kim Reynolds said Thursday.

Reynolds said the the State Hygienic Lab has determined that the machines purchased for the TestIowa program are 95% accurate in detecting the virus in samples and 99.7% accurate in determining its absence.

The validation will allow TestIowa to soon process 3,000 tests per day as originally envisioned, Reynolds said. She said it would also allow tests to be processed faster and the state to broaden the criteria of who can qualify for a test.

The announcement came as Iowa reported 12 more deaths from the virus and an uptick in hospitalizations. The state reported that 180 of the 318 deaths to date have been residents of long-term care facilities, where three dozen outbreaks have been confirmed.

Iowa signed a no-bid contract with Nomi Health, a Utah startup, one month ago to purchase 540,000 testing kits and supplies and 10 machines to process samples. Iowa paid $15 million up front under the deal, which was similar to one in Utah and quickly followed by Nebraska. A tip to the governor from homegrown celebrity Ashton Kutcher put the deal in motion.

On April 21, Reynolds announced the TestIowa program would be able to test 3,000 people per day at mobile sites around the state. Days later, she allowed many businesses in 77 counties to reopen, citing the increased testing capacity the program would bring. She has continued her push to reopen the economy since then.

But the testing has gotten off to a rocky start. Several of those tested at the first site in Des Moines on April 25 had to wait more than a week to receive results. Others reported that their results were inconclusive or that their samples were damaged and they had to be retested.

Many more say they’ve simply been unable to get tests, either because their online health assessments said they weren’t eligible or appointments have not been available. At the same time, some sites were only seeing a few dozen people in a day.

The state has released data showing 402,000 people have completed TestIowa assessments, which ask for personal contact and medical information. But until Thursday, the state hadn’t released the number of those who have gotten tests.

Another question mark was the accuracy of the tests, which were marketed by Co-Diagnostics under an emergency federal authorization granted last month. Scientists at the state lab in Coralville took several days to run the machines through a validation process, which they called standard for any new equipment but created a backlog.

Reynolds said Thursday that more than 4,000 people have gotten results through TestIowa and 300 others have been tested. She said the state will have eight drive-thru test sites in operation by Saturday and would soon open a call center to handle inquiries.

“For those Iowans who have reached out to tell us that we have fallen short of meeting their expectations, we hear you,” Reynolds said.

But she said she was proud of how quickly the program has been started and that some of the problems, like spoiled samples, are routine in large-scale testing.

She said the state and the lab had a “great partnership” with Nomi Health and its subcontractors, and that they were providing useful data.