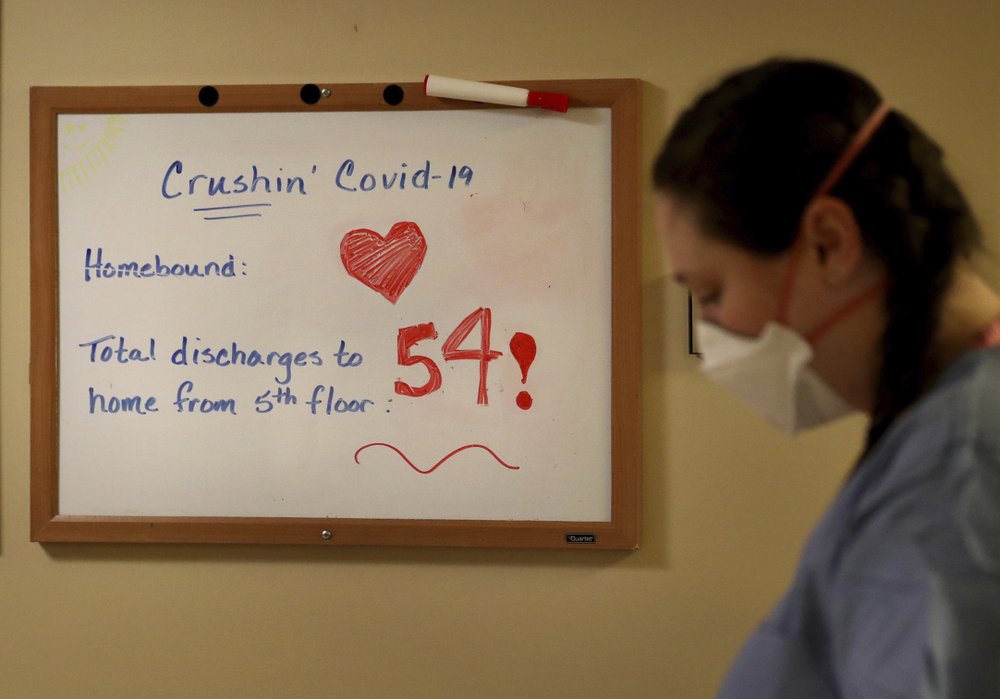 The number of COVID-19 patients recovered and discharged is tracked on a whiteboard on the fifth floor of Bethesda Hospital on Thursday, May 7, 2020, in St. Paul, Minn. (David Joles/Star Tribune via AP)

MINNEAPOLIS (AP) — The Minnesota Senate voted Monday to allow most businesses to reopen amid the COVID-19 pandemic as long as they follow safety guidelines, highlighting the divide between the chamber’s Republican majority and the more cautious approach of Democratic Gov. Tim Walz.

The bill passed 39-28, mostly along party lines, but it has little support in the House Democratic majority. Walz is still deciding to what degree he’ll extend his stay-at-home order before it expires next Monday.

GOP Sen. Andrew Mathews, of Princeton, said the bill would provide a “safe path” for companies, particularly small businesses like salons and mom-and-pop shops, to reopen if they follow federal and state government guidelines.ADVERTISEMENT

“As the Legislature has partnered with the governor in so many areas to help make a strong coronavirus response during these last couple of months, this is one key area that we are asking that the governor help also partner with us,” Mathews said.

But Democratic Sen. Bobby Joe Champion, of Minneapolis, said Walz is already taking “meaningful steps” to reopen the economy, noting that 80% of Minnesota’s workforce is already exempt from the stay-at-home order, and that the governor relaxed the rules to allow up to 20,000 businesses to reopen for curbside commerce starting last Monday.

“To reopen more businesses we need to take steps that are rooted in reliable science and data,” Champion said.

The Minnesota Department of Health on Monday reported 13 new COVID-19 deaths to raise the state’s total to 591. The department also reported 528 new confirmed infections for total of 11,799. Officials say that’s an undercount because not everyone who gets infected gets tested, though Health Commissioner Jan Malcolm on Monday reiterated new guidelines that say everyone with COVID-19 symptoms should get tested now that the state’s testing capability is growing.

Malcolm downplayed the quiet release over the weekend of a new scenario under the state’s COVID-19 model. It predicted somewhat more deaths and more intensive care unit stays if the stay-at-home order is extended until the end of the month, compared with lifting the order but keeping some protections in place. The new scenario pushed the projected peak out by two more weeks until July 27, with roughly 25,000 deaths and a peak demand for ICU beds of 4,000.

That led some senators to suggest that there’s little benefit to maintaining the order. But Malcolm said the projection was “out of date almost as soon as it was posted” because the model itself will be updated this week. She said she couldn’t comment on whether the new model would show the same results until it is run.ADVERTISEMENT

State Health Economist Stefan Gildemeister said they modeled that scenario as “just a bit of an afterthought” after an inquiry from the governor’s office.

The Senate gave Walz one thing he wanted Monday. It voted 62-5 to extend the deadline until Dec. 31 for spending the $36 million left in a $200 million fund approved in the early days of the pandemic to cover the costs of the emergency response. Monday had been the deadline for spending the money, or it would have reverted to the state’s general find.

Senate Majority Leader Paul Gazelka, a Republican from East Gull Lake, said legislative leaders were still negotiating with the governor over the bigger issue of what do with about $2 billion in federal stimulus money that will cover more of the state’s costs of fighting the pandemic, and to what extent the Legislature should have oversight over how it’s spent.