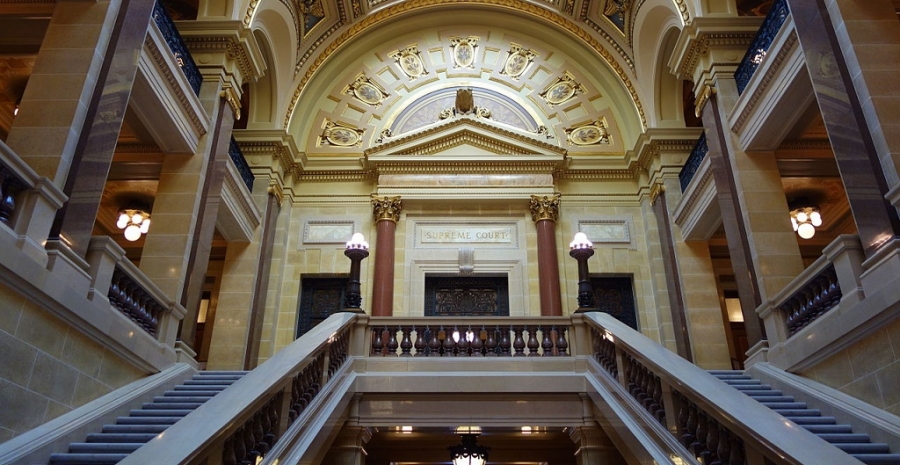 MADISON, Wis. (AP) — Conservative justices who control the Wisconsin Supreme Court raised doubts Tuesday about whether Democratic Gov. Tony Evers’ stay-at-home order is legal, asserting that the Legislature never intended to give the executive branch so much power.

“There is a constitutional problem with the Legislature giving away this much power to an unelected cabinet secretary,” Bradley said. “The people never consented to a single individual having that much power.”

Evers issued an order in March requiring people to stay in their homes and avoid nonessential travel to curb the spread of the coronavirus. The order also required schools and nonessential businesses to close and banned public gatherings. Palm, a member of Evers’ Cabinet, unilaterally extended the order until May 26 at the governor’s direction.

Republican legislators filed a lawsuit directly with the Supreme Court arguing Palm overstepped her authority. They contend the order is really an administrative rule and as such is subject to legislative approval. They’ve asked the court to issue an injunction blocking the rule but stay imposition for six days to give the DHS time to properly promulgate an emergency administrative rule.

The administration’s attorneys have countered that state law clearly gives the DHS broad authority to combat communicable diseases. They face an uphill fight, though. Conservatives hold a 5-2 majority on the court.

“The people have no means to oversee this exercise of power that derives from them in the first place,” he said.

The arguments grew testy as the conservative justices seemed to paint the order as an Evers’ power grab.

“People can go to prison for leaving their homes unless it’s OK with the DHS secretary,” Bradley said during an exchange with DHS’s attorney, Assistant Attorney General Colin Roth. “Under your interpretation of the statutes, she can do whatever she wants and can order people to go to jail if they don’t comply. The secretary could step in and do this every flu season.”

Roth argued that lawmakers in the past granted the DHS broad authority to fight diseases because they understood the state may have to move quickly. The secretary wouldn’t impose such strict limitations during every flu season because there’s no support from the medical community for such drastic steps, he said.

Blocking the stay-at-home order now would be “devastating and extraordinarily unwise,” Roth said.

“The disease will spread like wildfire with no weapon to fight it,” he added. “People will die if this order is enjoined with nothing to replace it.”

Ziegler said that even if the justices agree the pandemic is a “pretty bad scenario” and the order makes sense they must apply the constitution and the law.

It’s unclear when the court may rule.

Also on Tuesday, the Wisconsin Department of Health Services announced new metrics hospitals must meet in order to enter the first phase of Evers’ reopening plan. Ninety-five percent of hospitals must affirm they can treat all patients without crisis care, such as inadequate staffing, and 95% would also have to arrange for testing for all symptomatic clinical staff treating patients.

As of Tuesday, 353 people had died from the virus in Wisconsin and there were more than 8,500 positive cases.

The state Department of Transportation also announced that 16- and 17-year-olds will not have to take a road test in order to receive their driver’s license under a new pilot program to address a backlog and limit in-person visits to service centers. Also, drivers age 64 and under will be given the option to renew their driver’s license online. The changes take effect Monday and are expected to remain in place for the remainder of the year.