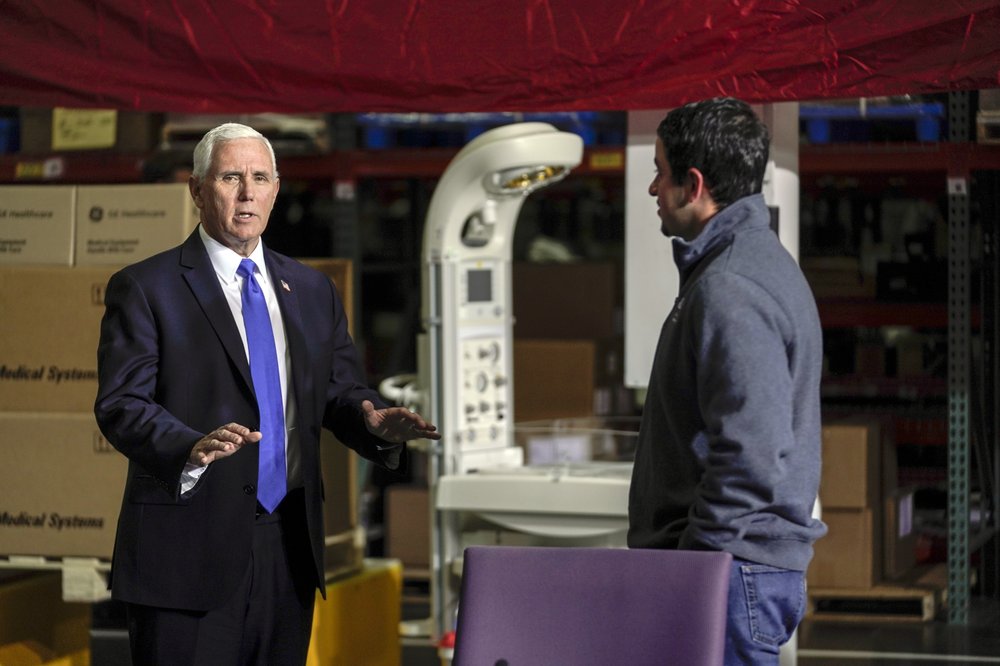 MADISON, Wis. (AP) — Republicans who control the Wisconsin Legislature asked the state Supreme Court on Tuesday to block an extension of the Democratic governor’s stay-at-home order, the most partisan divide yet in the fight against the coronavirus.

The lawsuit came even as Vice President Mike Pence said during a tour of a Madison ventilator manufacturer that social distancing and other mitigation efforts are slowing the spread of COVID-19.

The lawsuit was expected after Gov. Tony Evers’ health secretary last week ordered most nonessential businesses to remain closed until May 26. The original order had been scheduled to end Friday.

Vos and Fitzgerald said there was “immense frustration” with the extension, which the lawsuit argues if left in place will devastate the economy and leave Wisconsin “in shambles.” Protests against the order have popped up around the state, with one scheduled for Friday at the Capitol.

Earlier Tuesday, Evers defended the extended stay-at-home order as part of a “24-7 war against the virus,.”

On Monday, Evers released his plan for reopening Wisconsin that requires, among other things, a 14-day decline in positive COVID-19 cases and more protective equipment, tests and other supplies to deal with the pandemic. He said his plan mirrors guidelines issued by President Donald Trump’s administration.

“I just accepted the biggest Republican in the country, his plan, because it’s a rational plan,” Evers said. “Now, if the state Republicans don’t think Donald Trump is appropriate, they can deal with Donald Trump, I guess.”

Also Tuesday, Pence visited GE Healthcare in Madison, where he thanked the workers manufacturing ventilators for patients hospitalized with the virus. He said embracing social distancing and other mitigation efforts have slowed the spread of the virus and freed up capacity in the health care system.

Democrats used Pence’s visit to criticize the federal response to the pandemic.

Pence, who has sought to assure states about federal help, posed with GE Healthcare employees and accepted a T-shirt that said “Union machinists saves lives.” He thanked them and their union for upping production.

GE Healthcare announced last month that it was doubling ventilator production and expanding the Madison facility to become a 24-hour operation. GE said it plans to double production again by the end of June.

Wisconsin does not have the supplies it needs to combat the virus, said U.S. Sen. Tammy Baldwin and U.S. Reps. Gwen Moore and Mark Pocan, all Democrats, in a letter to Trump sent Monday.

The criticism echoes concerns from Evers and other governors.

Pocan, citing a letter from the Federal Emergency Management Agency, said Wisconsin has received only a fraction of the supplies that Evers requested. The White House provided a tally that included supplies provided by FEMA and purchased from private vendors.

Wisconsin has received about 2,800 out of 60,000 plastic tips requested for testing and about 3,500 out of 10,000 testing swabs, according to letters between the state and federal officials provided by Pocan. It has also not received the number of reagent kits and other testing materials that Evers requested in March.

In a letter to Pocan, Baldwin and Moore, FEMA regional administrator James Joseph said the agency has made “enormous efforts” to fulfill Wisconsin’s needs but that global demand outpaces supply.

To date, 242 people have died in Wisconsin and more than 4,600 have tested positive. There were 358 people hospitalized for COVID-19 as of Monday, a decline of 83 patients over the past seven days.