Would you give up health or location data to return to work? 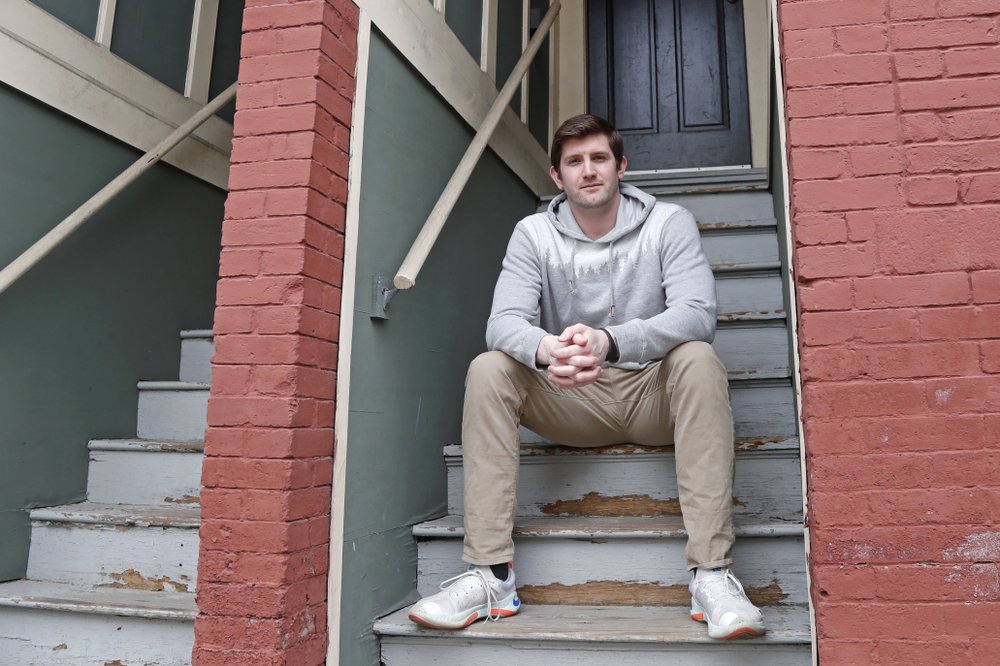 Cameron Karosis, 27, a software salesman, poses for a portrait outside his home, Tuesday, April 14, 2020, in Cambridge, Mass. Karosis usually strives to protect his personal information. But a scary bout with COVID-19 that began with headaches and fevers, progressed to breathing problems and led to a hospital visit has now left him eager to disclose as much as possible to help halt the virus' spread. “I’m sick and I’m under a quarantine -- hold me accountable for it,” he said. “You have the potential to kill other people.” (AP Photo/Elise Amendola)

WASHINGTON (AP) — Cameron Karosis usually strives to protect his personal information. But a scary bout of COVID-19 that began last month with headaches and fevers, progressed to breathing problems and led to a hospital visit has now left him eager to disclose as much as possible to help halt the virus’ spread.

Karosis has already shared personal details with Massachusetts health investigators. And if he was asked to comply with a disease-tracking phone app that monitored his whereabouts but didn’t publicly reveal his name and Cambridge street address, he said he’d do that, too.

“I’m sick and I’m under a quarantine — hold me accountable for it,” the 27-year-old software salesman said. “You have the potential to kill other people.”

As countries around the world edge toward ending lockdowns and restarting their economies and societies, citizens are being more closely monitored, in nations rich and poor, authoritarian and free.

New systems to track who is infected and who isn’t, and where they’ve been, have been created or extended in China, South Korea and Singapore. And a range of other surveillance systems – some utilizing GPS location data, some gathering medical data – have been debated or piloted in Israel, Germany, the U.K., Italy and elsewhere.

The challenge: achieving the tricky balance between limiting the spread of disease and allowing people freedom to move outside their homes.

Whether the prospect on the table is “immunity passports” or cellphone-based tracking apps, the aim is to protect public health. But experts say it’s also important to avoid a slippery-slope scenario where data collected to minimize the spread of disease is stored indefinitely, available without limits to law enforcement or susceptible to hackers.

Right now, there is no single official plan for reopening the United States, where the constitutional system gives states responsibility for maintaining public safety and where deaths from COVID-19 continue to rise steeply.

Scientists believe that the hundreds of thousands of people who already have recovered from the virus worldwide are likely to have some immunity to future infection, but they aren’t sure for how long. To ensure new cases don’t overwhelm hospital capacity, any plans to relax lockdowns will include provisions to track infections.

“The virus is not going away – if we all just come out on a certain date, it will spread widely again,” said Dr. Tom Frieden, an infectious disease expert and former director of the U.S. Centers for Disease Control and Prevention. “That means we need to think carefully about how and when we come out.”

Dr. Anthony Fauci, the White House’s top disease expert, said the administration has looked at the idea of issuing certificates of immunity to people whose blood tests reveal they have developed antibodies to fight the virus, among other possible plans. Yet they haven’t concluded that approach would be effective, he told the Associated Press on Tuesday.

“I know people are anxious to say, ‘Well, we’ll give you a passport that says you’re antibody-positive, you can go to work and you’re protected.’ The worst possibility that would happen is if we’re actually wrong about that” and those people get infected.

Meanwhile, public health agencies from Massachusetts to the city of San Francisco have hired a surge of people to run “contact tracing” teams. Their mission is to identify anyone who has recently been in contact with someone who tests positive for COVID-19, then encourage those people to get tested and perhaps isolate themselves. These meetings can be sensitive and require training, and support, to pull off effectively.

Aiming to take the tracing approach to a new scale are tech giants Apple and Google, which are jointly working to build smartphone technology that alerts users if they shared a park bench or grocery store aisle with a stranger later found to be infected with the virus.

Unlike the more invasive location-tracking methods attempted by some governments, the Apple-Google approach uses Bluetooth beacons to detect physical proximity and encrypted keys to maintain people’s anonymity. The companies say they’re building the software for public health departments only, on the condition that they won’t make use of them mandatory.

In addition to developing the technology, experts warn that the implications of deploying such devices need to be carefully considered. Who will collect and verify the data? How long will it be held? Will enough people use a voluntary app for it to be helpful?

“We know from history that ‘emergency measures’ too often last long beyond their initial expiry date,” said Deborah Brown, a senior researcher at Human Rights Watch.

She also noted that systems that monitor cell-phone location or GPS data reveal more than just where someone has recently been. “Your contacts and associations can be gleaned, potentially your religious or political beliefs,” she said — for instance, if you’ve visited a church or mosque.

Susan Landau, a cybersecurity professor at Tufts University, said she has doubts about the effectiveness of relying on smartphone-based approaches, even if the apps are carefully designed to protect individual privacy.

“My real concern about the whole thing is I think it’s being oversold,” she said. “Does it reduce spread? I don’t doubt that. Does it enable us to eliminate social distancing? No, not as long as there’s a high portion of people who are asymptomatic.”

It’s one thing to merely send a phone alert that someone exposed to a COVID-19 case should self-isolate for 14 days. It’s another to have government workers bring them groceries or other essentials to make that quarantine period possible if someone would otherwise have trouble complying, she said.

After the various lockdowns lift, it’s not clear how readily Americans will submit to tracking efforts.

Cameron Karosis had his mind changed by contracting the virus, but many others are still wrestling with the prospect of how far they’d be willing to go.

“Personally, I would not be thrilled to be forced into downloading an app, mostly because I don’t love the idea of Silicon Valley knowing even more about me than they already do,” said Maura Cunningham, a writer in Ann Arbor, Michigan. “But I’d probably give in on that pretty quickly if it were made a widespread prerequisite for getting back to normal activity at some point in the future. I’d definitely resist a blood test — that just feels too intrusive.”