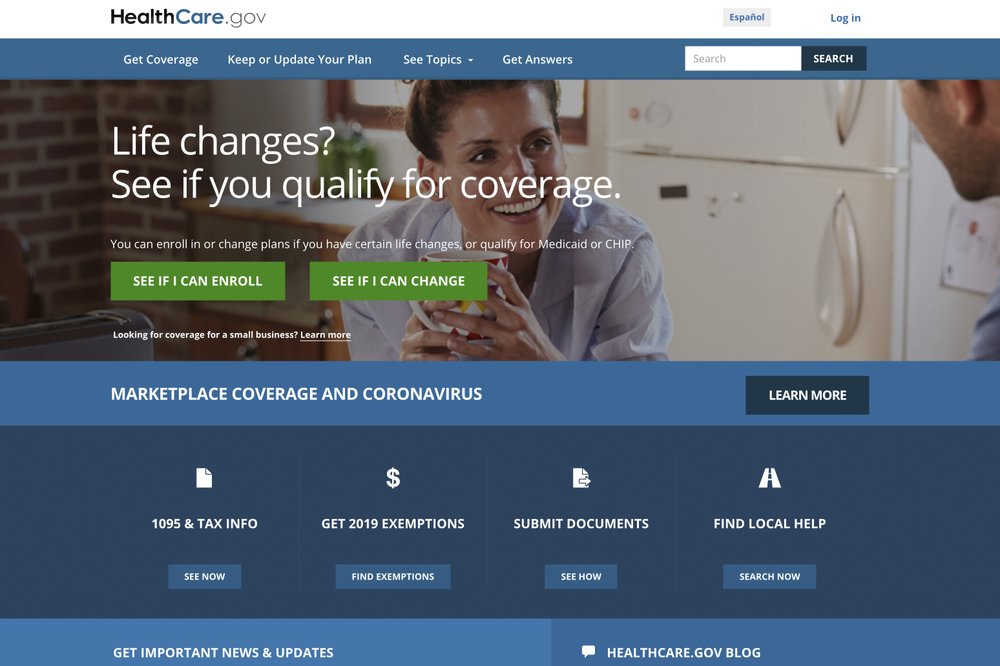 In this image provided by U.S. Centers for Medicare & Medicaid Service, the website for HealthCare.gov is seen. The Trump administration’s opposition to “Obamacare” could become an obstacle to helping millions of uninsured people in the coronavirus outbreak, as well as many workers who are losing coverage because of the economic shutdown. Experts say the Affordable Care Act’s insurance markets provide an infrastructure for extending subsidized private coverage in every state. (U.S. Centers for Medicare & Medicaid Service via AP)

WASHINGTON (AP) — The Trump administration’s unrelenting opposition to “Obamacare” could become an obstacle for millions of uninsured people in the coronavirus outbreak, as well as many who are losing coverage in the economic shutdown.

Experts say the Affordable Care Act’s insurance markets provide a ready-made infrastructure for extending subsidized private coverage in every state, allowing more people access to medical treatment before they get so sick they have to go to the emergency room. In about three-fourths of the states, expanded Medicaid is also available to low-income people.

But the Trump administration has resisted reopening the ACA’s HealthCare.gov marketplace for uninsured people who missed the last sign-up period. And it doesn’t seem to be doing much to inform people who lost job-based coverage that they’re eligible for insurance now through the ACA.

State-run exchanges prominently promote the availability of coverage, but users of HealthCare.gov have to go through a series of clicks to get that information.

“There is definitely a greater prioritization of coronavirus on the state exchange websites,” said Katherine Hempstead of the nonpartisan Robert Wood Johnson Foundation. “The state exchanges put a message about coronavirus along the top of their home page — ‘above the fold’ — while on HealthCare.gov it appears that it’s business as usual until you scroll down.”

On Monday, leading congressional Democrats wrote Health and Human Services Secretary Alex Azar to urge reopening HealthCare.gov and a focused effort to inform people who lose job-based coverage of their rights to an ACA plan.

“Many remain unaware of how to sign up or the existence of financial assistance to lower their costs,” wrote Reps. Richard Neal, D-Mass., Frank Pallone, D-N.J., and Bobby Scott, D-Va, along with Sens. Ron Wyden, D-Ore., and Patty Murray, D-Wash.

Some of the biggest coverage gains under the Obama-era law came among African Americans and Hispanics, groups that face grave complications from coronavirus infections due to high rates of underlying diseases like diabetes.

In a statement, HHS did not address the question of opening the health insurance marketplaces, as several states have. The agency referred people who have lost job-based coverage to a page on the HealthCare.gov site.

Instead of taking a similar approach as states like New York and California, the Trump administration has directed hospitals to use part of a $100 billion health system relief fund to offset costs of treating uninsured patients with COVID-19.

The American Medical Association says that money won’t be enough. COVID-19 treatment for the uninsured could cost from $14 billion to $48 billion, according to a recent estimate from the nonpartisan Kaiser Family Foundation. And Congress intended the stimulus bill to help hospitals and medical offices meet basic operating costs.

“We need to leverage the Affordable Care Act so it can serve as the strong safety net that our country needs, especially given the job disruption that is causing many Americans to lose their health insurance,” said AMA President Dr. Patrice Harris.

The American Hospital Association supports opening up HealthCare.gov and a new, separate fund to pay for treating the uninsured.

The Trump administration is facing three big challenges with uninsured people and with those who’ve been laid off and lost coverage:

— Before the coronavirus outbreak about 28 million people were uninsured. Many would have been eligible for Obamacare but failed to sign up. Without a new enrollment period, most are out of options. If they get infected by the coronavirus, they might postpone seeking help until they get really sick, hurting their own chances and exposing others to infection.

— Another group of between 12 million and 35 million people could lose workplace coverage, according to an estimate by the research and consulting firm Health Management Associates. People in this group are entitled to a special sign-up opportunity through HealthCare.gov and some may be eligible for Medicaid. That’s if they know about these options.

— It’s unknown how well HealthCare.gov would handle a wave of sign-ups outside the normal open enrollment season. Democratic Reps. Mark Pocan of Wisconsin and Jan Schakowsky of Illinois recently raised concerns about the potential for coronavirus to spread at call centers that service Obamacare and Medicare. Officials with the Centers for Medicare and Medicaid Services say the agency is protecting workers and moving to facilitate telework.

Officially, the Trump administration remains committed to overturning the Obama-era health law, which will soon face another test at the Supreme Court.

But President Donald Trump has sent plenty of signals that he’s aware the cost of coronavirus treatment could become a political problem.

He’s successfully pressed insurers to waive copays and deductibles for testing, and he’s pushing on treatment costs as well. Yet if there’s a surge of uninsured people unable to afford treatment it could overtake the White House as rapidly as the outbreak itself did.

“The fact that we have a health crisis in combination with an economic crisis is going to put the issue of health coverage more prominently on the agenda again,” said Drew Altman, president of the Kaiser Family Foundation.

With more than 1 in 10 workers recently losing jobs, the mainstay of employer coverage will shrink. Government programs are intended to take up the slack. How much, and how smoothly that happens, will have political ramifications for November’s elections.

New Jersey Democratic Rep. Pallone said expanding coverage under the Obama health law “is the practical thing to do” and called the Trump administration’s efforts “patchwork.”

Democrats want to make health care a central element of the next coronavirus bill.

“We want to open up the enrollment again so people can sign up,” Pallone said.