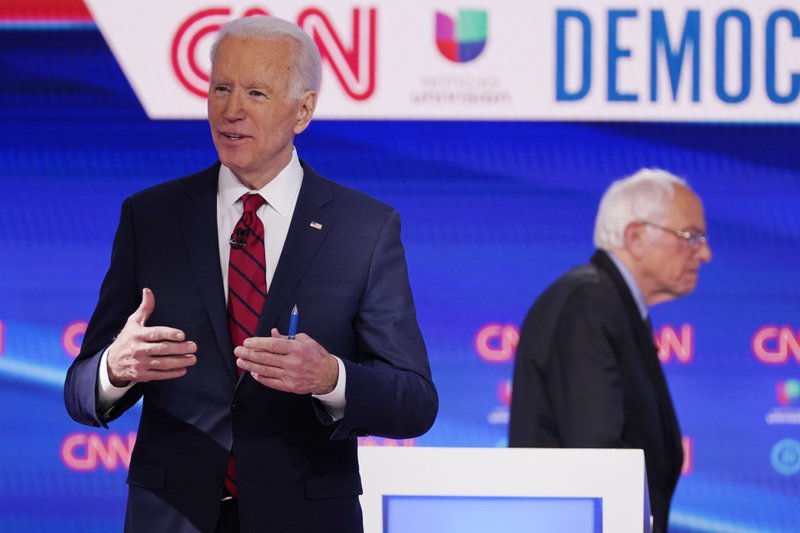 WASHINGTON (AP) — Joe Biden attempted to lure progressives to his presidential campaign on Thursday with promises to expand Medicare and forgive college debt.

The presumptive Democratic presidential nominee backed lowering the Medicare eligibility age from 65 to 60 while also pledging to cancel student debt for many low- and middle-income borrowers.

The moves came a day after progressive leader Bernie Sanders ended his presidential campaign, leaving the relatively centrist Biden as the Democrat who will challenge President Donald Trump. With Sanders out of the race, it’s critically important for Biden to bridge the party’s ideological divide so Democrats can go into the fall unified against Trump.

“Senator Sanders and his supporters can take pride in their work in laying the groundwork for these ideas,” Biden wrote in an online post announcing what he called “two important steps we can take to help ease the economic burden on working people.”

Biden’s campaign is at a critical juncture at the outset of the general election. If he gives too much to progressives, he could be portrayed as too far left, an argument the Trump campaign is already trying to make. But if he doesn’t bring Democrats together, he risks going into the fall with the same vulnerabilities as Hillary Clinton in 2016.

“When faced with the choice of President Trump’s record of accomplishment or Biden’s far-left agenda, the choice for voters is clear,” she said.

Neither of the proposals Biden released Thursday goes as far as Sanders has suggested in the past. And progressives made clear they weren’t ready to rally behind Biden, even if he’s the last Democrat standing to take on Trump.

“We can try all we want to use our leverage as a movement but, at the end of the day, I wouldn’t expect anything coming from the establishment, the Biden campaign or the Democratic National Committee as a way to bring in the base,” said Nomiki Konst, who worked on Democratic Party reforms on Sanders’ behalf. “I think they want power — and I think they want money.”

Biden has set limits on how far he’ll go to please progressives. He’s not embracing Medicare for All universal health insurance and the sweeping Green New Deal to combat climate change. He has, however, backed an overhaul of bankruptcy laws proposed by Massachusetts Sen. Elizabeth Warren, the other leading progressive, who ended her presidential bid last month.

“The calculation is, this base has nowhere to go but Biden because of Trump,” she said. “But if history teaches anything, a lot of the base sat it out last time.”

DeMoro noted that, after 2016, many Sanders supporters knew he would try again for the presidency four years later. That seems unlikely going forward, potentially raising the profile of rising-star congressional progressives such as New York Rep. Alexandria Ocasio-Cortez, who endorsed Sanders, and Massachusetts Rep. Ayanna Pressley, who was a Warren backer.

Though he’s suspended his campaign, Sanders’ name will remain on the ballot in states that have not yet weighed in on the primary. He said Wednesday he still wants to collect delegates to influence the party platform.

Maurice Mitchell, national director of the Working Families Party, which backed Warren before shifting its support to Sanders when she dropped out, said Biden’s goal is to rebuild the Obama coalition, which spanned generations, races and education levels. But he said Biden won’t be able to do that without attracting the support of “young people committed to real, progressive change” who were most enthusiastic about Sanders.

He added the answer: It “can’t be done simply through rhetorical flourishes.”

Jennifer Epps-Addison, co-executive director of the Center for Popular Democracy Action, which endorsed Sanders, said progressives “are a real constituency” that Biden “will have to earn the votes of.”

“’Vote blue no matter what’ is absolutely not a winning electoral strategy,” Epps-Addison said. “Biden has some real negatives.”

The movement’s next leaders might focus on building bridges with moderates, however, rather than burning them — an approach Warren and Ocasio-Cortez have more closely adopted than some top Sanders supporters.

“Progressives have done a very effective job of moving the mainstream of the party in a more progressive direction,” said Sean McElwee, founder of Data for Progress, a data and messaging organization. “Many people in the Democratic Party have progressive sensibilities, and the way you win them over is you build relationships.”

Biden aides, meanwhile, began outreach to Sanders’ camp to discuss policy weeks before the senator suspended his campaign. That included meeting with progressive leaders from at least two groups, the Sunrise Movement and March for Our Lives, who co-signed a letter Wednesday making certain demands of Biden if he hopes to win them over.

The former vice president himself also has had conversations with some of his former rivals — the kind of direct interactions that preceded his adopting Warren’s bankruptcy proposals.

Larry Cohen, chairman of Our Revolution, the offshoot of Sanders’ 2016 campaign, said he’d like to see the same kind of moves on other core issues for progressives. That could mean, instead of Biden building his “public option” health insurance plan as something only individuals can buy into, he could structure it so employers could buy in with their employees.

Whatever the outcome, Cohen argued that activist groups must stay aligned to maintain leverage. “The grassroots,” he said, “has to reach out together.”