Summing up the Tuesday *bleep* show, that was voting in Wisconsin 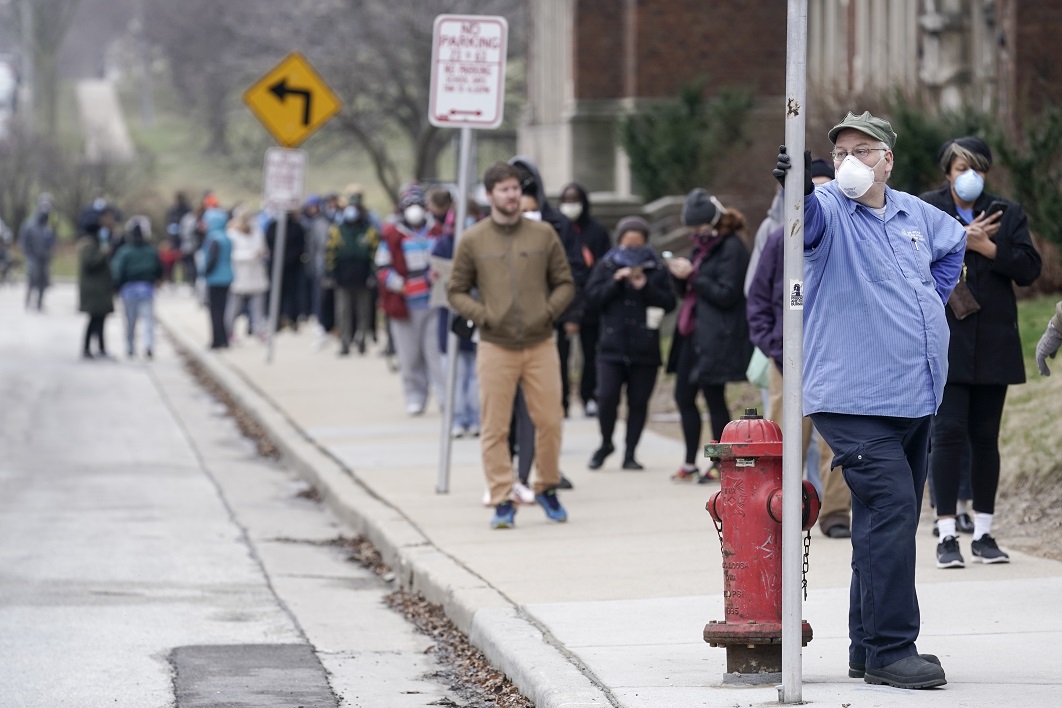 Voters masked against coronavirus line up at Riverside High School for Wisconsin's primary election Tuesday April 7, 2020, in Milwaukee. The new coronavirus causes mild or moderate symptoms for most people, but for some, especially older adults and people with existing health problems, it can cause more severe illness or death. (AP Photo/Morry Gash)

It all happened within 24 hours in Wisconsin ending in citizens risking their health during a virus outbreak to head to the polls.

“The big problem with how this all went down is the lack of clear communication, the lack of decisive leadership, and just the fast pace with which all of these decisions were made,” University of Wisconsin-La Crosse political science professor Anthony Chergosky said Tuesday on La Crosse Talk PM. “This is like a total breakdown of state government.”

Results for Tueday’s election, however, won’t be known until April 13, because of the backlog of absentee ballots — some of which never made it in time to potential voters — mostly because of a Republican lawsuit challenging the absentee deadline.

Chergosky added, the entire mess would have probably been altered safely for voters, with something like mail-in ballots, had there not been a state Supreme Court seat with a 10-year term on the line for Republicans.

“The calculation within the Republican Party is that lower turnout would tend to favor their cause,” Chergosky said. “So, if this thing carries on for like another month, another two months, in terms of people being able to vote, people being mailed ballots, then all the sudden, they’re getting nervous about the possibility of Dan Kelly losing his seat.”

Even Donald Trump hinted a few days ago that doing things like mailing all registered voters a ballot — which five states currently already do for their entire election process — would, well, in the President’s words, be the end of all Republicans.

“The things they had in there were crazy,” Trump said on Fox and Friends, referring to Democratic proposals that are already a thing. “They had levels of voting that, if you ever agreed to it, you’d never have a Republican elected in this country again.”

The blame over Wisconsin’s elections, however, can be pointed to all parties.

“No one comes out of this situation looking good. It’s one of those situations where everybody has screwed up in some respect.”

Evers put into effect a “safer-at-home” order March 25 but, at that time, didn’t think the election needed to be cancelled or moved.

Two days later, however, he changed his mind. That’s when he asked the Republican-controlled legislature to send every voter in the state an absentee ballot. Meanwhile, four lawsuits were going through the courts to either postpone the election, or change how people can vote.

After no action by the legislature for a week, Evers, last Friday, called a special session for the next day — three days before the election — to work something out with Republicans to avoid in-person voting as the pandemic sweeps cities like Milwaukee and Madison. Republicans ended that special session in seconds.

Then the bleep-show began. Early Monday, Evers made an executive order to cancel in-person voting — despite saying days earlier he didn’t have the power to do so — and called for another special session by the legislature for Tuesday.

Instead, the Wisconsin GOP sent the order right to the state Supreme Court, which ruled around 5 p.m. along “ideological” lines, shooting down Evers’ order 4-2 — all four “conservative” judges voting against the ruling and the two “liberal” judges voting for it.

An hour after that, the U.S. Supreme Court overturned two lower court rulings, on a 5-4 vote — also along “ideological” lines — canceling a federal judge’s ruling to simply extend turning in absentee ballots by six days. The news coming out, with a little over 12 hours before polls opened, while voters had thought for five days they had an extension through April 13.

Over the past week, Milwaukee saw its polling places drop from 180 to five, as over 1,000 volunteers quit over virus fears. Even La Crosse dropped polling stations from 13 to eight.

Across the state, municipalities saw 60 percent of poll workers leave, all while nearly 1.2 million absentee ballots were requested Friday — a deadline that was extended by a day — but less than half had been returned.