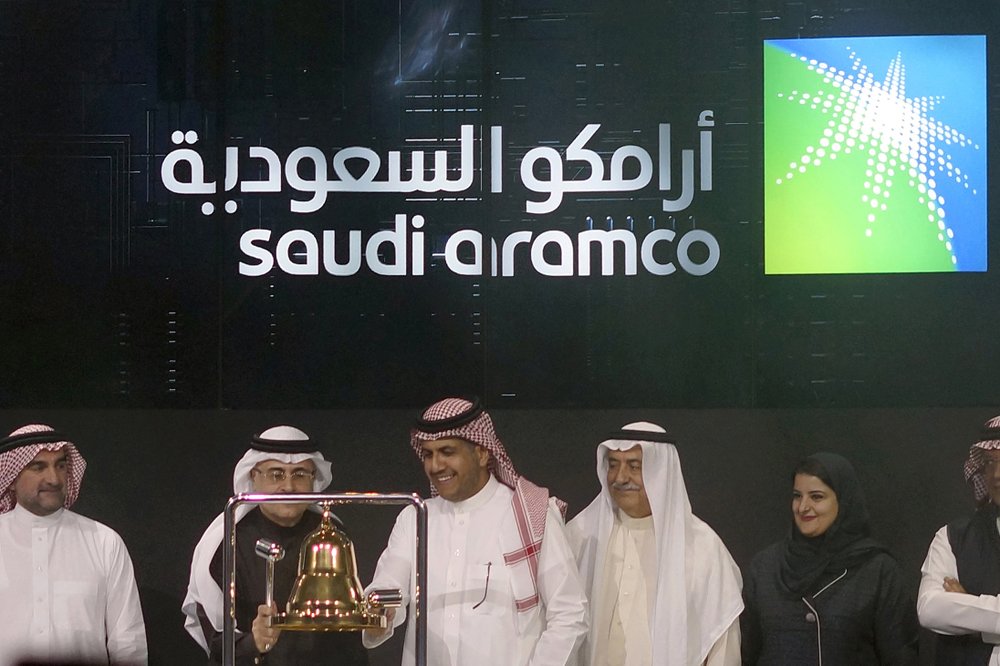 FILE - In this Dec. 11, 2019, file photo, Saudi Arabia's state-owned oil company Armco and stock market officials celebrate during the official ceremony marking the debut of Aramco's initial public offering (IPO) on the Riyadh's stock market, in Riyadh, Saudi Arabia. Saudi Arabia's oil company Aramco said Wednesday, march 11, 2020, it will increase production capacity to 13 million barrels per day, up from 12 million per day, part of a strategy to dominate market share amid a slowdown in demand due to the outbreak of a new virus. (AP Photo/Amr Nabil, File)

But the Kremlin disputed part of his tweet, leading to skepticism that a deal was imminent.

A global glut in production, coupled with an economy reeling from the coronavirus pandemic, has sent energy prices to lows not seen since 2002. Trump tweeted Thursday that he had spoken with Saudi Crown Prince Mohammad Bin Salman, just days after talking to Russian President Vladimir Putin about the matter.

Trump tweeted; “I expect & hope that they will be cutting back approximately 10 Million Barrels, and maybe substantially more which, if it happens, will be GREAT for the oil & gas industry!” He also tweeted that Prince Mohammed bin Salman had spoken with Putin, and later tweeted the presumed production cut could be as high as 15 million barrels.

But Kremlin spokesman Dmitry Peskov said Putin and the prince have not spoken recently. “No, there wasn’t such a conversation,” he said, according to Russian state news agency Tass.

Nevertheless, U.S. benchmark crude climbed more than 20% Thursday after Trump’s tweet. Even with those gains, prices are down 60% from the start of the year.

The clash is taking place during a period of vastly reduced energy demand. The pandemic arrived with the global economy entering a cycle of slower growth. The confluence has pushed Brent crude oil prices to below $30 a barrel, far below what Saudi Arabia or Russia need to balance their budgets. The price of U.S. crude fell harder than at any point in history, plunging more than 65%, to around $20 per barrel, lower than what many U.S. shale companies can withstand.

In a statement carried on the state-run Saudi Press Agency Thursday, the kingdom said its call for a meeting of major oil producers indicates the country’s support for the global economy at this time, and is “in appreciation of” Trump and the request made by the United States. It said the purpose of calling a meeting is aimed at reaching a fair agreement to restore balance to the oil market.

The state-run news agency in Saudi Arabia noted that a call took place between Trump and the crown prince, but made no mention of Trump’s specific call on Saudi Arabia to cut production.

Trump also has said he will meet with U.S. oil and gas company executives Friday.

There is skepticism over an international deal, however.

“There’s going to be resistance from all parties to making a cutback that’s really going to make a difference,” said Michael Lynch, president of Strategic Energy & Economic Research.

Trump’s engagement could persuade Saudi Arabia, if not the Kremlin, to relent, said Kevin Book, managing director at Clearview Energy Partners. But an agreement to reduce output by 10 million or 15 million barrels per day would likely require U.S. cuts, too, he said.

One oil industry regulator in Texas, Ryan Sitton, has been discussing the possibility of pro-rating production in his state, although a formal proposal hasn’t been made.

“I need to be at least talking about what that might look like,” Sitton said in an interview. “If the president were to step into a deal or step into negotiations and help get a deal done, if I can give him a tool to bring to the table then I’d like to explore it.”

Low crude prices make many drilling operations in the U.S. unsustainable, and in response companies have announced thousands of layoffs and furloughs. At the same time, for most consumers, falling oil prices can be a blessing. Some stations are selling gasoline for less than $1 a gallon, though the national average is closer to $2, and many Americans staying home won’t see a benefit from low gas prices.