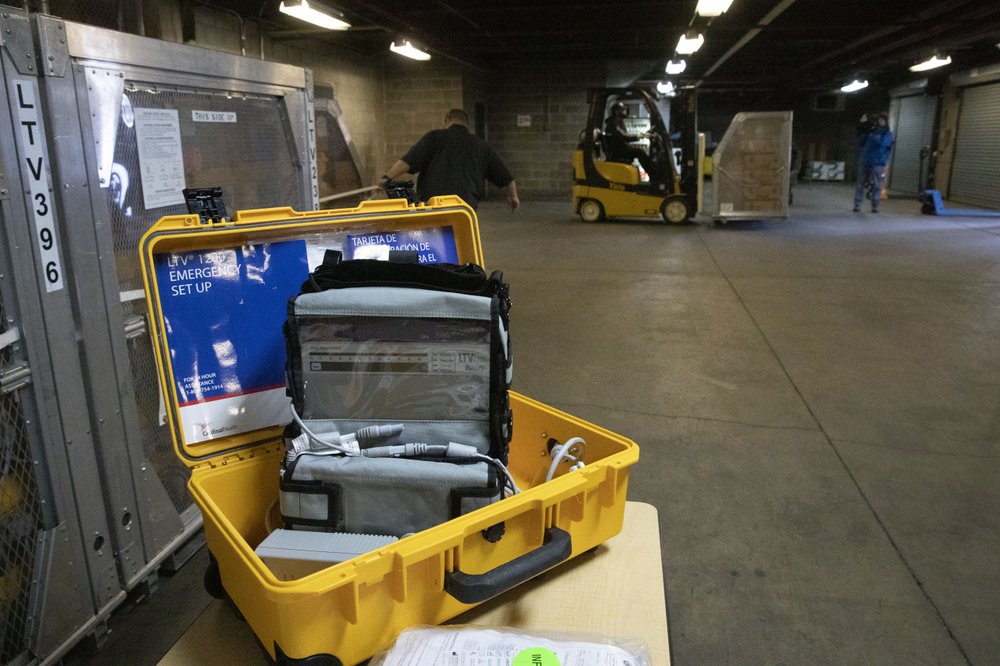 A ventilator is displayed during a news conference, Tuesday, March 24, 2020 at the New York City Emergency Management Warehouse, where 400 ventilators have arrived and will be distributed. Gov. Andrew Cuomo has sounded his most dire warning yet about the coronavirus pandemic on Tuesday, saying the infection rate in New York is accelerating and the state could be two to three weeks away from a crisis. (AP Photo/Mark Lennihan)

WASHINGTON (AP) — Two weeks ago, the Pentagon promised to make as many as 2,000 military ventilators available as the federal government strains to contend with the coronavirus pandemic. As of Wednesday, less than half had been allocated, despite a desperate need across the country.

At the Federal Emergency Management Agency, tasked with coordinating the federal response to the outbreak, about 9,000 additional ventilators are also on hold as officials seek to determine where they are needed most urgently.

The combination of scarce supply and high need has sent many states onto the open market, where they are bidding for ventilators from private manufacturers. Their competition in that bidding process: both the federal government and other states.

“It’s like being on eBay with 50 other states bidding on a ventilator,” said New York Gov. Andrew Cuomo, whose state is the epicenter of the pandemic in the United States. He urged FEMA to step in and act as a single purchaser of the vital machines.

The slow deployment of ventilators underscores the ways in which the sprawling federal bureaucracy has fallen short in the crisis. Demand for medical equipment far outpaces the current supply, and the stockpiles that do exist aren’t enough for the hardest-hit areas. That undercuts the air of confidence projected by President Donald Trump at his daily briefings.

Cuomo, whose state has had more than 92,000 cases of COVID-19, warned Thursday that New York has only 2,200 ventilators in its own stockpile after shipping out 600 to New York City, Westchester and Long Island. He would run out in six days at this rate.

It’s not just ventilators. FEMA has been able to fill only a fraction of the requests for protective equipment and medical supplies requested by the five Mid-Atlantic states and the District of Columbia, according to documents released by Rep. Carolyn B. Maloney, who chairs the Oversight and Reform committee.

The shortfalls include less than 10% of the requested number of N95 protective masks and none of 15,000 body bags requested.

But ventilators have emerged as crucial medical tools in treating patients. The machines pump air to a person’s lungs through a tube inserted in the windpipe and can be lifesaving for severely ill patients.

The government had 9,961 ventilators as of Thursday, including 9,054 in the stockpile and 907 from the Department of Defense, according to FEMA.

The Health and Human Services Department, which manages the stockpile, said Thursday it has 2,109 ventilators that are undergoing required maintenance. Those are not included in the tally of machines that can be deployed. The goal is to complete all the maintenance by April 30.

In Louisiana, where coronavirus cases are skyrocketing, Gov. John Bel Edwards has requested 14,000 ventilators from the federal government and private companies. To date, the state has received just 442, including 150 that arrived Wednesday from the national stockpile.

“The 150 will only get us about a day or so, maybe two if we get really lucky before we’ve exceeded that capacity again,” Edwards said.

“People who have needed ventilators have been able to get on ventilators and I think that’s our goal, with governors and with the mayors, to make sure that continues to happen,” said Dr. Deborah Birx, the coordinator of the White House coronavirus task force.

FEMA spokeswoman Lizzie Litzow said states should not expect any shipments until they are within 72 hours of a crisis situation.

Several states have hit that point. The federal government has deployed 2,400 ventilators to New York City, and an additional 2,000 for the rest of the state. FEMA said Wednesday that it was sending machines from the national stockpile to Michigan, New Jersey, Illinois, Connecticut and Louisiana.

Still, the numbers deployed to some of the states pale in comparison to what officials say they need. Michigan, which reported nearly 10,000 cases as of Wednesday, says it will need between 5,000-10,000 machines. It received 400 ventilators from FEMA on Tuesday.

Connecticut Governor Ned Lamont said Wednesday that his state has nearly 1,000 ventilators and requested an additional 1,500 from the national stockpile. It received 50.

Lawmakers have called repeatedly on the federal government to publicly account for how it is distributing ventilators and personal protective equipment but say they haven’t received answers.

The Pentagon’s announcement two weeks ago that it had 2,000 ventilators available appeared good news. But much of that stockpile is earmarked for a pair of hospital ships and military field hospitals being deployed to take some of the patient load off other facilities.

About 900 Pentagon ventilators are sitting idle, waiting for FEMA to ask for access.

Rather than begin that training now, the agency says it is focusing on allocating conventional ventilators already in its stockpiles. FEMA said those are the types commonly used by U.S. hospitals and are “better suited for immediate use.” It remains unclear how federal officials plan to address the issue of training civilians in local hospitals.

Trump has defended his administration’s deployment of ventilators and said the federal government is doing all it can. He has taken steps to compel General Motors to make more of the machines, though the company was already moving in that direction before the president’s order. He issued an order Thursday under the Defense Production Act aimed at ensuring manufacturers have the supplies to make the machines.

GM said in a statement with Ventec last week that they expect to deliver the first ventilators within weeks and will initially produce more than 10,000 per month.

Ford, in collaboration with GE Healthcare, said Tuesday it expects to produce 50,000 of the ventilators within the next 100 days.