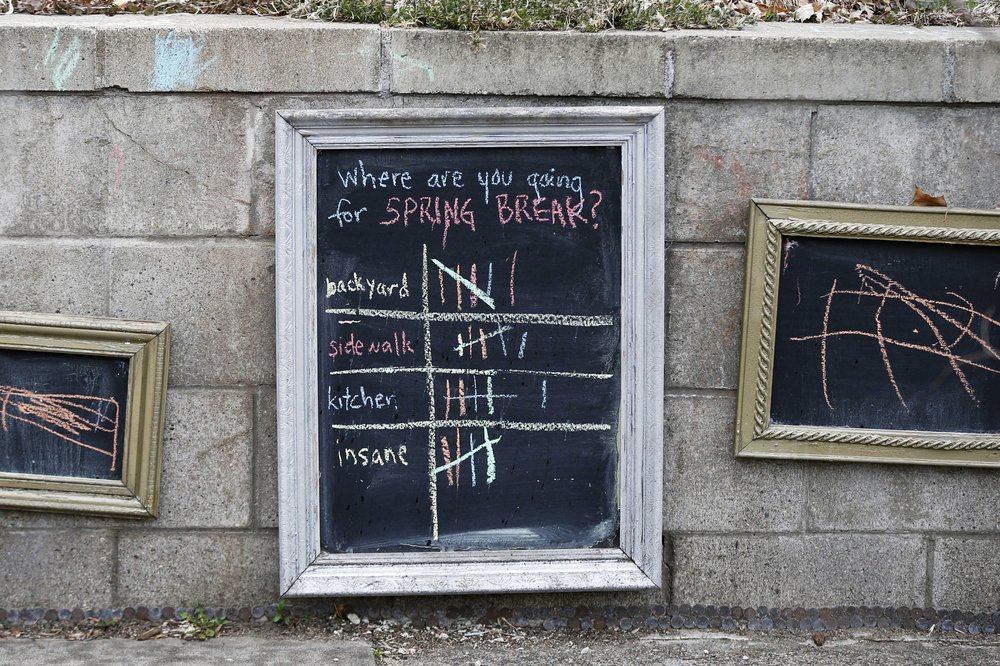 For lighter moments during the coronavirus pandemic, passersby had an opportunity to vote for their stay at home spring break moments on the retaining wall of a home Thursday, April 2, 2020, in St. Paul, Minn. The new coronavirus causes mild or moderate symptoms for most people, but for some, especially older adults and people with existing health problems, it can cause more severe illness or death. (AP Photo/Jim Mone)

MINNEAPOLIS (AP) — Many Minnesotans won’t need to pay out of pocket if they need treatment for COVID-19, and the state will start releasing the names of most senior living and other long-term care centers hit by outbreaks of the disease, officials said Thursday.

Six major health plans have agreed to to waive copayments and coinsurance requirements for COVID-19 testing and in-network hospitalizations, and to grant expanded access to telemedicine services so people can receive care at home.

The Minnesota Department of Health reported one new COVID-19 death Thursday, raising the state’s total to 18. The state’s confirmed cases continued to rise, with 53 new cases for a total of 742 since the outbreak began. But 373 of those patients have recovered. Officials caution that those numbers are way low because not everyone qualifies for testing. Seventy-five patients were hospitalized Thursday, a jump of 21 since Wednesday, with 38 in intensive care, up 11 from Wednesday.

The health plans that have agreed to waive cost-sharing are Blue Cross and Blue Shield of Minnesota, HealthPartners, Hennepin Health, Medica, PreferredOne and UCare. The agreement runs through at least May 31. The agreement does not cover people who are on self-insured plans through their employers because the state lacks the authority. And it doesn’t cover victims who get sent to out-of-network hospitals, though the state is still trying for that.

“Our goal is that if you get sick with COVID-19, your focus should only be on getting better and recovering,” Commerce Commissioner Steve Kelley said. “You shouldn’t have to worry about getting a bill that could ruin you financially, especially during this difficult time.”

The health of residents at long-term care facilities has become a particular source of concern, but the health department had been refusing to provide the names of the 47 facilities with at least one infection, citing patient privacy.

The state’s homeland security director, Joe Kelly, announced on the call that Walz will ask President Donald Trump for a major disaster declaration for the state due to the pandemic, an upgrade from the current emergency declaration. The effect will be to add crisis counseling assistance to the list of costs for which the federal government provides full reimbursement, he said.