What’s essential? In France: pastry, wine. In US: golf, guns 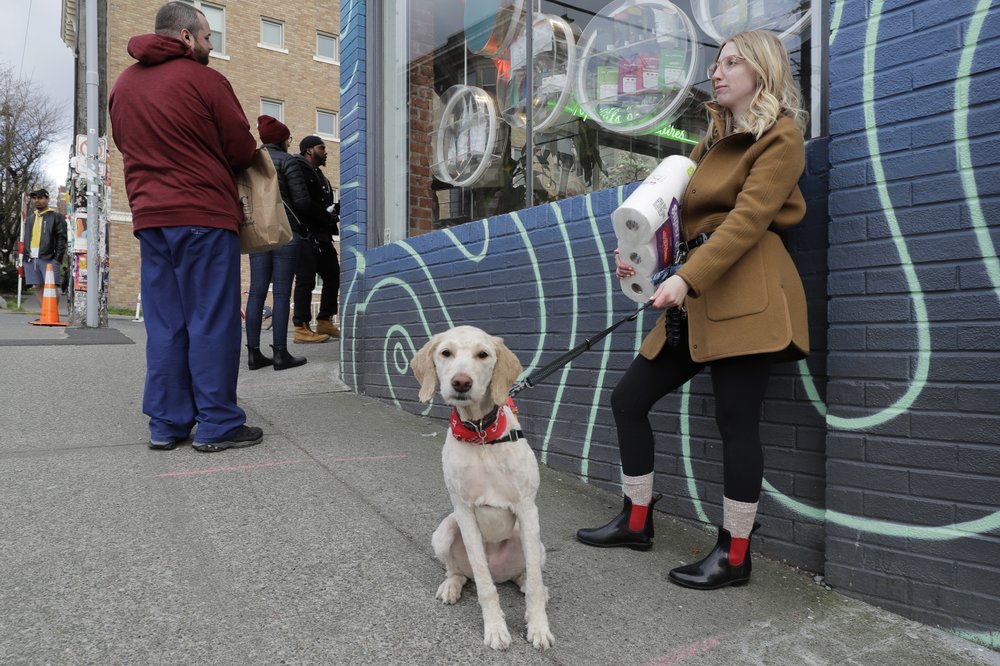 In this photo taken March 24, 2020, Mia Grace, right, holds a package of toilet paper as she and her dog Breezy observe social distancing chalk marks on the sidewalk while waiting to get in to The Reef Capitol Hill, a marijuana store in Seattle, which was limiting the number of people in the store at one time to help slow the spread of the new coronavirus. Earlier in the week, Washington Gov. Jay Inslee ordered nonessential businesses to close and the state's more than 7 million residents to stay home in order to slow the spread of the new coronavirus. In Washington and several other states where marijuana is legal, pot shops and workers in the market's supply chain were deemed essential and allowed to remain open. (AP Photo/Ted S. Warren)

The coronavirus pandemic is defining for the globe what’s “essential” and what things we really can’t do without, even though we might not need them for survival.

Attempting to slow the spread of the virus, authorities in many places are determining what shops and services can remain open. They’re also restricting citizens from leaving their homes. Stay-at-home orders or guidance are affecting more than one-fifth of the world’s population.

This has left many contemplating an existential question: What, really, is essential?

Whether it is in Asia, Europe, Africa or the United States, there’s general agreement: Health care workers, law enforcement, utility workers, food production and communications are generally exempt from lockdowns.

But some lists of exempted activities reflect a national identity, or the efforts of lobbyists.

In some U.S. states, golf, guns and ganja have been ruled essential, raising eyebrows and — in the case of guns — a good deal of ire.

MORE ON THE PANDEMIC
– Rhode Island door knocks in search of fleeing New Yorkers
– The Latest: Michigan executive order restores water service
– Coronavirus roils every segment of US child welfare system
– Living outside lockdown: Barbers, beauty shops still open
In many places, booze is also on the list of essentials. Britain at first kept liquor stores off its list of businesses allowed to remain open, but after reports of supermarkets running out of beer, wine and spirits, the government quickly added them.

“Recent events clearly demonstrate that the process of designating ‘essential services’ is as much about culture as any legal-political reality about what is necessary to keep society functioning,” said Christopher McKnight Nichols, associate professor of history at Oregon State University.

Countries including India and U.S. states are listing the information technology sector as essential. The world’s dependency on the internet has become even more apparent as countless people confined to their homes communicate, stream movies and play games online to stave off cabin fever.

Several states where marijuana is legal, such as California and Washington, deemed pot shops and workers in the market’s supply chain essential. For some, the emphasis is on medicinal uses, not enabling cooped-up people to get stoned.

“Cannabis is a safe and effective treatment that millions of Americans rely on to maintain productive daily lives while suffering from diseases and ailments,” Erik Altieri, executive director of the National Organization for the Reform of Marijuana Laws, said in an email. “It is the very definition of essential that these individuals can still access their medicine at this time.”

Newtown Action Alliance, a group formed after a gunman killed 26 people in 2012 at the Sandy Hook Elementary School in Newtown, Connecticut, urged Lamont to reconsider, noting a recent surge in gun and ammunition purchases. The group predicted an “increased number of deaths due to unintentional shootings, homicides and suicides.”

“If you have a break down in society, well then our first line to defend ourselves is ourselves, so I think having a weapon … is very important for your personal safety,” Texas Lt. Gov. Dan Patrick told a radio interviewer.

Pennsylvania Gov. Tom Wolf on Tuesday quietly allowed gun shops to reopen, but only by appointment during limited hours if customers and employees comply with social distancing and other protective measures.

There is a lot of variation across the United States because a national stay-at-home order has not been issued, said Benjamin Clark, associate professor of planning, public policy and management at the University of Oregon.

“We end up with places making up the rules that are culturally or geographically specific,” Clark said. “This is why we see so much variation, and potential risk.”

In Europe, the current epicenter of the pandemic, Italy has the most stringent rules, with only essential businesses such as food shops and pharmacies remaining open. The manufacturing sector was ordered shut down on Thursday, though factories that make needed products like medical supplies will continue to operate after making conditions safer for employees.

Britain, which was initially reluctant to shut down business, has issued orders to close nonessential operations. Restaurants and eateries must be shut, but Britons can still get fish and chips and other meals, as long as they’re carry-out.

In France, shops specializing in pastry, wine and cheese have been declared essential businesses.

In a nod to Israel’s vibrant religious life, people can gather for outdoor prayers — with a maximum of 10 worshipers standing 2 meters (2 yards) apart. Demonstrations — also allowed — have occurred outside parliament and the Supreme Court, with participants maintaining social distance.

“In times of uncertainty, institutions and practices that are central to the cultural identities can become really important touchstones — material markers of certainty, comfort, and mechanisms to persist,” said Aimee Huff, marketing professor at Oregon State University, specializing in consumer culture.

In China, authorities closed most businesses and public facilities beginning in late January but kept open hospitals, supermarkets and pharmacies. Truck drivers delivering food, disinfectant and medical supplies to locked-down cities were hailed as heroes. Now, the ruling Communist Party is relaxing restrictions to revive the economy after declaring victory over the outbreak.

For most people, the new coronavirus causes mild or moderate symptoms, such as fever and cough. For some, especially older adults and people with existing conditions, it can cause more severe illness, including pneumonia, and death.

In the United States, lobbyists have been trying to influence what gets on lists of essential services, so their clients’ businesses can remain open.

“They were absolutely earning their pay” in Connecticut, said Reiss, the governor’s spokesman. He noted lobbyists for manufacturers and the golf course industry were particularly active.

Despite their efforts, golf wasn’t deemed essential in Connecticut. But Arizona Gov. Doug Ducey included golf courses on his list. Officials in Phoenix encouraged the city’s 1.7 million residents to “get outside, get exercise and practice responsible social distancing” in golf courses, parks and trails.

Mayors of five other Arizona cities pushed back, telling Ducey that including golf courses and payday lenders was taking the definition of essential too far.

If construction in America’s most populous state stalls — as it it did during the Great Recession — it would be difficult to restart, said Erika Bjork of the Sacramento Metropolitan Chamber of Commerce, which advocated for the industry.

“We need to keep this engine humming, so when we come out of this we have housing,” Bjork said.

Like Britain, some U.S. states allowed liquor stores to remain open, including New Mexico, which routinely ranks first in alcohol-related deaths per capita.

State health officials were concerned that shutting them down would result in people with alcoholism seeking emergency medical attention, taking resources away from the coronavirus, said Tripp Stelnicki, a spokesman for New Mexico Gov. Michelle Lujan Grisham.

In New Hampshire, Gov. Chris Sununu said flower shops are among the essentials.