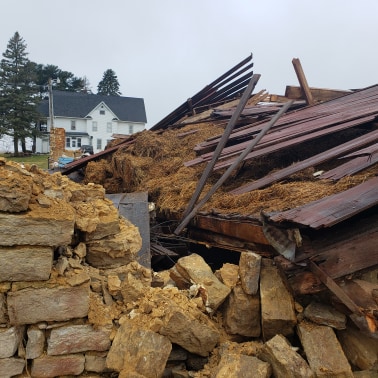 The National Weather Service said a nearly 7-mile tornado track went from one mile north of Potosi to two miles west/northwest of Ellenboro. The EF-1 tornado came through from 8:35-8:40 p.m. reaching peak winds of 100 mph.

Henry Frear shared photos of an old barn on their property that collapsed in the storm.

Frear said they consider themselves lucky as several other families still active in production agriculture had severe damage. He noted a neighbor whose feedlot was hit as well as another who had a shed strewn across the roadway.

No injuries have been reported.

The National Weather Service also announced a rain-wrapped tornado formed near the Fayette Co. line south of Oelwein around 6:33 p.m. Saturday and went northeast into the west side of the city.

That tornado caused damage to apartment buildings and trees.

Meteorologists said that tornado may have traveled up to seven miles northeast of Maynard, Iowa. That EF-1 storm hit peak winds of 107 mph.

A powerful storm ripped through southwest Wisconsin Saturday night with heavy rain and strong winds that damaged homes and brought down farm buildings.

Additionally, a house was damaged on Seemore Ridge Road. Trees and debris were reported over Hudson Hollow Road.

There are no known injuries at this time. Braun said damage assessment would continue Sunday morning.