Networks face decision: How long to stick with Trump? 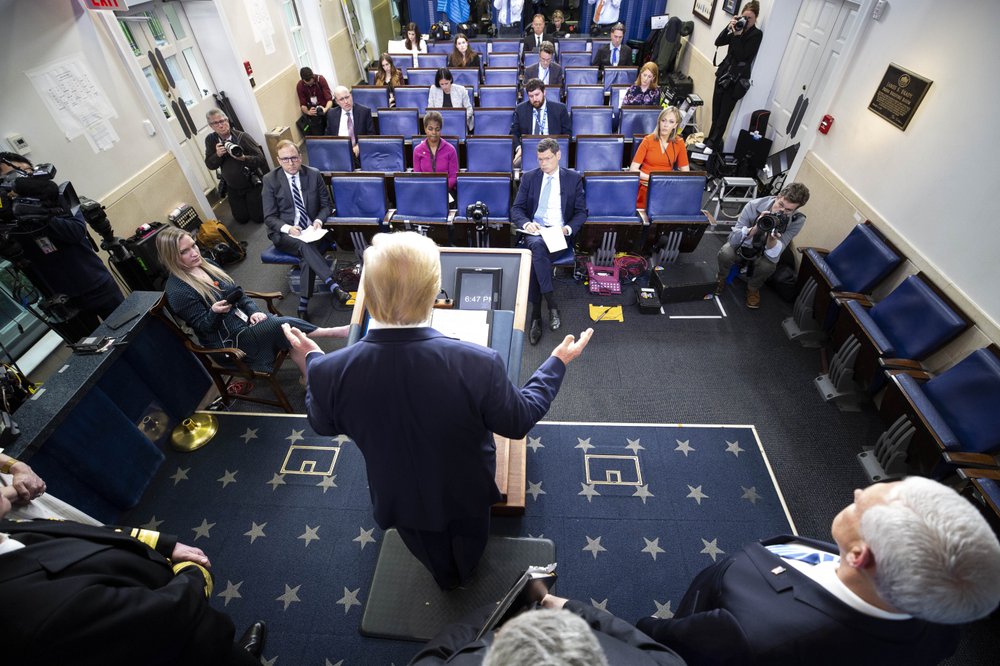 It was a notable turning point in coverage of the president’s now-daily briefings. Networks had been starting to hear criticism of how much time they have been showing the president answering questions live, reminiscent of a similar debate in the past about showing Trump’s campaign rallies.

Still, there’s a difference between political rallies and a White House discussion of a national emergency.

ABC, CBS and NBC all covered Trump at the beginning of Monday’s briefing, which began about 6:10 p.m. Eastern. After 20 minutes, they switched to the network evening newscasts, never to return to Trump. The president spoke until shortly after 8 p.m.

The cable news networks have given Trump blanket coverage for his briefings, but CNN cut away Monday at around 7:20 p.m. MSNBC followed within five minutes.

Of its own decision to stop showing Trump live, CNN said that “if the White House wants to ask for time on the network, they should make an official request. Otherwise we will make our own editorial decisions.”

MSNBC, through a spokesperson, said that “we cut away because the information no longer appeared to be valuable to the important ongoing discussion around public health.”

The network’s top star, Rachel Maddow, had said Friday night that television networks should no longer show Trump live. She cited examples of what she called false or misleading statements the president had made in past briefings, from general suggestions that the government had the virus under control to more specific discussions about drug treatments.

“All of us should stop broadcasting it, honestly,” she said. “It’s going to cost lives.”

The Washington Post’s media critic, Margaret Sullivan, wrote Monday that the briefings were beginning to sound like substitutes for Trump’s campaign rallies, and were working against the goal of giving the public critical and truthful information.

“They have become a daily stage for Trump to play his greatest hits to captive audience members,” she said.

On Monday, after he had dismissed most of the administration officials who had stood near him on the podium, Trump talked about his briefings. By then, only Fox was televising him.

“I don’t want to stand here for two hours and do this but I think it’s important,” he said. “I call it getting it out of your system. We don’t want to just answer two questions and leave.”

He said some of the questions were repetitive, but others were good and led to problems being solved.

“At least you can say I’m very transparent,” he said.

He spoke to an emptier room of reporters. More space has been placed between reporters since it was revealed that one correspondent had a suspected case of the disease.

The briefings have attracted public interest, perhaps in part due to more people being at home and able to watch. For the three cable news networks, five Trump briefings last week each had more than double the audience the networks had for the same time period a year earlier, the Nielsen company said.

For example, Fox News Channel, CNN and MSNBC attracted 8.28 million viewers for Trump’s briefing Friday, nearly half of them watching Fox. The audience for those networks a year earlier was 2.82 million, Nielsen said.

“When people are tuning in in droves to watch a news event, that tells you that they’re interested in it — and you have to pay attention to that,” said Jonathan Klein, a former CNN president.

One option for news executives worried that Trump might try to mislead the public could be to air briefings on tape delay so inaccuracies could be pointed out, he said.

Given the importance of the story, though, “I don’t think they have a choice” but to air the briefings, said Klein, who spoke in an interview shortly after Monday’s session began.