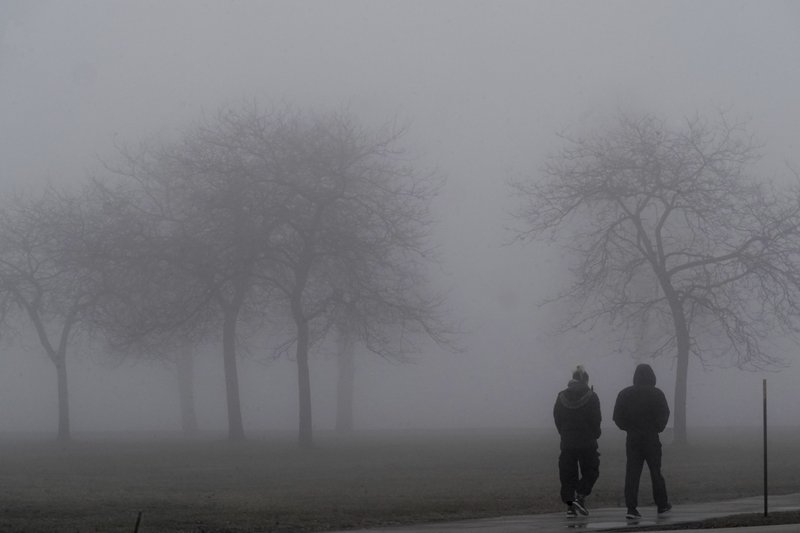 Pedestrians walk near the shore of Lake Michigan on a foggy Thursday March 19, 2020, in Milwaukee. (AP Photo/Morry Gash)

MADISON, Wis. (AP) — Wisconsin reported a third coronavirus death Friday, as a bipartisan trio of mayors objected to proceeding with the April 7 presidential primary and Milwaukee’s mayor became the latest politician to self-quarantine.

The Milwaukee County Medical Examiner said Friday it was investigating the death of a 66-year-old man who died from complications of a COVID-19 infection. The medical examiner said the Milwaukee man had been hospitalized for several days prior to his death.

For most people, the coronavirus causes only mild or moderate symptoms, such as fever and cough. For some, especially older adults and people with existing health problems, it can cause more severe illness, including pneumonia. The vast majority of people recover.

Also on Friday, the mayors of Green Bay, Appleton and Neenah joined together to object to holding the April 7 spring election and presidential primary, given concerns about spreading the virus. The mayors, two Republicans and one Democrat, scheduled a news conference to detail their concerns.

State election officials and Evers, among others, have urged voters to cast absentee ballots to avoid having to physically be present at the polls. But Evers has rejected calls to move the date of the primary, as several other states with spring elections have done.

The Wisconsin Elections Commission this week outlined a host of potential problems with holding the election, including a drop in available poll workers because many of them are older and high-risk for complications from the virus.

In addition to the presidential primary, there is a state Supreme Court race on the ballot and hundreds of local elections for mayor, city council, school board and other offices.

Milwaukee Mayor Tom Barrett, who is on the ballot, announced Thursday night that he was self-quarantining for two weeks after learning he had come into contact with someone who tested positive for the coronavirus. The 66-year-old Barrett is a Democrat seeking a fifth term as mayor.