‘Bigger than any one of us’: Biden, Sanders take on pandemic 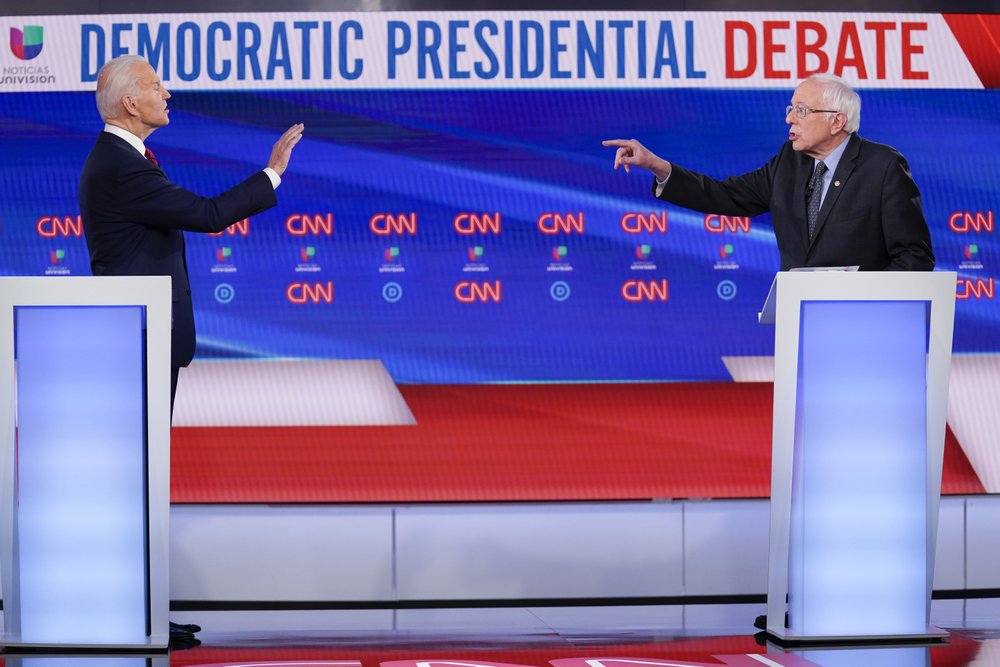 WASHINGTON (AP) — Former Vice President Joe Biden and Sen. Bernie Sanders sought in Sunday’s Democratic debate to cast themselves as best-positioned to lead the nation through a global pandemic, uniting in their criticism of President Donald Trump’s response to the fast-moving coronavirus but diverging in how they would confront the spiraling public health and economic crisis.

Biden pledged to deploy the United States military to help with recovery efforts and warned that a federal financial bailout may be necessary to stabilize the economy. Sanders leaned into the same domestic policy proposals that have dominated his campaign, arguing that the government-run health insurance system he has long championed would allow the U.S. to respond faster to a health crisis.

The coronavirus outbreak has rapidly reshaped nearly all aspects of American life, shuttering schools across the country and significantly curtailing travel. Virus fears have also halted campaign rallies and prompted some states to delay upcoming primaries because of warnings from public health officials against large gatherings.

“This is bigger than any one of us — this calls for a national rallying for one another,” Biden said.

Indeed, the stakes in the race for the Democratic presidential nomination have shifted dramatically since Biden and Sanders last debated less than three weeks ago — as have the contours of the contest. After a sluggish start to the primary season, Biden has surged to the front of the field, drawing overwhelming support from black voters and consolidating the backing of several more moderate rivals who have dropped out of the race. He’s also actively courting the endorsement of Sen. Elizabeth Warren, a liberal ally of Sanders who dropped out without throwing her support behind him.

The former vice president appeared determined throughout Sunday’s contest to keep his focus on the general election, making direct overtures to Sanders’ loyal supporters and committing for the first time to select a woman as his running mate if he becomes the Democratic nominee. After Biden’s announcement, Sanders said he would “in all likelihood” do the same.

For Sanders, the reality is that his path to the nomination is rapidly shrinking, and he faces the prospect of more stinging defeats in the four states that vote on Tuesday. Still, he appeared determined to draw sharp contrasts with Biden throughout the debate, challenging him aggressively on the Iraq War and free trade deals. He argued that “I have taken on every special interest that’s out there,” adding, “That’s a very different record than Joe’s.”

Though Sunday’s debate was the first one-on-one contest of the Democratic primary, Biden and Sanders have been the leaders of their party’s ideological poles throughout the yearlong campaign. Their prescriptions for addressing the coronavirus outbreak highlighted the contrasting approaches they are pledging to bring to the White House.

Biden, a centrist who backed the 2008 bailout of the financial industry during the recession, warned that another government-backed rescue plan may be needed in the coming months to shore up the economy. Sanders, a fierce liberal critic of Wall Street, opposed the earlier bailout and said it would be a mistake to take a similar approach now; instead, he suggested a tax on the wealthiest Americans.

The Vermont senator also repeatedly pushed questions regarding the coronavirus toward a now-familiar debate between him and Biden over health care. Sanders argued that the troublesome shortages in coronavirus tests and anxiety over the preparedness of the nation’s health care system to deal with an impending increase in patients highlight why the U.S. should move to the government-run, “Medicare For All” system he has long championed.

“One of the reasons that we are unprepared, and have been unprepared, is we don’t have a system. We’ve got thousands of private insurance plans,” Sanders said. “That is not a system that is prepared to provide health care to all people in a good year, without the epidemic.”

Biden, who supports adding a public insurance option to the current system, argued that a pandemic was not a moment to attempt to push through an overhaul of the American health insurance system, a politically arduous endeavor.

“This is a crisis,” Biden said. “We’re at war with a virus. It has nothing to do with copays or anything.”

As the debate opened, Biden and Sanders skipped a handshake, greeting each other instead with an elbow bump. They took their positions at podiums spaced 6 feet apart in keeping with guidance from the Centers for Disease Control and Prevention for limiting the spread of the novel coronavirus. They addressed the nation, and each other, from a television studio in Washington without an in-person audience.

The pandemic has upended the campaign for days, prompting Biden and Sanders to cancel rallies and instead hold virtual events with voters around the country. Their campaign staffs are also working remotely, and the candidates — both in their late 70s — said they were taking personal precautions to guard against a virus that is a greater risk to the elderly.

The senator found himself on the defensive at several points in the night, including about favorable comments he’s made about authoritarian regimes in Cuba and other Latin American countries — remarks that could hurt Sanders in Tuesday’s key primary in Florida, a state with a large population of residents from those nations. Sanders, a self-described democratic socialist, said that while he condemns authoritarianism in Cuba and elsewhere, it’s possible to recognize positive changes made by their governments.

“To simply say that nothing ever done by any of those administrations had a positive impact on their people would, I think, be incorrect,” Sanders said.

“If I lose this thing, Joe wins, Joe, I will be there for you,” Sanders said.