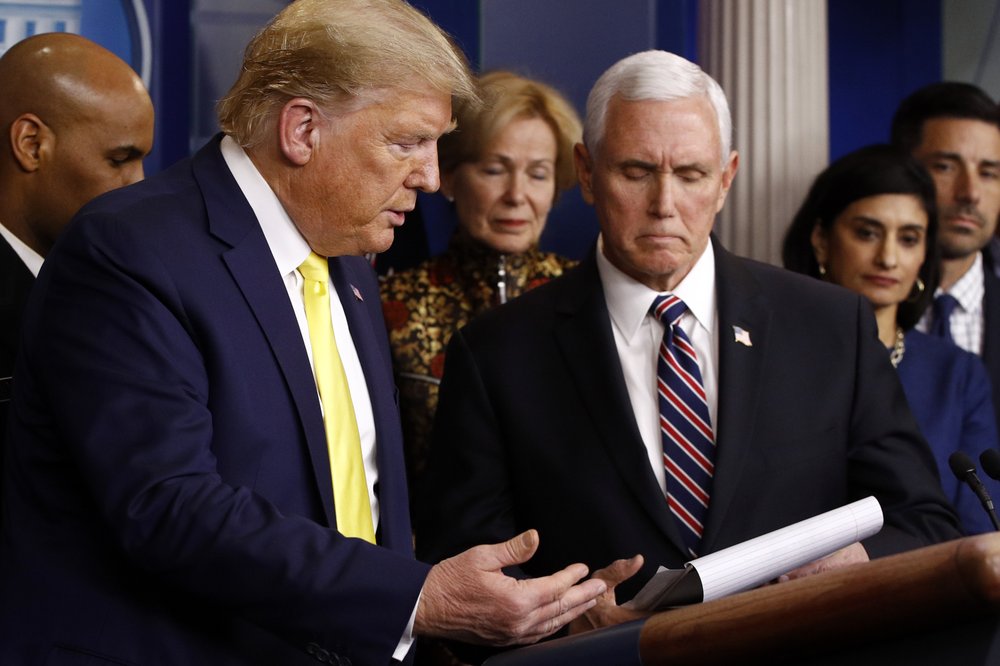 President Donald Trump gestures for Vice President Mike Pence to speaks in the briefing room of the White House in Washington, Monday, March 9, 2020, about the coronavirus outbreak. (AP Photo/Patrick Semansky)

WASHINGTON (AP) — President Donald Trump said Monday his administration will ask Congress to pass payroll tax relief and other quick measures as a public health and economic maelstrom brought on by the coronavirus drew closer to him personally.

Intending to calm the fears of financial markets over the impact of the epidemic, Trump told reporters he is seeking “very substantial relief” to the payroll tax. Trump also said he was seeking help for hourly-wage workers to ensure they’re “not going to miss a paycheck” and “don’t get penalized for something that’s not their fault.”

He stepped forward with the contours of an initiative after markets dropped sharply and as the outbreak spread. Several Trump confidants in Congress disclosed they were isolating themselves after potential exposure to the virus; one traveled with the president from Florida on Air Force One on Monday; another was his just-tapped new chief of staff.

Trump said he would hold a press conference Tuesday to outline the proposals, saying his administration and Congress would be “discussing a possible payroll tax cut or relief, substantial relief, very substantial relief, that’s big, that’s a big number. We’re also going to be talking about hourly wage earners getting help so that they can be in a position where they’re not going to ever miss a paycheck.”

As Trump grappled with an epidemic whose consequences he has repeatedly played down, the White House asserted it was conducting “business as usual.” But the day’s business was anything but normal. Lawmakers pressed for details on how the Capitol could be made secure, handshakes on the Hill were discouraged and a Pentagon meeting was broken into sub-groups to minimize the number of people in the same room.

The president himself dove into handshakes with supporters earlier in the day, when arriving to headline a fundraiser in Longwood, Florida, that raised approximately $4 million for his reelection campaign and the Republican Party.

On his flight back to Washington he was accompanied by Florida Rep. Matt Gaetz, who later went into a voluntary quarantine. He was one of several GOP lawmakers who were exposed to a person at last month’s Conservative Political Action Conference who tested positive for the virus. His office said he was “mid-flight” on Air Force One when CPAC informed his staff that he had been in contact with the attendee who had the virus.

Once the plane landed, Gaetz was immediately tested.

In Monday morning tweets, Trump vented about the market drop and news that large public gatherings were being called off because of the virus.

“At this moment there are 546 confirmed cases of CoronaVirus, with 22 deaths,” Trump tweeted, comparing it to seasonal influenza and the thousands of deaths that causes. “Think about that!”

Scientists at this stage don’t know what the death rate of the new coronavirus actually is and whether it will wind up being about the same as flu or worse.

At the same time, administration officials were insistent that they weren’t trying to dismiss public concerns. “This is a very serious health problem,” Health and Human Services Secretary Alex Azar told Fox News.

At the Pentagon, officials have begun “social distancing” measures.

On Monday, Defense Secretary Mark Esper’s regular meeting with senior staff, which normally would be held face-to-face in a single room with 40 to 50 participants, was broken up into three rooms, with video-teleconferencing among the rooms, according to the Pentagon’s chief spokesman, Jonathan Hoffman. He said Esper and the 15 to 20 people in his room, including Gen. Mark Milley, chairman of the Joint Chiefs of Staff, sat at least six feet apart, in line with health guidance.

Trump was delegating much of the virus response to Pence, who convened a video teleconference to give an update on the federal government’s virus response Monday afternoon with the nation’s governors. Trump met his top economic advisers before emerging to disclose he’ll seek the payroll tax break.

The White House has been convening meetings with an array of travel and healthcare industry representatives, and was set to host Wall Street executives at the White House on Wednesday to discuss the economic fallout of the epidemic.

Futures in the S&P 500 index, which can indicate how Wall Street will open Tuesday, were up more than 2.5% late Monday after the administration’s news conference.

On Capitol Hill, where many lawmakers are older and have frequent contact with the public, leaders were fielding questions from members and staff about how the complex will be secured. Leaders have so far shown little willingness to close the Capitol, but meetings were scheduled throughout the day to discuss preparations.

On Monday, Rep. Doug Collins, R-Ga., and Gaetz put themselves in voluntary quarantine because of their contacts with someone at the Conservative Political Action Conference.

Both said they did not have any symptoms but would wait out the remainder of the 14 days since the contact at home. Gaetz last week wore a gas mask to the House vote on the emergency funding bill for the virus response and said he wanted to highlight how Congress could become “petri dish” for the virus.

Collins had met with Trump last Tuesday night at the White House and shook hands with him Friday when the president visited the Centers for Disease Control and Prevention’s Atlanta headquarters.

Rep. Mark Meadows, R-N.C., whom Trump named Friday as his incoming chief of staff, also went into self-quarantine. “A precautionary test came back negative & he feels great,” his spokesman tweeted late Monday. Meadows has not yet resigned his congressional seat and has not yet assumed his new role at the White House, but he is a frequent visitor.

Sen. Ted Cruz, R-Texas, and Rep. Paul Gosar, R-Ariz., also placed themselves in quarantine after coming in contact with the same person at the conservative conference.

Rep. Julia Brownley, D-Calif., said she met last week with a person who has since been diagnosed with the virus. She closed her office and said she and her staff are “self-monitoring and maintaining social distancing practices.”

Vast numbers of visitors come to the Hill, especially at this time of year when advocacy groups arrange “fly-in” trips to lobby and speak to lawmakers, and school groups descend for tours.

One Republican who said he was informed he had been exposed at the conservative conference, Rep. Louie Gohmert of Texas, tweeted that he was cleared to return to Washington. He was spotted leading a Capitol tour for more than 100 visitors late Monday evening.

In one manifestation of lawmaking in the age of the coronavirus, Rep. Richard Neal, D-Mass., approached a Republican colleague on the House floor Monday for a routine congratulatory handshake after the chamber approved a bill expanding a visa program. “Shake or bump?” Neal asked Rep. Kelly Armstrong, R-N.D.

Offices on Capitol Hill also advertised they were holding “no contact meetings” and asked guests to refrain from shaking hands.

The chairman of the Democratic caucus, Rep. Hakeem Jeffries, said the House’s chief administrative officer and the sergeant at arms are expected to brief Democrats at their regular caucus meeting Tuesday. The discussion was expected to address whether the Capitol will be restricted to visitors, he said.

It was not immediately clear how Trump was aiming to provide assistance to employees weighing whether to stay home because of illness — a crucial aim of public health officials seeking to curtail the spread of the virus.

One mechanism, backed by the Trump-allied National Association of Manufacturers, involves a proposed tax credit for employers who pay employees who are quarantined.

Treasury Secretary Steve Mnuchin and Larry Kudlow, the director of the national economic council, were expected to bring the White House proposal to Senate Republicans on Tuesday afternoon, at which point officials planned to release more publicly.

Lawmakers on Capitol Hill had barely started to contemplate the economic implications of the spread of the virus and what might be needed to stimulate the economy as people cancel vacations and business trips and stay away from stores. Senate Finance Committee Chairman Chuck Grassley told reporters that “everything’s on the table.”

But members of the Senate Republican leadership, including Texas Sen. John Cornyn played down the need for an economic stimulus package of any kind, be it tax cuts or aid for workers. “It’s premature to be talking about that,” Cornyn told reporters. “I usually love tax cuts but I think it’s a little premature.”

Democrats panned — for now — Trump’s proposed payroll tax cut. They said it was not specific enough to the core problem and are preparing their own package of aid, including affordable testing, unemployment benefits and paid leave for working families affected by the virus.

“Unfortunately at the president’s press conference today, he really did not address the coronavirus issue,” said House Speaker Nancy Pelosi, standing alongside Senate Democratic Leader Chuck Schumer after a late meeting at the Capitol. “This is about the kitchen table of America’s working families.”

A House vote could come as soon as this week, Pelosi said, but more likely would shift to April.

While they did not completely oppose Trump’s proposed payroll tax cut, they said they prefer their approach as a better way to instill confidence in families and the economy.

“Unless you deal with the pandemic the stock market’s going to keep getting worse and worse and worse,” Schumer said. “If there’s going to be relief it ought to be aimed at the families that are most affected.”

A day after saying it was “proceeding as normal,” Trump’s campaign canceled a three-day Women for Trump bus tour across Michigan that included Mercedes Schlapp, the former White House aide who is married to the American Conservative Union chairman, Matt Schlapp.

Schlapp is under self-quarantine after after he, too, was exposed to the infected person at CPAC. He introduced Trump and greeted him with a handshake on stage before the president’s spoke on Feb. 29.