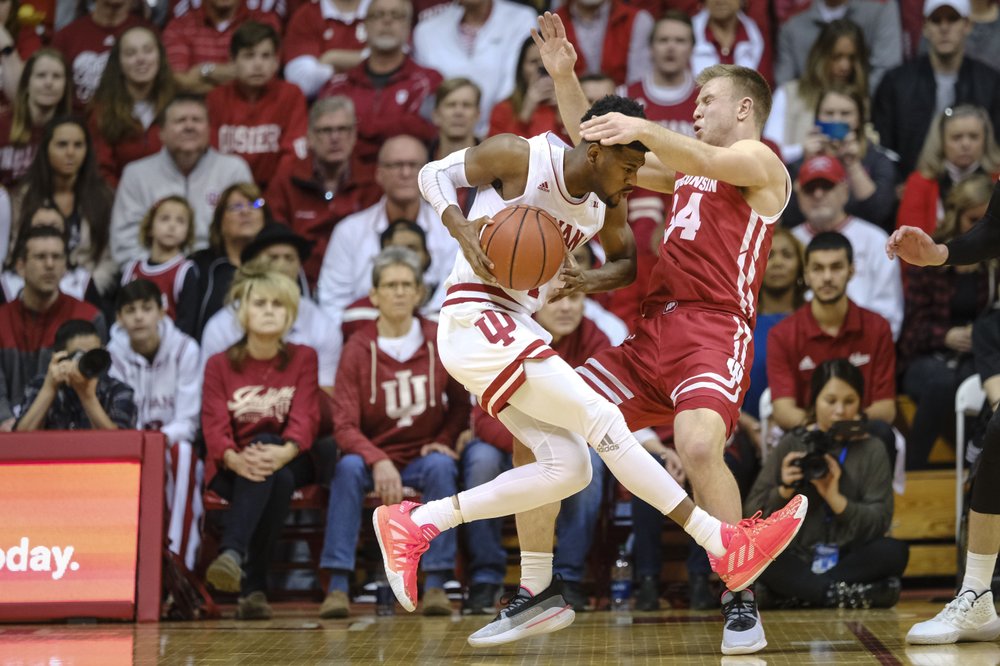 No. 24 Badgers clinch share of Big 10 title, beat Indiana
By MICHAEL MAROT
an hour ago

BLOOMINGTON, Ind. (AP) — Brad Davison and a bunch of Wisconsin players jumped around as the buzzer sounded Saturday, celebrating the end of a five-year Big Ten title drought.

They just wished assistant coach Howard Moore could have been there with them.

Ten months after an automobile accident killed his wife, Jen, and 9-year-old daughter, Jaidyn, and left him with severe burns, Moore was first and foremost in the team’s thoughts after No. 24 Wisconsin beat Indiana 60-56.

“This whole period, this whole year we’ve been thinking about him,” Davison said. “Not a day goes by that we don’t think about him, and obviously this season was dedicated to him. So to go out like this with a regular-season Big Ten championship is crazy.”

Moore’s 13-year-old son, Jerell, suffered minor injuries in the crash that also killed the wrong-way driver who ran into the family’s vehicle. In July, Howard Moore suffered a heart attack and the players haven’t seen him since last summer.

The Badgers assured themselves at least a share of the Big Ten title. Losses by ninth-ranked Maryland and No. 15 Michigan State on Sunday would give Wisconsin the outright title.

“As soon as I can, I am going to take that trophy over to see Howard and let him rub it, and kiss it, and hold it,” coach Greg Gard said. “I cannot be prouder of these three guys that have been through hell and back in the last nine months that we had to face as a team and personally. They’ve stuck together. They’ve been phenomenal. I do not even have words to describe how good they have been.”

All season, Wisconsin players have worn warmup shirts with “4 Moore” on the back. Gard took note of that after this win.

“How ironic that the final difference is four points?” Gard said.

The Badgers’ achievement this season included a months-long battle with the NCAA over Micah Potter’s eligibility and an uncharacteristic 5-5 start.

Davison’s tiebreaking 3-pointer with 4:05 left gave Wisconsin the lead for good. The Badgers excelled on the other end of the floor, too, holding Indiana to one basket in the final 10 minutes.

Nate Reuvers finished with 17 points and Potter added 14 points and 11 rebounds. Davison made two free throws with 7.1 seconds to seal the win and had 11 points.

Instead, the Badgers scored 12 straight, forced 12 straight errant shots and never trailed after Davison’s 3. Devonte Green scored all 16 of his points in the first half to lead the Hoosiers.

“They did a great job of being able to claw and hang, and then I thought their front court really finished us off,” Indiana coach Archie Miller said.

Gard found the closing chapter to be fitting.

“That last seven minutes was kind of a microcosm of what we’ve gone through, to fight uphill and find a way to battle back,” he said. “This has been unbelievable — the guts, the heart, the toughness of this group, how they’ve matured. They didn’t have it in November. They have it in March.”

Wisconsin: The Badgers didn’t follow the traditional script. But they dug down late, found a way to continue their recent dominance in the Indiana series and now head into the conference tournament with momentum and confidence.

Indiana: The Hoosiers may have done enough already to make the NCAA Tournament. But a win over another ranked team might have assured them of a spot in the 68-team field. Instead, Miller must wait a few more days to see if he can record his first 20-win season at Indiana.

Wisconsin: D’Mitrik Trice missed his first six shots and was shut out in the first half but still managed to finish with four points to become the first junior in school history with 1,000 points, 300 assists and 300 steals. He also had five assists and five rebounds. …Reuvers also had seven rebounds. … Aleem Ford had 12 points.

Indiana: Green got a rare start on senior day and made five of his first eight shots. He finished 6 of 17, going 3 of 8 on 3s. … Race Thompson had seven points and 11 rebounds. … Aljami Durham had nine points and Justin Smith had seven.

Wisconsin: Will make another trip to Indiana for Friday’s quarterfinal round game in the Big Ten Tournament.

Indiana: Must wait for Sunday’s conference games to finish before determining which team and when they will play in the Big Ten tourney at Indianapolis.