US considers more water recycling — including from oilfields 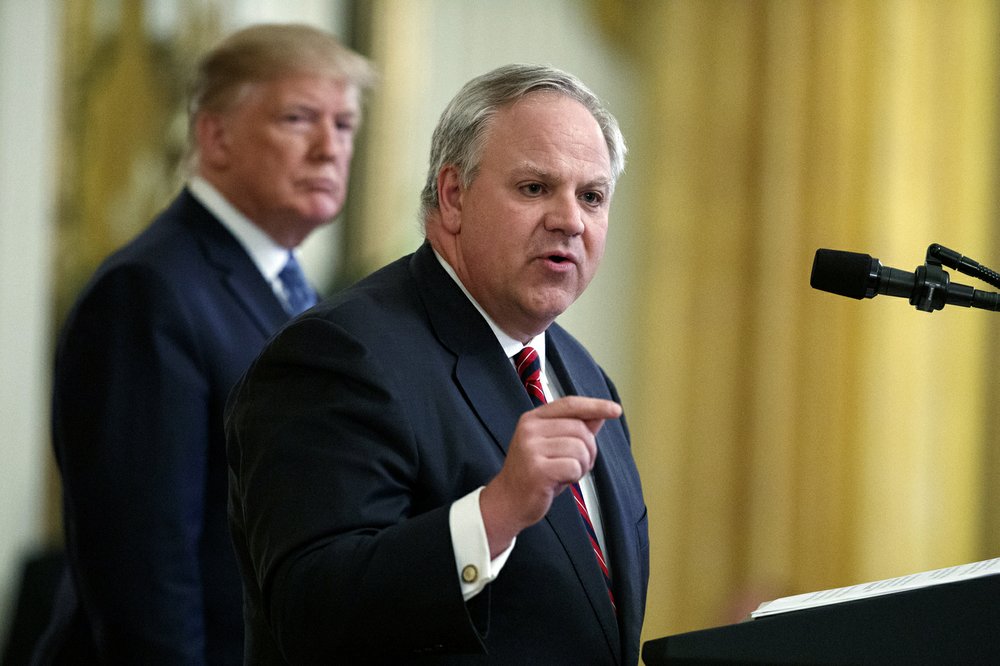 FILE - In this July 8, 2019, file photo President Donald Trump listens as Interior Secretary David Bernhardt speaks during an event on the environment in the East Room of the White House in Washington. The Trump administration moved Thursday on a water-recycling push it says could get good use out of more of the wastewater that industries, cities and farms spew out, including the billions of barrels of watery waste generated by oil and gas fields each year. (AP Photo/Evan Vucci, File)

WASHINGTON (AP) — The Trump administration moved Thursday on a water-recycling push it says could get good use out of more of the wastewater that industries, cities and farms spew out, including the billions of barrels of watery waste generated by oil and gas fields each year.

Some environmental groups eye the effort suspiciously, fearing the Trump administration will use the project to allow businesses to offload hazardous wastewater in ways that threaten drinking water sources and otherwise risk public health. Businesses including oil and gas developers have urged the Trump administration to allow them more ways to get rid of their increasing volumes of wastewater.

Interior Secretary David Bernhardt, Agriculture Secretary Sonny Perdue and Environmental Protection Agency administrator Andrew Wheeler were on hand for the launch of what they called an action plan for water reuse nationwide. President Donald Trump — who has pushed to make work easier for oil and gas developers and direct more water to farmers — triggered the effort in a 2018 memo.

The effort “frames the business case that water reuse is a viable and growing means of supporting our economy and improving the availability of freshwater,” the EPA said in a statement Thursday.

Short on details, the plan sketches out state, federal and tribal and local efforts looking at the policies, rules, research and possible uses in reclaiming and using more stormwater, rainfall and wastewater left over from farms, factories and coolant systems, wastewater plants, and oil and gas production.

It includes finishing a study that will support consideration of “potential regulatory and nonregulatory approaches” to reusing oilfield wastewater by April, the EPA said.

Uses for some of the wastewater overall could include watering crops, treating it for use as drinking water, and refilling underground water aquifers being drained by heavy pumping, the plan says.

“Wastewater from the fracking process is certainly at the top of our minds,” Wheeler said, in looking to boost reuse of what industry calls produced water.

Drinking water standards and other laws and rules limit the ways that farms, cities and oil and gas developers, among others, can get rid of their wastewater. The fluids are often tainted with brine, chemicals, metals or other byproducts.

The industry practice of pumping oilfield wastewater back underground has raised fears of contamination of drinking-water reserves in some states. In Oklahoma, the Oklahoma Geological Survey and other scientists earlier in the decade linked a surge in earthquakes with the 1.5 billion barrels of wastewater that the oil and gas industry was disposing of by pumping back underground.

In California, initial projects watering orchards and some other crops with water that includes oilfield wastewater.

“The Trump administration is trying to prop up the oil and gas industry by greenlighting more ways to dump vast amounts of waste fluid that’s often toxic and even radioactive,” said Hollin Kretzmann, an attorney with the Center for Biological Diversity.