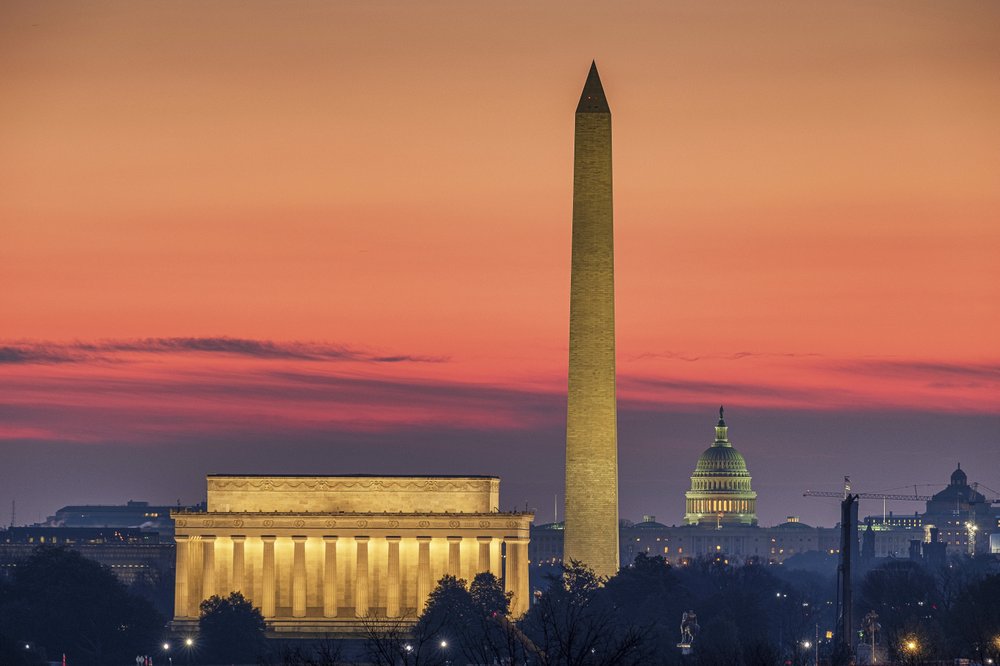 FILE - In this Feb. 17, 2020, file photo, the Lincoln Memorial, left, and the Washington Monument, center, are seen in the early morning light in Washington. The U.S. Capitol building is in the background right. For a majority of Democratic voters, going back to the days before Donald Trump isn’t good enough. (AP Photo/J. David Ake, File)

WASHINGTON (AP) — Democrats’ desire for dramatic political change has emerged as a driving force in the party’s presidential primary battle, one that extends beyond the progressive wing and presents challenges for candidates running on promises of moderation.

In Iowa, New Hampshire and Nevada, the first three states to weigh in, voters have elevated the candidate promising the biggest departure from the politics of the past — not necessarily the clearest path to defeating President Donald Trump or a restoration of the Obama era. After fighting to a draw in Iowa, Vermont Sen. Bernie Sanders, who bills himself as the leader of a revolution, bested candidates in New Hampshire and Nevada promising a restoration of the pre-Trump era and those who focus mainly on their electability.

To be sure, the results reflect the choices of a narrow slice of Democratic voters, a group well to the left of the electorate that will decide the presidency in November. Meanwhile, Sanders has no doubt benefited from a crowded contest where moderates are splitting their support, preventing a single candidate from emerging as the top centrist alternative.

But Sanders’ commanding win in Nevada’s caucuses last Saturday — he trounced all of his rivals — suggests the fractured race isn’t the moderates’ only problem: The senator’s promise to upend the American political system is resonating beyond liberals, and the desire for fundamental change is coming from even moderate and conservative Democrats.

More analysts attribute this to an increasing polarization in politics.

“After four years of Donald Trump, the American people are hungry for change,” said Democratic strategist Rebecca Katz. “The Democratic electorate is split on the best way and the best person to get it done.”

In Iowa and New Hampshire, the first two states to weigh in, nearly two-thirds of all Democratic voters said they wanted a candidate who will bring drastic change to Washington, rather than restore the pre-Trump era, according to AP VoteCast, a wide-ranging survey of thousands of voters in both states. That included about 60% of Democrats in either state who identified as moderate or conservative.

That “big change” coalition is clear in national surveys, too. In October, a majority of voters planning to vote in a Democratic primary said they’d prefer a candidate who would take a new and different approach to one who would build on former President Barack Obama’s legacy, according to a poll from NBC News/Wall Street Journal.

“If the country had been the way that it needed to be in the first place, Trump never would’ve gotten elected,” said Linda Jones, a 50-year-old coordinator for teachers’ union and an enthusiastic Sanders backer in Nevada.

She added, “There’s no point trying to put it in the pre-Trump era. You need to make fundamental changes. Trump didn’t cause climate change.”

Jones’ view has been a headwind for former Vice President Joe Biden, the candidate unabashedly running on a promise to return to an earlier era. Asked Sunday why he was running, Biden said he wanted to “restore some dignity to the office.”

There’s no doubt voters are trying to reconcile their desire for drastic change with the hunger to beat Trump. Majorities in Iowa and New Hampshire agreed a candidate with strongly liberal views would have difficulty against Trump in November, according to AP VoteCast surveys.

In Iowa and New Hampshire, that message won over some Democrats who say they would rather go back to a pre-Trump era instead of seeking structural change. But those voters divided their support among multiple candidates in those states, including Biden, Minnesota Sen. Amy Klobuchar and former South Bend, Indiana, Mayor Pete Buttigieg.

In Nevada, Klobuchar’s support plummeted, while Biden’s distant second-place finish was his best yet. Former New York Mayor Mike Bloomberg, another candidate running on electability and stabilizing, rather than transforming Washington, did not compete in those states.

The voters itching for change in many ways line up with Sanders’ coalition. In Iowa and New Hampshire, more than 80% of voters under age 30 wanted a candidate who would transform Washington. About half of young voters in both states backed 78-year-old Sanders.

But AP VoteCast surveys in the first two states suggest Sanders isn’t the only beneficiary of the hunger for something new. Buttigieg and Massachusetts Sen. Elizabeth Warren both performed well with voters seeking dramatic change, presumably for different reasons.

While some voters are focused on enacting new, big policies — universal health care or major new wealth taxes such as those championed by Sanders and Warren. Others see change as a matter of passing the leadership baton to a younger generation — Buttigieg is 38 — and want to move past old partisan battles.

“I don’t want to keep seeing us go back and forth between Democrat-Republican, Democrat-Republican,” said Veronica Gerhard, a 30-year-old Buttigieg supporter. Gerhard would like to see big changes in the country, but not at the revolutionary pace Sanders wants them to come. She worries that sort of upheaval would only lead to the pendulum swinging back in favor of another president like Trump.

“I want us to pave a path where we can start to work together and start to actually make a change in that sense, have Republicans and Democrats unite.”

Amber Baumann, a 38-year-old adult educator, said she’d like to see the United States remade into a nation with stronger social safety nets, as well as more funding for schools and health care. But she also hopes to defeat Trump.

“I want fundamental change. I would settle for restoration,” she said. “I will take what I can get at this point.”

She cast her vote for Sanders at a Las Vegas early voting site, while putting Warren and Buttigieg in the No. 2 and 3 positions on her ballot.