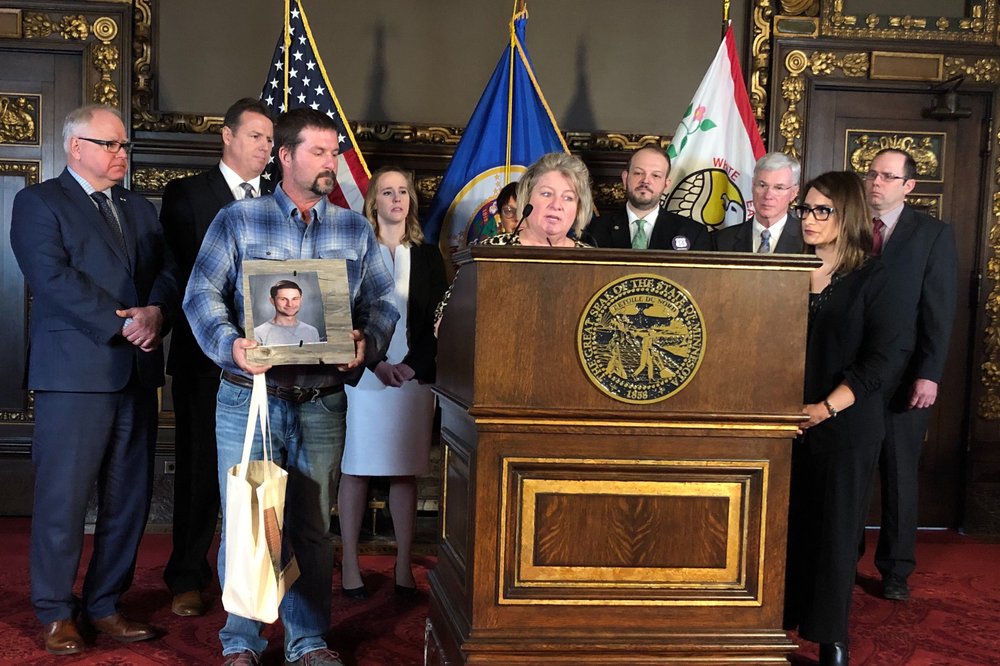 Michele Gran, who calls herself a "momma on a mission," speaks at a news conference at the state Capitol in St. Paul, Minnesota on Tuesday, Feb. 25, 2020, in support of a farm safety funding proposal by Gov. Tim Walz, far left. Standing next to her is her husband, David Gran, who held a picture of their son, Landon Gran, who was 18 when he died in a grain bin accident on their farm near St. Peter last August. (AP Photo/Steve Karnowski)

The governor was joined at a news conference by Michele Gran, whose 18-year-old son, Landon, was killed in a grain bin accident on their farm near St. Peter last August. She has since channeled her grief into a campaign for farm safety, including a pair of bills dubbed Landon’s Law that are making their way through the Legislature.

“I’m a momma on a mission,” Gran told reporters as she fought back tears. “I don’t want to stop here in Minnesota. I want Minnesota to be the leader.”

Standing next to her husband, David, who held a picture of their son, Michele Gran said that within a couple days of Landon’s death, “I was on the phone with TV stations, newspapers, the White House. I emailed just about anybody that I could think might that might listed, because our son’s death was preventable.”

Farming is one of the most dangerous professions in the U.S. At least 10 people have died in farming-related accidents in Minnesota since last June, mostly in grain bin accidents. According to the National Institute for Occupational Safety and Health, 416 farmers and farm-workers died from work-related injuries in 2017. Transportation accidents, including tractor rollovers, were the leading cause of deaths nationally.

The governor proposed $250,000 in additional funding, but the figure is just a placeholder for now and he said he’d welcome spending more. Walz added that he’d sign Landon’s Law if the legislation reaches his desk. He plans to release his supplemental budget proposal around March 10.

The bills, by Sen. Nick Frentz of North Mankato and Rep. Jeff Brand of St. Peter, would provide $500,000 for grain bin safety and $250,000 for farmer education. The Democratic proposals have bipartisan support, and no opposition has emerged, with major agriculture groups including Farm Bureau, Farmers Union and the Minnesota Corn Growers Association supporting it.

While it’s not a lot of money compared with a state budget of more than $48 billion, the Democratic governor said it could go a long way because the equipment modifications are often cheap.

“They’re really simple, inexpensive fixes than can do a lot of good,” said Andrea Vaubel, the state’s deputy agriculture commissioner.

Michele Gran provided emotional testimony at two hearings last week, and the legislation has already passed one Senate committee. At Tuesday’s news conference, she again recounted how Landon was working in a grain bin on their farm when he became caught in an auger.

“He was alone for hours, in an empty grain bin, dying alone,” Gran said, adding that “I believe (the proposals are) so necessary for other families, so they do not have to suffer this excruciating pain of loss of a family member,” she said.