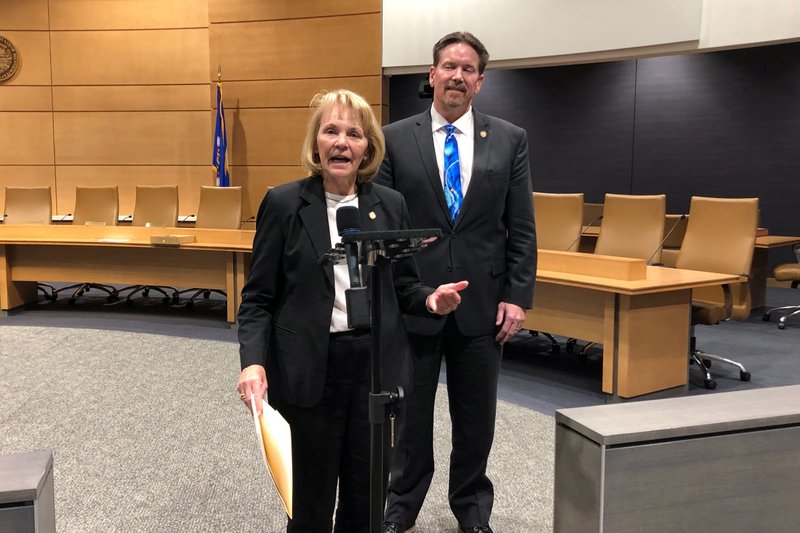 state Sen. Mary Kiffmeyer, R-Big Lake, and Sen. Mark Koran, R-North Branch, appear at a news conference, Tuesday, Feb. 18, 2020, at the Minnesota Senate Building in St. Paul, Minn. They appeared in support of Kiffmeyer's bill to tie legislative authorization for the secretary of state to spend a new round of federal election security money to passing her proposal for a provisional balloting system that Democrats warn could suppress turnout. (AP Photo/Steve Karnowski)

ST. PAUL, Minn. (AP) — A Senate Republican, who held up federal election security funding for most of the 2019 legislative session, moved Tuesday to tie approval of a new round of money to passing her proposal for a provisional balloting system that many warn could suppress voter turnout.

Sen. Mary Kiffmeyer, of Big Lake, who chairs the Senate’s elections committee, wants to require that the ballots of citizens who register at the polls on election day be designated as provisional ballots that aren’t counted until their eligibility can be verified. Currently, ballots of Minnesotans who register at the polls are counted along with all the other votes. The committee approved her bill on a 6-3 party-line vote and sent it to its next committee stop.

Instead of separating the two issues, Kiffmeyer’s bill would also give Secretary of State Steve Simon the legislative approval he needs to spend $7.4 million in federal election security money that the Trump administration allocated to Minnesota late last year.

Minnesota got $6.6 million for cybersecurity upgrades in an earlier round. But Kiffmeyer stalled approval of that money in the Republican-controlled Senate until the end of the 2019 session for reasons that Simon told a House committee last week said remain unclear.

At a news conference ahead of the hearing, Kiffmeyer, a former secretary of state, framed the issue as one of equal treatment of voters. She pointed out that applications from residents who pre-register undergo more verification before voting than people who register at the polls, which isn’t true.

“I don’t understand why anybody would be opposed to equal treatment of voters,” Kiffmeyer said.

At a separate news conference, Gov. Tim Walz criticized Kiffmeyer for tying the federal money to provisional ballots, saying no other state requires legislative approval for spending the federal security funds. He said it’s “unfortunate” that the money has become an issue again.

Freeing the money “should be the simplest thing we do,” Walz said.

The percentage of voters registering on election day varies, but was 11.9% in the presidential election year of 2016 and 8.2% for the midterm elections in 2018.

Supporters of Minnesota’s system say there’s no evidence that the state has a significant problem with voter fraud, but that same-day registration boosts turnout by making it easy for eligible citizens to vote. They include Simon, who said Minnesota has had same-day registration since 1974 and that the system already contains sufficient safeguards.

“Eliminating same-day voter registration as we know it today and exchanging it for provisional balloting will have a detrimental effect on voter participation in Minnesota,” Simon said in a letter to members of Kiffmeyer’s committee. “Minnesotans expect us to protect their right to vote, not put it at risk.”

Kiffmeyer told reporters that election security is “so much more” than just computer security. “Security in this regard includes provisional ballots,” she said.