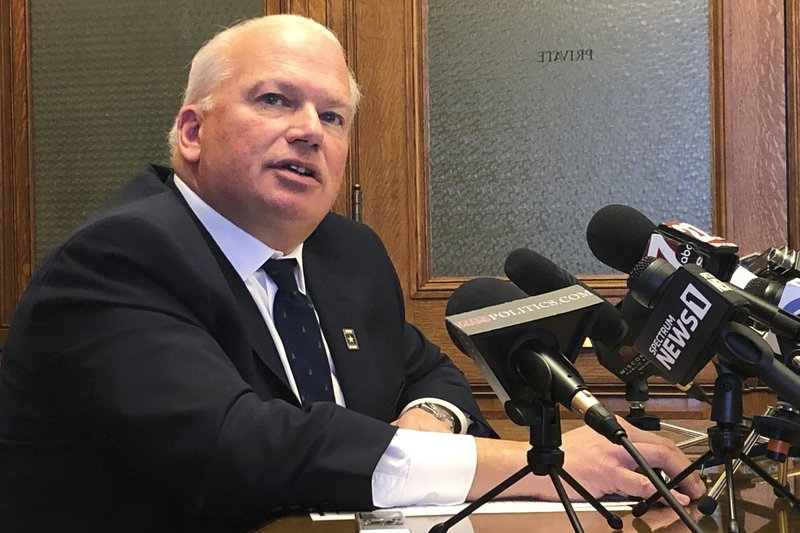 FILE - In this Dec. 30 2019 file photo, Wisconsin Republican Senate Majority Leader Scott Fitzgerald speaks in Madison, Wis. Extending bar hours in Wisconsin until 4 a.m. for the week of the Democratic National Convention appears to be in jeopardy. Fitzgerald said Wednesday, Feb. 19, 2020, that concerns about negative impacts including more drunken drivers on the road has dampened enthusiasm for the move. The Assembly is scheduled to pass the bill on Thursday, its last session day of the year. (AP Photo/Scott Bauer, File)

MADISON, Wis. (AP) — Extending bar hours in Wisconsin until 4 a.m. for the week of the Democratic National Convention appears to be in jeopardy, with a Republican leader saying Wednesday that concerns about negative impacts including more drunken drivers on the road has dampened enthusiasm for the move.

The bill allowing for longer bar hours during the four nights of the convention passed an Assembly committee with bipartisan support last week. The full Assembly is scheduled to pass it on Thursday, its last session day of the year. That would put the focus on the Senate, which was not scheduled to vote on it Wednesday and is meeting just one more time in March for the year.

“It’s lost a little bit of steam from where it was initially,” Fitzgerald told reporters Wednesday.

Fitzgerald said he was concerned about the possibility of someone driving drunk during the later hours and getting into a wreck and the fact that strip clubs could also be able to stay open until 4 a.m. There were also questions about why bar hours would be extended for the Democratic convention and not other events, he said.

“It doesn’t have nearly the momentum it had a month ago,” he said.

Senate Democrats tried to force a vote on expanding the bar hours Wednesday, but Republicans didn’t allow it. Democrats argued there was nothing wrong with allowing bars to be open later to accommodate people who may not be able to return to hotels far from the downtown Milwaukee convention site until late at night.

“You want to know that the bar is going to be open when you get there,” said Democratic Sen. Jon Erpenbach, who represents a district outside of Madison. “And there’s absolutely nothing wrong with that.”

Republican Sen. Van Wanggaard, a retired police officer, said he couldn’t support it because he said there was an increased risk of more drunken drivers on the road.

Expanding the hours had support from groups representing the state’s bars, restaurants and tourism industries who are preparing for an influx of 50,000 visits for the July 13-16 convention. In 2016, Ohio and Pennsylvania also allowed for later bar hours when the national conventions went to their states.

The proposal originally would have allowed only bars in and around Milwaukee where the convention is being held to stay open later, but it was expanded to apply to venues statewide. Local governments would have to sign off on the later hours.

Bars currently must close at 2 a.m. on weekdays and 2:30 a.m. on Saturdays and Sundays.