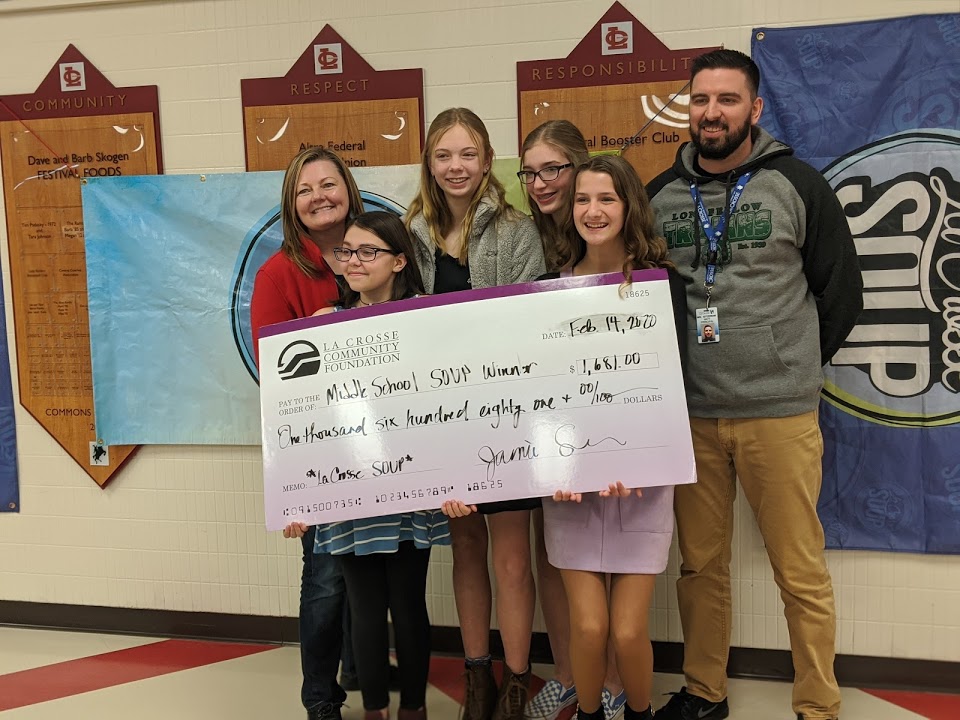 Coming forward with ideas to improve their schools and the community, three La Crosse middle school groups stood before peers, faculty, and family to present creative projects designed to make La Crosse an even better place to live.

The competition was part of the citywide middle school SOUP held Friday at Central High School. SOUP is a micro-granting dinner that supports projects in La Crosse. For a donation of $5, attendees receive soup, bread, and a vote. Each presenter has four minutes to share an idea. Then, the audience is allowed to ask four questions before voting to select the winning project that receives all of the money raised to carry out the project. The event raised $788 for the winning proposal in addition to $393 dollars raised and donated by Root Down Yoga and $500 from the La Crosse Community Foundation and the La Crosse Public Education Foundation to fund their projects.

The winning entry at the citywide middle school SOUP came from La Crosse Longfellow Middle School: “End Period Poverty.” The group of seventh-grade girls included Moxi Brown, Lilli Bye, Ella Madsen, and Sophie Zielke. They said one out of every 10 girls in the United States does not come to school because of a lack of feminine products. The goal was to remove the stigma around period and to have fully stocked, free tampon and pad dispensers in all five girls’ bathrooms at their middle school.

“Right now, we just have bins that sit on the floor and nobody uses them or people vandalize them,” Madsen said. “So many kids in our school need them.”

Now granted $1,681 in funds, the young women will get to work installing period dispensers.

“If we have any leftover money, then we will get products,” Madsen said. “Hopefully, we can find more funding to get these in every middle school girls’ bathroom.”

With help from their teacher, Jeanne Halderson, they found sponsors in the community to make the program sustainable and expand its reach. Halderson gave the girls full credit for their work noting that they called every middle and high school in the district to find out how many bathrooms there were and how many had feminine products available for students. Additionally, they called women’s organizations in the area to find funding.

“These are just four girls that recognize that there was a problem at our school and they knew how to solve it,” Halderson said. “If you can imagine yourself at 12- and 13-years-old talking about periods and tampons and pads, these girls are amazing young women. They went to present in front of all of these adults here about something that many girls would be really embarrassed to talk about. I have so much pride for them, and they did an amazing job.”

Although the topic targets female students, Halderson felt the entire student body at Longfellow came together to support the idea.

“It made everybody feel like they were a part of something,” Halderson said.

Three young men from La Crosse Lincoln Middle School wanted to establish a Black Student Unity to serve as a student organization focusing on issues related to being a person of color in the United States. The group’s goal was to give students who identify as black a place to discuss their common experience as well as celebrate their heritage and plan educational pursuits.

La Crosse Logan Middle School students pushed Painting for Pride. The effort would be to improve the atmosphere of the bathrooms at their school to make it more welcoming for students and visitors. Students would add warm colors to the bathrooms as well as inspirational quotes to help improve self-esteem. With any additional funding, the group would also purchase storage containers, benches, cabinets, or shelves for all bathrooms so students and guests have a place to put items rather than on the floor.