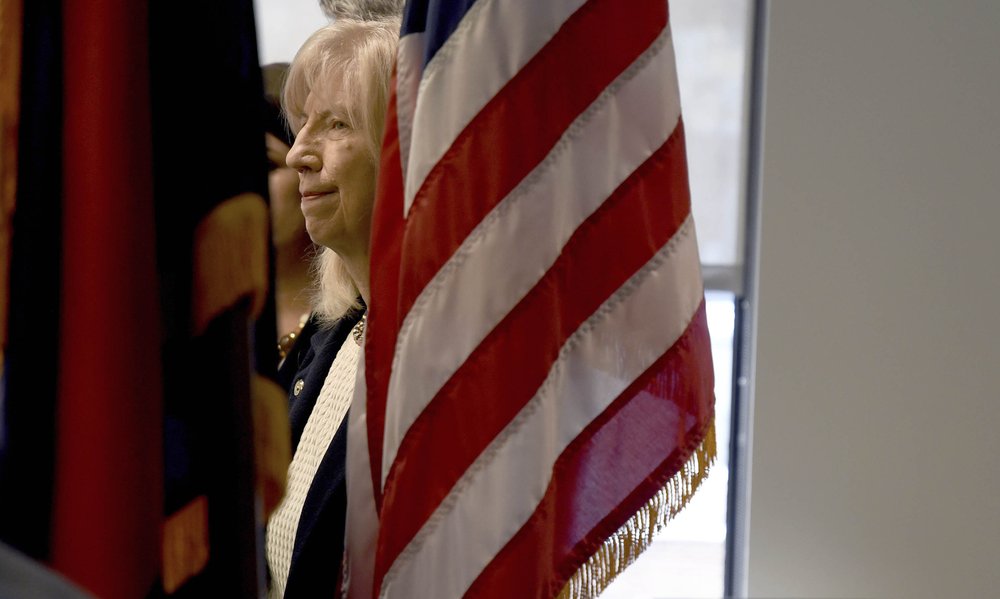 Former Interior Secretary Gale Norton listens during a news conference in Denver on Monday, Feb. 10, 2020, a day before the Trump administration hosts the first of two hearings on a proposal to roll back a landmark environmental law. Norton says the National Environmental Policy Act, signed by President Richard Nixon in 1970, needs to be modernized to make the permitting process for infrastructure projects quicker. Along with the Clean Air Act and the Clean Water Act, NEPA spells out the nation's principal environmental protections. (AP Photo/Thomas Peipert)

DENVER (AP) — The Trump administration on Tuesday hosts the first of two hearings on a proposal to roll back a landmark environmental law, and activists say the abbreviated schedule is limiting the very public input that’s long been guaranteed by the 50-year-old law itself.

Tickets to speak at the Denver hearing of the president’s Council on Environmental Quality on the proposal were snapped up in minutes. So, too, were speaking slots for a second hearing in Washington, D.C., on Feb. 25.

Officials added speaking sessions at both hearings to accommodate demand.

President Donald Trump on Jan. 9 proposed narrowing the scope of the National Environmental Policy Act, signed by President Richard Nixon in 1970. Along with the Clean Air Act and Clean Water Act, it spells out the nation’s principal environmental protections.

NEPA requires federal agencies to determine if a construction or commercial project would harm the environment or wildlife. It gives the public the right of review and input.

Trump, backed by the U.S. Chamber of Commerce, American Petroleum Institute and other business and trade groups, says the law’s reviews delay infrastructure projects for years and dramatically boost their costs.

Among other changes, the proposal would streamline environmental assessments, set time limits for them, and declare that NEPA doesn’t require “analysis of cumulative effects,” which environmentalists say would include the study of a project’s potential impact on climate change.

It also would spare some privately funded and managed projects from federal environmental study and public review.

Citing the time it often can take to get a road permit, Trump declared last month that NEPA, in its current form, is “big government at its absolute worst, and other countries look at us and they can’t believe it.”

Reaction to the proposal — and to a 60-day public comment period that expires March 10 was swift. Environmentalists want more opportunities for the public to have a say.

“NEPA has done more than any other law in the last 50 years to protect America’s lands and wildlife and ensure public comment,” said Aaron Weiss, deputy director of the Center for Western Priorities.

“It’s completely on brand that the Trump administration is cutting the American public out of the process,” Weiss said.

“NEPA forces federal agencies to review and disclose the impacts of their actions, it forces them to consider reasonable alternatives, and it involves the public in their decision-making,” said Erik Schlenker-Goodrich, executive director of the Western Environmental Law Center.

Activists planned a rally, a “people’s hearing” and other events outside Tuesday’s hearing at the regional headquarters of the Environmental Protection Agency.

“To have only two hearings in the entire United States on a national environmental law, it really speaks volumes about what we see as the anti-public sentiment behind these rollbacks,” said Jeremy Nichols, director of climate and energy at WildEarth Guardians.

The Council on Environmental Quality is accepting public comment on its “ NEPA Modernization ” site.

Backers of the proposed changes called NEPA outdated and a deterrent to infrastructure investment at a Monday news conference. They also insisted the changes won’t eliminate environmental reviews.

“We have a lot of private sector dollars that are sitting on the sidelines that is waiting to invest in U.S. infrastructure. But when it takes between four and 20 years to get a permit, a lot of those dollars go away,” said Ed Mortimer, vice president of transportation and infrastructure for the U.S. Chamber of Commerce.