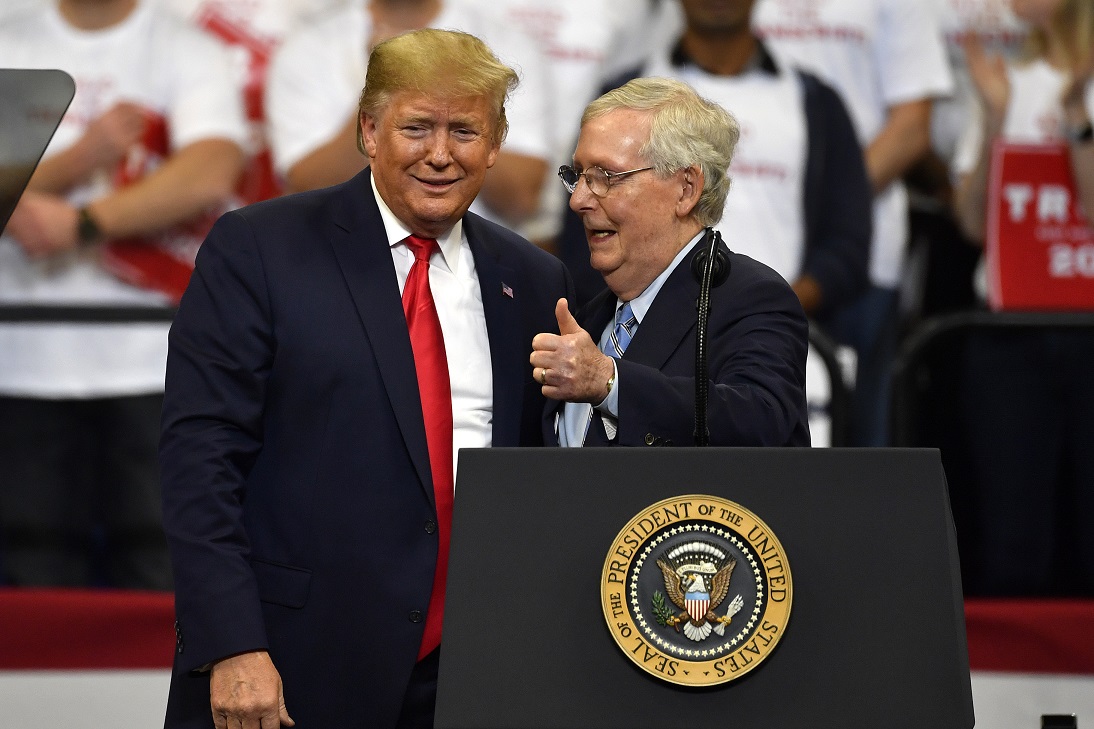 WASHINGTON (AP) — Long before Donald Trump’s impeachment landed in the Senate, Majority Leader Mitch McConnell had one piece of advice for the president: Focus on the House.

Gin it up. Use maximum effort. Make sure Republicans are united. And leave the Senate to him.

The 77-year-old Republican leader, who has been in the Senate since 1985, encouraged the president not to turn attention on wayward GOP senators, like Mitt Romney, who were “troubled’’ by Trump’s actions toward Ukraine, but to stir the partisan passions of the House.

It was the GOP leader’s central strategy to produce as partisan an impeachment as possible — too polarizing for any centrists to touch — to secure Republican acquittal in the Senate.

“He understood right from the start, this was crooked politics,” said Trump, singling McConnell out for praise Thursday at the White House. “You did a fantastic job.”

In the aftermath of only the third presidential impeachment trial in U.S. history, McConnell’s power over the Senate is now without doubt. His approach reflects the times of the Trump era, but also is shaping them.

Even before the senators even took the oath to uphold “impartial justice,” it was all but over. The Senate would have nowhere near the two-thirds majority needed to convict the president. McConnell announced he was not an impartial juror, but one working closely with the White House, and few strayed from his plan for speedy acquittal.

The Kentucky Republican may be less “Master of the Senate,” as historian Robert Caro indelibly labeled Lyndon B. Johnson, than master of a Senate that is being transformed in the age of Trump.

McConnell’s political brand centers on being an institutionalist, a keeper of traditions of the Senate he yearned to join since young adulthood. Yet in leading the majority, he is breaking old norms, introducing new ones and capitalizing on Trump’s hold over the party.

Much like the way he rewrote the Senate rules to ensure confirmation of Neil Gorsuch and Brett Kavanaugh to the Supreme Court on largely party-line votes, McConnell became the architect of a presidential impeachment trial that drifted from precedent. It was first without new witnesses or Senate deliberations, a shift for the chamber long heralded as the world’s greatest deliberative body.

Far from preserving the Senate’s historic role, McConnell is demonstrably changing it.

“Mitch McConnell, from the beginning, sided with the president in conceiving the entire impeachment process as illegitimate,” said Timothy Naftali, a clinical professor of history at New York University, and co-author of a book on impeachment.

The Senate is often referred to as a cooling saucer, tempering the House heat. McConnell drew on that tradition to impress on senators their historic role in cooling the House’s partisan passions.

“House Democrats may have descended into pure factionalism, but the United States Senate must not,” he said on the eve of the trial.

“The Senate was designed to stabilize our institutions. To break partisan fevers. To stop short-term passions from destroying our long-term future,” McConnell told them.

After McConnell encouraged the president to fire-up partisan fervor in the House to ensure a party-line impeachment vote in December, the Senate followed suit, delivering the first party-line presidential acquittal in the nation’s history.

“The passions that he should have been cooling in the Senate were the Republican partisan passions of the House,” Naftali said.

Romney was the only Republican to cross party lines to convict.

Ahead of the trial, Senate Democratic Leader Chuck Schumer said he tried three times to engage McConnell on terms before the House’s articles of impeachment were transmitted to the Senate. But he says he was rebuffed.

“I said, Mitch, whenever your’re ready, I want to sit down and talk,” Schumer told The Associated Press. “I got no bites.”

When McConnell presented GOP senators with his own plan for organizing the trial, he found little dissent. He had been discussing it privately with them for months. The main objection was his proposed 12-hour sessions, so a hand-scribbled change allowed for shorter days. It was an easy fix.

By the time the trial was ready to begin, “He’s already finished,” said Josh Holmes, a former McConnell aide. “It’s the hallmark of his career.”

It wasn’t all McConnell’s doing that brought Republicans in line. Trump maintains an extraordinary hold on his party. And Democrats own partisan passions against the president made it easier for Republicans to defend him.

The House approved the articles of impeachment in December on Speaker Nancy Pelosi’s disciplined timeline, resulting in in the quickest, most partisan impeachment vote in history.

Once the trial began, GOP senators soured on the first day when Schumer protested McConnell’s refusal to allow more witnesses, forcing a series of midnight votes that some Republicans saw as overtly partisan.

When Sen. Elizabeth Warren, D-Mass., asked Chief Justice John Roberts during the trial if he would cast a tie-breaking vote, one key centrist, GOP Sen. Lisa Murkowski of Alaska, was done.

“Enough,” she said later, announcing she would not vote to convict, blaming all sides for what she viewed as a new partisan low.

Trent Lott, the Republican Senate leader during then-President Bill Clinton’s impeachment two decades ago, acknowledges times are different than when his party joined with Democrats to acquit the president of charges stemming from a sex scandal at the White House.

“One thing that’s different we had a center,” Lott said in an interview. “The center has just disappeared.”′

What McConnell rarely did, though, throughout the months long impeachment inquiry, was publicly dispute the facts of the case against Trump.

Democrats say Trump pressured a fragile ally, Ukraine, to conduct political investigations of Democratic rival Joe Biden, or risk losing its U.S. military aid. He then obstructed Congress as it probed a whistleblower’s complaint about it.

But they also said the charges didn’t rise to impeachable offenses and it would be better to let the voters in the 2020 election decide. McConnell and Trump both face re-election in fall.

Ahead of Wednesday’s vote, McConnell told his colleagues, “The United States Senate was made for moments like this.”

Then, without further debate, the Senate voted to acquit.