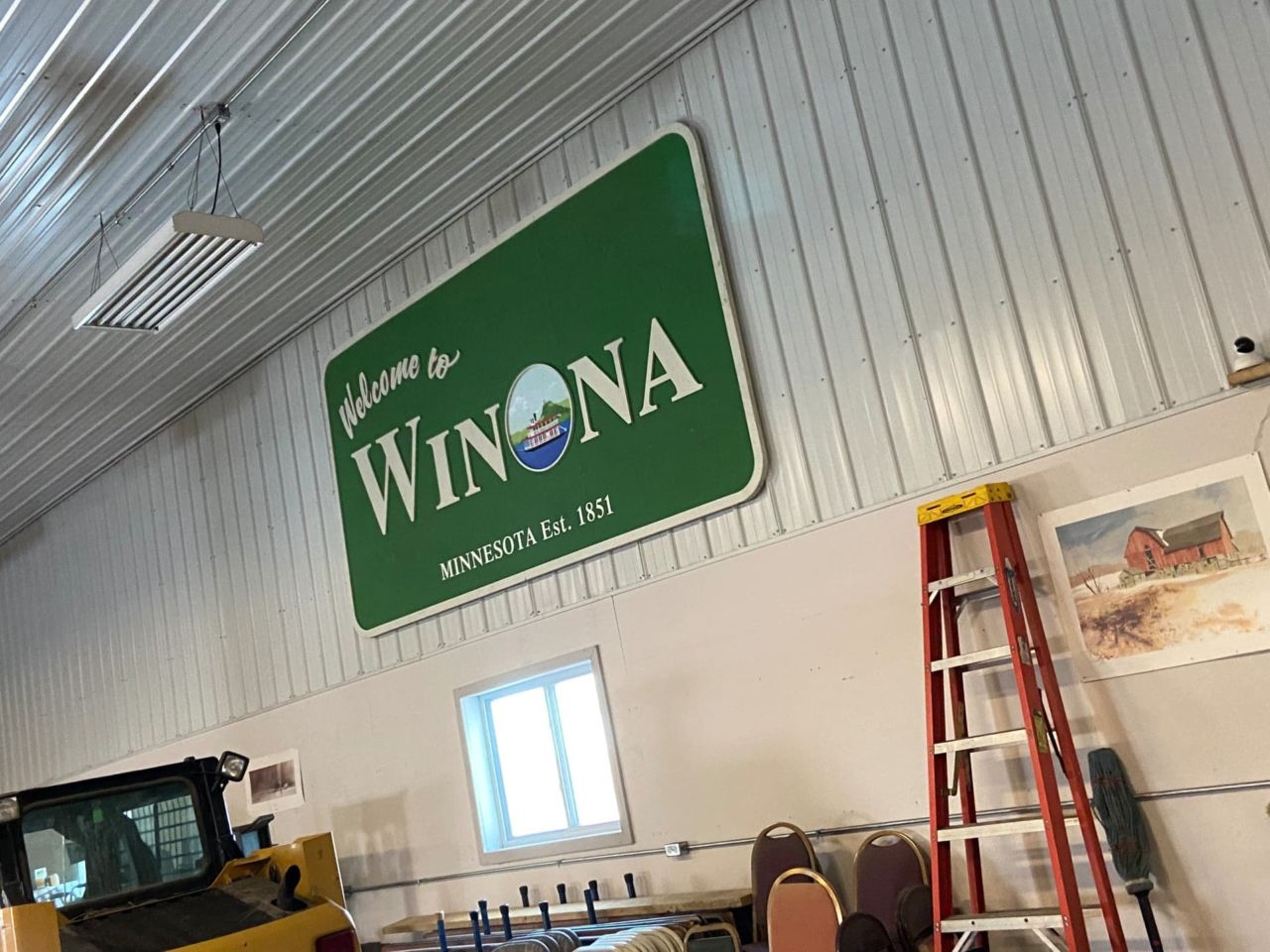 The "Welcome to Winona" sign featured in the Squarespace ad aired during the Super Bowl was fake, but it does exist on the wall of a local's garage (PHOTO: Nick Redig).

That Squarespace ad that played during the Super Bowl with Winona Ryder lying on the side of Winona County 21 above Garvin Heights, didn’t quite feature the city of Winona, but it did have a Winona sign. A fake sign.

Now, it’s nailed to the wall of that friend’s garage with no plans on coming down.

What else was peculiar about that commercial that Redig noticed was the Minnesota Equestrian Center across the road from his farm was missing.

He said they must have edited it out of the commercial. He even had his wife sit with her iPad where that welcome sign used to be to show where the gigantic building rests. Apparently, Squarespace couldn’t find a stretch of Minnesota where there was just fields along the side of the road.

And, while the commercial is obviously trying to be cute, if you were wondering what a police officer would actually do if someone was lying on the side of a Winona County road in the middle of winter, we asked.

Assistant Chief Jeff Mueller, with the Winona County Sheriff’s Department, said it likely wouldn’t be a 10-second conversation from 50 feet away that ended with, “OK then bye bye now.” Well, maybe it would end that way, but they would really make sure that person was OK in every way first.

“Obviously, it would be strange seeing someone out in the middle of nowhere, laying in the middle of the road or laying in a ditch somewhere or whatever,” Mueller said Tuesday on WIZM’s La Crosse Talk PM. “I think we would definitely be approaching with some caution but also with some sense of urgency to see what the problem is.

“First thought, would they need some sort of medical assistance where we might be able to offer them some help.”

Mueller also pointed out that where Ryder was lying was county jurisdiction, not city — a Winona city police SUV pulled up to assist her. Oh, and about that SUV:

“I saw the commercial briefly and yeah that was a city police car, I believe,” Mueller said, “and that wasn’t actually really a city police car, it was kind of a made up one, I think, that they must have brought or got some place.”

So, to sum up, the 30-second Squarespace Super Bowl ad about Winona made a fake Winona sign, brought in a fake Winona city police SUV, Photoshopped out the Minnesota Equestrian Center, but it is giving Winonas free web hosting for a year to anyone who wants it.

The company also had a longer commercial in downtown Winona, but the diner where Ryder talks to a waitress is, apparently, Mickey’s in St. Paul.