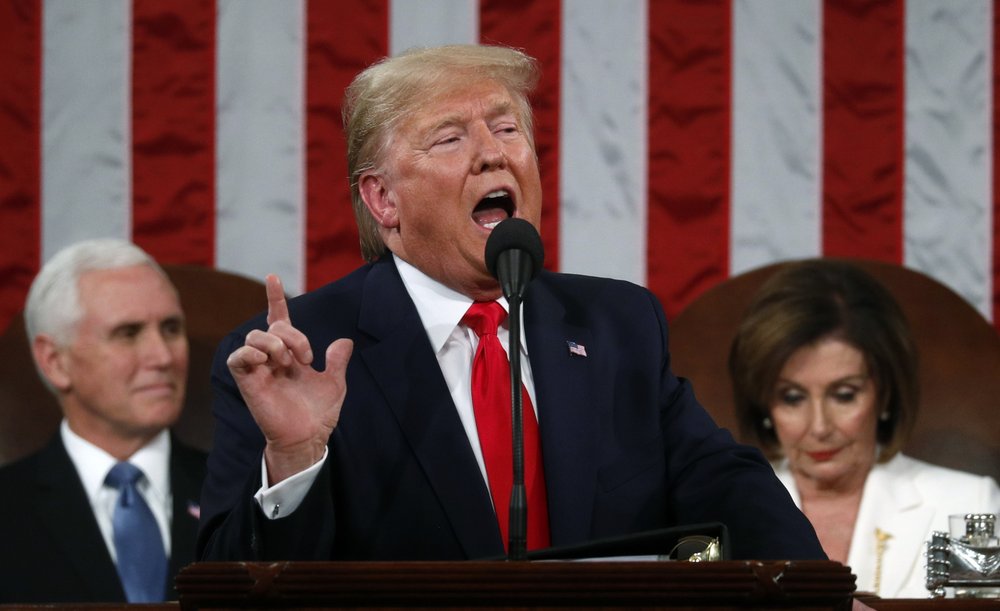 President Donald Trump delivers his State of the Union address to a joint session of Congress in the House Chamber on Capitol Hill in Washington, Tuesday, Feb. 4, 2020, as Vice President Mike Pence and Speaker Nancy Pelosi look on. (Leah Millis/Pool via AP)

WASHINGTON (AP) — The “great American comeback” President Donald Trump claimed in his State of the Union speech drew on falsehoods about U.S. energy supremacy, health care and the economy as well as distortions about his predecessor’s record.

In arguing, in essence, that he has made America great again, Trump took credit for an energy boom that actually began under Barack Obama in an assertion he recycled from his last State of the Union address. He inflated manufacturing gains, misrepresented policy on migrant detention and glossed over a rate of economic growth that has yet to reach the scale he promised.

A look at some of his statements Tuesday night and how they compare with the facts:

TRUMP: “Before I came into office, if you showed up illegally on our southern border and were arrested, you were simply released and allowed into our country, never to be seen again. My administration has ended catch-and-release. If you come illegally, you will now be promptly removed.”

THE FACTS: Not true. Under previous administrations, Mexicans were quickly returned back over the U.S.-Mexico border, while others were held in detention until they were deported. Some migrants from other countries were released into the interior of the United States to wait out their immigration cases.

And despite Trump’s claims that all migrants are now “promptly” removed, there is a 1 million immigration court case backlog, which means many migrants wait up to three years before a court hearing before a judge who will determine whether someone is deported. And after a judge rules a migrant deported, travel papers must be obtained, which often leads to further delays.

As for ending “catch and release,” Trump actually expanded that policy last year during a surge in migrants, releasing thousands of migrants who flooded shelters along the border. The surge has since passed, so fewer people are being held and fewer would need to be released. But an effort by immigration officials to detain children indefinitely was blocked by a judge, so children are still released into the country.

TRUMP: “Thanks to our bold regulatory reduction campaign, the United States has become the number one producer of oil and natural gas, anywhere in the world, by far.”

That’s owing to a U.S. shale boom that has driven production up since 2011, not to deregulation or any other new effort by the Trump administration.

THE FACTS: Trump is being misleading with numbers to tarnish his predecessor’s record. It’s not clear what he means by “working-age.” But the total size of the U.S. labor force shows that the president is just wrong.

During the eight years of Barack Obama’s presidency, the labor force rose by 5.06 million, according to the Labor Department. The improvement reflected a rebounding economy from the Great Recession and population growth.

As the unemployment rate has fallen, more people are finding it attractive to work and joining the labor force. This has enabled the labor force to climb by an impressive 4.86 million in just three years under Trump.

THE FACTS: The president is exaggerating.

The U.S. International Trade Commission examined the deal with Canada and Mexico in an April report. The report estimated that the deal would add only 28,000 auto industry jobs six years after the deal is implemented. Separately, government officials are quoted in the report saying they believe the sector would add 76,000 jobs based on their methodology.

TRUMP: “From the instant I took office, I moved rapidly to revive the U.S. economy — slashing a record number of job killing-regulations, enacting historic and record-setting tax cuts, and fighting for fair and reciprocal trade agreements.

THE FACTS: The U.S. economy indeed is healthy, but it’s had plenty of hiccups during the Trump administration.

Trump never quite managed to achieve the liftoff he promised during the 2016 election. Instead, gains have largely followed along the same lines of an expansion that started more than a decade ago under Obama.

Total economic growth last year was 2.3%. That is roughly in line with the average gains achieved after the Great Recession — and a far cry from growth of as much 3%, 4% or more that Trump told voters he could deliver.

The tax cuts did temporarily boost growth in 2018 as deficit spending increased. But the administration claimed its tax plan would increase business investment in way that could fuel lasting growth. For the past three quarters, business investment has instead declined.

It’s too soon to judge the impact of the updated trade agreement with Mexico and Canada as well as the pact with China. But Trump premised his economic policy on wiping out the trade gap. Instead, the trade deficit has worsened under Trump.

TRUMP: “For the first time in 51 years, the cost of prescription drugs actually went down.”

THE FACTS: Prices for prescription drugs have edged down, but that is driven by declines for generics. Prices for brand-name medications are still going up, although more moderately.

Nonpartisan government experts at the Department of Health and Human Services reported last year that prices for pharmacy prescriptions went down by 1% in 2018, the first such price drop in 45 years.

The department said the last time retail prescription drug prices declined was in 1973, when they went down by 0.2%.

THE FACTS: Not quite.

Manufacturing has slumped in the past year, after having advanced in the prior two years. The president’s tariffs regime and slower growth worldwide hurt the sector in ways that suggest that Trump’s policies robbed it of some of its previous strength.

Factory output fell 1.3% over the past 12 months, according to the Federal Reserve. Manufacturing job gains went from more than 260,000 at the end of 2018 to a paltry 46,000 for the 12 months ended in December, according to the Labor Department. Manufacturers lost jobs last year in Michigan, Ohio, Pennsylvania and Wisconsin — the older industrial states where Trump had promised revival.

TRUMP: “We will always protect patients with preexisting conditions.”

THE FACTS: That’s a promise, not a guarantee.

The Trump administration is backing a lawsuit by conservative-led states that would overturn the entire Affordable Care Act, including its guarantees that people cannot be turned down or charged more for health insurance because of preexisting medical problems.

Trump and congressional Republicans have vowed they will protect people with preexisting conditions, but they have not specified how they would do that.

Estimates of how many people could potentially be affected if “Obamacare’s” protections for preexisting conditions are eliminated range from about 54 million working-age adults, in a study last year from the Kaiser Family Foundation, to as many as 133 million people in a 2017 government study that also included children.

TRUMP: “We will always protect your Medicare and your Social Security.”

THE FACTS: In a recent television interview, the president appeared to suggest that he’s willing to consider entitlement cuts in the future.

During the CNBC interview, Trump was asked if tackling entitlements would ever be on his agenda. “At some point they will be,” he responded.

As a candidate in 2016, Trump vowed not to cut benefit programs like Social Security and Medicare.

In the CNBC interview, Trump said dealing with entitlements would be “the easiest of all things” and suggested higher economic growth would make it easier to reduce spending on the programs.

Soon after the interview, Trump appeared to soften on the issue, tweeting about Social Security: “I have totally left it alone, as promised, and will save it!